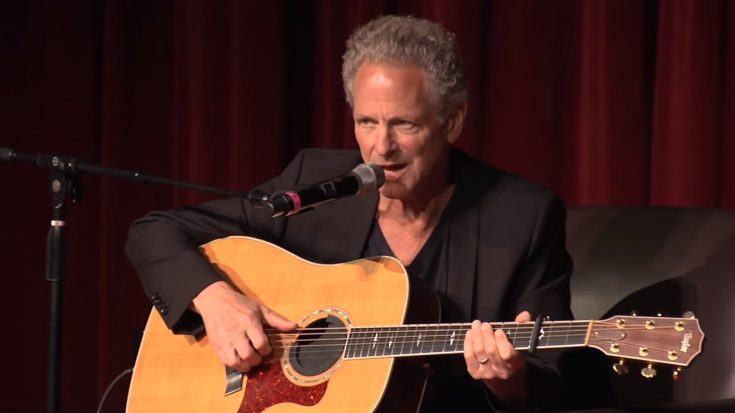 From his tenure in Fleetwood Mac to standing all on his own with his solo albums, Lindsey Buckingham is no doubt, a true rock legend. Aside from his incredible songwriting that touches one’s heart, he is also an excellent guitar player, albeit underrated. While he made such big waves under the umbrella of his then-band, Fleetwood Mac, or his amicable yet broken relationship with Stevie Nicks, Buckingham rose all on his own and deserves the right recognition outside such things. With these, we present 10 facts about the musician’s life that you might not know about.

His Cameo on Saturday Night Live was Hilarious: Bill Hader created a Lindsey Buckingham character on SNL inside a fake BET talk show. At one point, the real Buckingham had a cameo, and it was hilarious to watch.

He Wrote and Performed the classic “Holiday Road”: The 1983 American road comedy film named National Lampoon’s Holiday made use of Lindsey’s famous song “Holiday Road.” Check out the MV below.

Stevie Nicks Was a High School Girlfriend: Before establishing their own fame, the two met when they were a couple of high schoolers and formed a band called the Fritz. After their disbandment, the two would pursue music and create a duo called the Buckingham Nicks.

His Musical Collaboration with Nicks Bore a Rare Gem: With a nude cover photo, the duo’s Buckingham Nicks is one of the most sought-after albums in the history of bootlegs. The rockabilly mixed with the folk genre is stupendous to hear.

Lindsey was “More Than Ready” to Negotiate with Fleetwood Mac To Let His Partner Stevie Join The Band: Putting his feet down, Lindsey Buckingham told future bandmate Mick Fleetwood that he won’t join the band unless Stevie Nicks will be invited to since there was a “package deal.” Fleetwood approved and the rest is history.

He Once Helped His Idol Make a Comeback: With him becoming popular in the 70s, it was only fair for John Stewart, who was a part of Buckingham’s favorite Kingston Trio, to ask his help with an album. Bombs Away Dream Babies is co-produced by the guitarist, and he also sang and played guitar in it.

His Family Has a Thing For Competitive Swimming: Just like his brothers Greg and Jeff, Lindsey also participated in competitive swimming at a young age. He, later on, focused on music though, which came out good for him.

Several Punk Artists Inspired the Tusk LP: Tusk became well-known for two reasons. First, it’s the costliest album ever produced in the music industry, with a whopping amount of up to a million dollars. Second, he was inspired by a lot of punk artists who were making names in the punk world. He was “desperate” to make Mac relevant inside it.

He Dedicated his album Go Insane to Another Ex-GF: After the success of his first solo album, Lindsey Buckingham ventured on a more personal side with Go Insane, an album dedicated to his ex, Carol Ann Harris, whom he met during Rumours sessions. Its lyrics spoke about heartbreak and finding a hard time to move on.

He Prefers Not to Use Picks: Unlike the typical guitarist sense, Lindsey opts to give his songs a smooth rhythm of fingerpicking. Guitar maker Rick Turner even designed a guitar specifically to cater to Lindsey’s needs, which he still plays today.