10 Surprising Facts About Rock and Roll 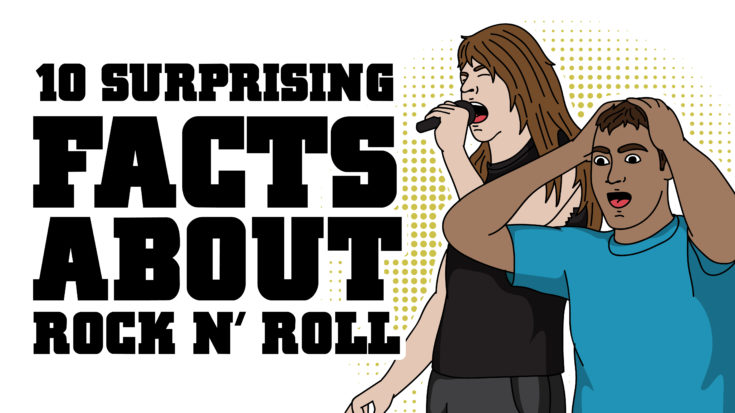 Get Ready To Be Mind-Blown

If you think you already know everything about rock ‘n roll, you might want to stop and think again. In an industry with so many secrets and half-truths, we present to you some lesser-known facts. It’s not life-changing but hey, it’s good to know. Add these to your pool of classic rock knowledge.

Whether it’s about what your favorite rockstar did when no one thought they’d make it big OR breaking world records, we got you covered.

Axl Rose may be worth $150 million today (thanks to successful and sold out shows with Guns ‘n Roses and AC/DC) but once upon a time, he was an ordinary citizen like you. Although he didn’t do not-so-glamorous work like Kurt Cobain (he used to be a janitor) or David Lee Roth (he was once a hospital orderly), it’s interesting what he did before he became Axl Rose the Rockstar.

When he wasn’t working as a Sunset Boulevard Tower Records night manager, he also participated in a scientific experiment conducted in UCLA by smoking cigarettes. He reportedly made $8 an hour.

“I’m late to everything. I’ve always wanted to have it written in my will that when I die, the coffin shows up a half-hour late and says on the side, like in gold, SORRY I’M LATE.” – Axl Rose

He probably looked cool while doing it too. And well, he was doing it for science, people!

9. The Doors were the first to try billboard advertising

The Doors was legendary for a lot of things including Jim Morrison’s crazy antics on top of his oozing charm and sex appeal. And they were actually the first group to use billboard as an advertising medium for their debut album which was released in 1967. It was all thanks to Jac Holzman, the founder of Elektra Records.

“The eponymous debut of The Doors took popular music into areas previously thought impossible: the incitement to expand one’s consciousness of opener ‘Break on Through’ was just the beginning of its incendiary agenda.” – BBC Music’s Sean Egan

Holzman then reserved a spot near the Chateau Marmont hotel which cost $1200/month. Sure it’s a bit expensive but it was worth it because according to him, that would catch the attention of disc jockeys passing by the street on their way to work.

He further said that it was “a calling card for the artist, but it was a very large calling card.”

8. The Strokes took a guitar riff from Tom Petty for one of their hits

You know you’re influential when younger artists swipe some of your classic hits. That’s pretty much what happened to Tom Petty. You’ve probably heard about Sam Smith and his unintentional rip-off of “I Won’t Back Down” which ended up in an out-of-court settlement. But that’s not all there is to it because Red Hot Chili Peppers’ “Dani California” bore resemblance to “Mary Jane’s Last Dance” – it was so blatant that Petty at one point considered filing a lawsuit.

And then comes The Strokes with their “Last Nite” song. They borrowed the opening riff from “American Girl” without asking permission.

“The Strokes took ‘American Girl’ [for ‘Last Nite’], there was an interview that took place with them where they actually admitted it. That made me laugh out loud. I was like, ‘OK, good for you.’ It doesn’t bother me.” – Tom Petty

Can we all just take a moment to appreciate how Tom Petty’s probably the most chill guy in rock history? That just made us miss him more.

“Wild Thing” was a huge hit for rock band The Troggs since it topped the Billboard US 100 and peaked at #2 on the UK Singles. It was originally recorded by The Wild Ones but didn’t make it to the charts.

It was written by Chip Taylor who is the brother of Jon Voight, Angelina Jolie’s father. Taylor was born James Wesley Voight so there’s that.

“I started just chuggin’ away on a couple of chords and within a couple of minutes of getting off the phone I had the chorus and I was kind of likin’ it. I didn’t really know what I was going to say in between but I was thinking there was something cool and sweaty about this.” – Chip Taylor

Yes, we already heard all the Jon Snow jokes where he sings “Wildling” instead of “Wild Thing.” And we find that utterly funny, by the way. It still doesn’t take away the fact that The Troggs made a classic out of this.

6. Nirvana got kicked out of their own release party

Would you believe WHY? The listening party was held at the Rebar in downtown Seattle. From the start, it was bound to be a disaster since Kurt Cobain and the rest of the guys were known for their little acts of mischief. The night started out great with the group signing autographs and acting like friendly hosts. But with the continuous flow of alcohol, things went bad real quick.

They began tossing a watermelon filled with ranch dressing and so, one thing led to another which inevitably ended up in a food fight with people throwing tamale and guacamole at each other. They were then escorted by security to the door.

“We were laughing, saying ‘Oh my God, we just got kicked out of our own record release party!” – Krist Novoselic

Then again, the album was a huge success so maybe we can make allowances for the boys. Maybe they were just celebrating in advance?

Not everyone can play musical instruments but you know what’s even rarer? Someone who can play almost anything and is actually good at every single one of them. The Rolling Stones co-founder Brian Jones is hands-down, a genius.

“There were at least two sides to Brian’s personality. One Brian was introverted, shy, sensitive, deep-thinking. The other was a preening peacock, gregarious, artistic, desperately needing assurance from his peers.” – Bill Wyman

In Jimi Hendrix’s “All Along The Watchtower,” he’s the one on percussion and when you hear the “thwack,” that’s him. He even taught Mick Jagger how to play the harmonica! He was clearly overflowing with talent. But substance abuse led to behavior changes which in turn caused problems for the band and so he was booted out.

It’s not uncommon for rock stars to pursue other passions. Take Alice Cooper, for instance. When he’s not wearing full-face make up and rocking out with his band on stage, he’s serving hotdogs in his restaurant. Another shining example is The Pixies drummer David Lovering.

When he’s not busy slamming behind the kit, he transforms into a magician called The Scientific Phenomenalist. His interest in magic began when a friend brought him to a convention.

“It’s all kind of upbeat, really weird physics experiments that you’ll never see. […] I’d rather have them [the audience] going ‘Is it [magic] or isn’t it?’ rather than ‘It’s all science’ or ‘It’s all magic’. So I do kinda weird things that other magicians don’t do.” – David Lovering

His performances often involve scientific experiments and machines. Aside from being one of The Unholy Three, he also toured all over the United States performing magic. Who would have thought?

Paul McCartney could easily make $4 million in every city he performs in. So when you think about it, his performance during the 2012 London Olympics Opening Ceremony is essentially a donation. To say that he was paid a small amount is basically an understatement. Actually, all the artists at the event agreed to play for free but the nominal fee was given for the purpose of binding a contract with the organizers.

Unfortunately, there were problems encountered while he was performing “Hey Jude.”

Unless you’re Paul McCartney, that’s an unforgivable mistake. But we’ve seen him at his best and we’re here to tell you, someone should have taken care of that bloody bell.

2. Queen has the longest running fan club in rock history

Classic rock fans are a fiercely loyal bunch which is evidenced by the cult following of Queen. Guinness World Records tagged The Official International Queen Fan Club as the “Longest-Running Rock Group Fan Club.” That’s not even surprising. You only have to remember how many people showed up during the group’s concerts.

It was founded back in February 1974 after Queen released their debut studio album. They weren’t your ordinary club members because the organizers took everything seriously – from issuing quarterly magazines to selling merchandise and organizing annual conventions, it still continues to exist today.

“The fan club is like a extended “family” for all Queen fans – our Members Only website has a friendly forum and chat room, and all our members are happy to share their love of all things Queen with everyone!” – The Official International Queen Fan Club website

They even organize parties during special occasions like Freddie Mercury’s birthday. And of course, you can find numerous collector’s items in their site.

1. Malcolm Young once worked in a bra factory

We started this list with an odd pre-rockstar job and we’ll end it with another. You see, legend has it, anyone who has seen Malcolm Young play live immediately wanted to be a guitarist. He’s good at his craft and we all know he’s part of the reason we got to enjoy the music of AC/DC. If it weren’t for him and his brother, Angus, the world would be a darker place to live in.

Before they were recording timeless songs and filling stadiums, he worked at a bra factory as a mechanic. Yes, you read that right. He was just 15 at the time.

“Malcolm’s really underrated. He makes the band sound so full, and I couldn’t ask for a better rhythm player. Sometimes I look at Malcolm while he’s playing, and I’m completely awestruck by the sheer power of it.” – Angus Young

Well everybody has to start somewhere. And because of his time working in factories, he would refer to his ‘job’ with AC/DC as a “nine-to-five sort of gig.”