10 Rock Artists Who Changed Their Genre 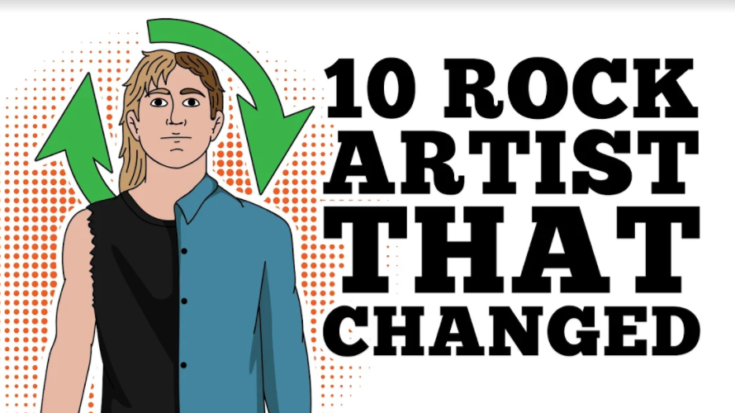 We Have Some Risk-Takers Here

Steven Tyler going country isn’t exactly something we consider shocking. Switching genres even at the height of their career isn’t new. Consider Bob Dylan for example, before he became a rock legend, he was a folk icon. And if not for his foray to another territory, what would we be without all his epic masterpieces?

Besides, there are numerous artists who thought about going to a different musical direction but not everyone has the guts to actually do it. Loyal fans would feel betrayed and they’re not quite sure if their new records would sell. Of course it’s a given that there will be a fair amount of haters bashing them no matter how good their sound is.

The point here is, it’s not the end of the world if rockstars decide to dip their toe into other genres. It might work or it might not but you can’t please everybody – that’s how it is whether you switch your style or not. So here are 10 artists who are brave enough to depart rock either temporarily or permanently and vice versa.

Darius Rucker is a founding member of Hootie & The Blowfish, an American alternative rock band which formed back in 1986. Aside from selling 21 million records in the United States alone, their debut album wasn’t just a huge commercial success but it was also certified platinum 16 times. During the 1996 Grammy Awards, the group also bagged the “Best New Artist” Award.

It was Rucker’s signature baritone voice which made their music unique and distinctive.

“You see a lot of people doing a one-off, saying, ‘This is my country record.’ But this is a career I’m trying to build. The people that say that they don’t get it, I’ll let the music speak for itself. I plan to do a lot of country records.” – Darius Rucker

His first solo album was R&B and a few years later, he signed to Capitol Records Nashville. It was the start of his country music career. No matter what the initial reaction was, he proved all the haters wrong especially when his album “Learn to Live” achieved gold certification status.

Kid Rock isn’t exactly a true-blue rocker. He started with hiphop then went rock and today, he’s a country musician. His rap-rock album “Devil Without A Cause” was certified platinum 11x and has sold over 9.5 million copies.

His Southern rock track “All Summer Long” sampled Lynyrd Skynyrd’s classic “Sweet Home Alabama.” In 2015, he released his first full-fledged country record although he’s had a few country hits prior.

“I think rock radio missed the boat. You listen to these country artists – they’re fucking playing rock music! If they would embrace that, I don’t know if you’d call it ‘heartland rock,’ but they gotta mix it up a little bit. But [nu-metal bands have] stuck with heavy shit that’s not melodic and doesn’t stand the test of time.” – Kid Rock

To be fair, we think he found his sound when he went ahead and pursued country music. His songs sound amazing and while we love some of his rock hits, we still think he made the right choice.

The Bee Gees started out as a trio worthy of comparison to The Beatles. In fact, their folk rock debut single “New York Mining Disaster 1941” was played in heavy rotation because there were DJs who thought it was from The Fab Four. They followed it up with some ballads and pop tracks. But they were more than ready to take on the world.

In the ‘60s, after some falling out, Robin Gibb pursued a solo career but in 1970, they got back together.

“We just discussed it and re-formed. We want to apologise publicly to Robin for the things that have been said.” – Maurice Gibb

But they weren’t as big as they were before. Their new records had poor sales and they were starting to play in smaller venues. And in the mid-‘70s, the band went disco. No one saw it coming, of course. “Jive Talkin’” shot up to number 1 and they were back in the game. Barry’s falsetto voice even became their trademark!

The Byrds were pioneers of folk rock as they fused traditional folk with music from bands associated with the British Invasion. They were also influential figures in psychedelia. It was “Mr. Tambourine Man” which became the template for folk rock. From the harmony singing to the impressive songwriter – they were definitely the next big thing.

At the height of their career, their songs were on heavy rotation and since they had numerous teenage fans, they graced the covers of teen magazines. There were several lineup changes but when Gram Parsons joined the band, he wanted the fusion of rock and country.

Their foray into country music was met with hostility though. And all the while, there was some power struggle going on. Still, they will be remembered as highly influential especially during the ’60s.

If the previous artists made their move from rock to other genres or subgenres, it’s the opposite for the Godfather of Punk. He started out as a drummer in several bands including The Prime Movers where they played the blues. After moving to Chicago, he played in blues clubs.

All that changed when Iggy Pop saw Jim Morrison perform with The Doors.

“I attended two concerts by the Doors. The first one I attended was early on and they had not gotten their shit together yet. That show was a big, big, big influence on me. They had just had their big hit, “Light My Fire” and the album had taken off….” – Iggy Pop

And well, the rest as they say is history. The first two albums of The Stooges had poor sales but “Raw Power” changed the game. Sure it wasn’t exactly a commercial success but this is when people started noticing the group and of course, when they began getting a serious following.

There are several reasons why someone would shift from one genre to another. Maybe because they want to ride the trend and go mainstream OR they’re still finding their identity as musicians – either way, sometimes it’s inevitable if they want to evolve.

So anyway, The Beastie Boys started as head-shaved hardcore punks then became a hip hop group. The 1982 Polly Wog Stew was good but when the track “Cooky Puss” became a hit in clubs, they started incorporating rap into their music. Their debut studio album “License to III” was the first LP to ever dominate the Billboard charts.

“Licensed to Ill remains the world’s only punk rock rap album, arguably superior to Never Mind the Bollocks … knowing that apathy and slovenliness were just around the corner.” – Q Magazine

See? Not all changes are bad. For The Beastie Boys, whatever risks they took paid off nicely. Besides, they became huge and influential in the hip hop scene.

It’s all in the name – The Moody Blues started their music career playing soulful blues. “Go Now” catapulted them to fame. On one side of their debut album, all the tracks were R&B covers. There were lineup changes and financial challenges along the way but when they came up with their second album “Days of Future Passed,” it was a game-changer.

It was their first concept album but it was also often cited as the beginning of progressive rock.

“… the LP was — totally accidentally — timed perfectly to fall into the hands of listeners who were looking for an orchestral/psychedelic recording to follow works such as the Beatles’ Sgt. Pepper’s Lonely Hearts Club Band. Better still, the band still had a significant backlog of excellent psychedelic-themed songs to draw on.” – AllMusic’s Bruce Eder

“Days of Future Passed” was a huge commercial success, earning them a gold record. Money poured in and not only did they manage to settle all their debts but also laid the groundwork for prog-rock.

Eddie Vedder impressed Chris Cornell during his audition for Temple of the Dog. Then again, who wouldn’t be? The man had spine-chilling, incredible vocals. And it’s pretty much what made Pearl Jam aside from their classic hits.

They became front-runners in grunge and it was as if they suddenly found themselves with a cult following. In 2011, Vedder released his second solo album called “Ukulele Songs.” It featured original tracks and cover songs played with the ukulele.

“The ukulele doesn’t allow for the widest range of expression, which makes it a challenging foil for Eddie Vedder, who never met a feeling he couldn’t drive through a wall. But this uke-suffused album stands up because he adapts the instrument to his idiosyncratic needs.” – The Rolling Stone magazine

It was a pretty good record but obviously different from what they’re used to hearing from him. As a promotion for the album, he toured but it wasn’t as big as that of Pearl Jam’s. The venues were smaller which is actually what he preferred.

Some people reacted to the news of Steven Tyler going country as if it’s the end of the world. Well, say what you want about this Aerosmith frontman but he actually has the balls to do what he wants and he doesn’t even bother with the haters.

The thing is, for decades, he wasn’t just a rockstar – he was living the rock ‘n roll lifestyle from drugs to women and luxury cars. And suddenly, fans felt betrayed because it’s like he became ‘soft’ and it’s not the image they want to remember.

“Country songs really spell out what’s on a guy’s mind in no uncertain terms. Rock & roll can be a little more aloof. But country is changing… I think country is the new rock & roll — everyone is trying to stretch out.” – Steven Tyler

Putting all biases aside, it’s a good song and it’s way even better when Tyler sings it live. To say that he still has it is a bit of an understatement. Now we’re convinced he can switch to any genre and still slay it.

Our favorite chameleon – David Bowie is perhaps the only rock act who can jump from one genre to another and still pull it off spectacularly. He was never one to conform to rules and so he did what he dang well pleased. And of course, we loved him for it.

From glam rock, soul and funk to electronic, new wave and pop, he was unafraid of trying out something new and different. He even went disco! Also, he collaborated with numerous artists like Freddie Mercury, Tina Turner, Mick Jagger and Iggy Pop. If there’s one word to describe Bowie, it would be ‘versatile.’

He’s just too big of an artist to be confined in a box, let alone one genre. And thanks to that, he has given us a diverse catalog with numerous masterpieces.