10 Mind Blowing Facts You Might Not Know About These Artists 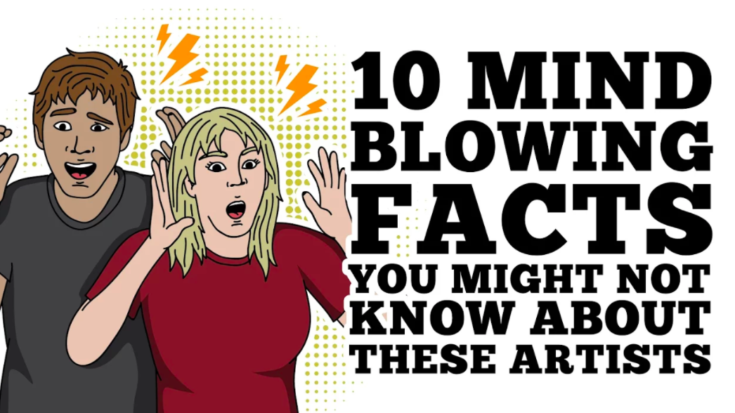 I didn’t know that!

1. Bono got his nickname from a hearing aid store

The world will forever know the U2 front man and iconic rockstar as simply “Bono”, but not everyone knows he was born Paul David Hewson. After his mother’s death and the fall out of his relationship with his father, Paul decided to get a new name. It was originally going to be ‘Steinhegvanhuysenolegbangbangbang,’ ibut luckily for the him and the rest of the world, his nickname evolved to ‘Bonavox of O’Connell Street’ after a hearing aid store in the centre of Dublin. Eventually, it was shortened to ‘Bonavox,’ ‘Bono Vox’, a cockeyed Latin for ‘good voice’ – and finally ‘Bono.’ Imagine U2’s lead singer being called ‘Steinhegvanhuysenolegbangbangbang’, that’s going to be decades of a mouthful introduction.

2. Malcolm Young worked in a bra factory as a sewing-machine mechanic.

The AC/DC co-founder and rhythm guitarist also worked at a factory but of a different kind – a bra factory.
No, unfortunately for most, Malcolm Young did not make the bras himself. He was employed as a mechanic for the sewing-machines that made the bras. Close enough. It probably makes for a good songwriting inspiration for the hard-rocker. Or not.

3. John Lennon would sometimes sleep in a coffin

Not in a morbidly horror-movie way like a vampire but more like a prank. According to Allan Williams, one the first managers for the Beatles, John had a knack in sleeping in an old coffin that was in the premises of Williams’ coffee bar “The Jacaranda” in Slater Street, Liverpool. The Beatles were frequent performers in “The Jacaranda” in the late ’50s and as a gag, John would frequently nap in it during his down time.

"Hey you've got to hide your love away…" #johnlennon #hideyourloveaway

4. Elvis Presley recorded over 600 songs, but wrote zero of them.

The King of Rock and Roll may have hundreds of hits under his belt but it may be shocking to discover that Elvis never wrote any of those songs. Elvis is one of the greatest performers of all time, but he was never a songwriter. He does have some songwriting credits on some of them but they were co-writing credits that was just part of the deal his manager Colonel Tom Parker struck with the real songwriters and the record label. It’s good to remember that even though Elvis didn’t have a hand in creating original music, he did bring them to life and even immortalized many of them. Long live The King!

5. Prince was sued by his own sister

In 1987, a legal battle ensued between the “Purple Rain” singer and his half-sister Lorna Nelson over the lyrics of Prince’s hit song “U Got the Look” from his “Signs of the Times” album. Lorna claimed she was the one who had written the lyrics to the song and that Prince infringed on her copyright to an unpublished song she wrote called “What’s Cooking in this Book”. The sister filed a federal suit on the gourds of copyright infringement. In the end, the court sided with Prince, and the judge threw out the suit ruling that no substantial similarity exists between the song lyrics of the “U Got the Look “ and “What’s Cooking in this Book”, as contested by Lorna.

"To me, [Jimi] almost seemed like a movie star. He had a certain air." ~ Susan Tedeschi (@hairface31) #JimiHendrix #Atlanta #Freedom #IAmExperienced #moviestar #legend

Sir Elton Hercules John was actually born Reginald Kenneth Dwight or “Reggie” as he was called. When the Rocket Man was just a pianist in the band Bluesology, he teamed up with lyricist Bernie Taupin in 1967, and that was when he decided to devise the stage name Elton John, eventually changing it permanently. He derived Elton John from merging the names of blues legendary saxophonists Elton Dean and Long John Baldry. For his middle name “Hercules”, he derived it from the horse named Hercules on the British TV sitcom “Steptoe and Son”, not the demi-god from Greek Mythology.

I absolutely LOVE playing live. The quality of every performance is always super important to me. The #EltonLive playlist (link on my bio) collects performances from over the years, so I hope you enjoy it! #live #music

8. Brian Jones was proficient in over 60 musical instruments.

One of the original members and co-founder of the Rolling Stones Brian Jones is an actual musical genius. He was an amazing multi-instrumentalist who could literally play any instrument he could pick up. If Jagger and Richards were the ones who wrote their popular hits, Brian was the one who came up with the new sonic textures and sounds for the band’s songs. If you hear anything interesting in The Rolling Stones records, that was most likely Brian experimenting with a new instrument. Some of the instruments he can play, and play well, include the guitar, slide guitar, piano, sitar, tamboura, organ, bells, dulcimer, harmonica, mellotron, xylophone, marimba, recorder, clarinet, percussion, harpsichord, kazoo, trumpet, trombone, tuba, the sax, and many more.

It was already during the downward spiral of Cobain’s mental and physical state and he’d gone to rehab back and forth several times. In July 1993, Nirvana was scheduled to perform a show in New York City. A few hours before the show, Kurt accidentally shot too much heroin and had an accidental overdose. It was his wife Courtney Love who found him unconscious in the bathroom of their hotel room. She then attempted to revive him with a Narcan injection and punched him in the chest. This resuscitated Kurt went on to perform later that night at the Roseland Ballroom as if nothing had happened. Nobody even knew the difference.

On Kurt’s left forearm you might notice a K tattoo. Most believe it stood for the first initial of his name, but in fact it represented the indie label K Records based out of Olympia, WA. Kurt said it was “to try and remind me to stay a child.”

Just jumble up the letters and you’ll see. Oh and his real name is William Bailey.