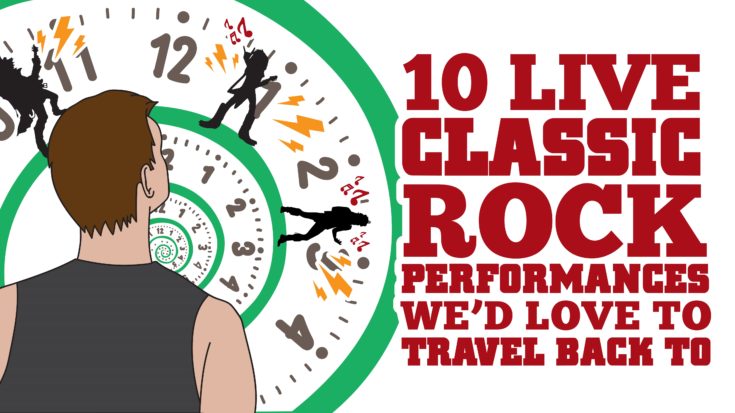 Get Ready To Headbang!

These rock acts raised the bar in live performance. For some of them, it isn’t just about music – they’re into theatrics and even dangerous stage antics.

If anyone has a time machine, you know what to do.

These guys were many things but ‘boring’ isn’t one of them. From Pete Townshend’s ritual guitar smashing to Keith Moon’s penchant for blowing up toilets, they as destructive as any rock band can get. So when they say they want ‘to go out with a bang,’ you know they mean it in the most literal sense of the phrase. When viewers of The Smothers Brothers Comedy Hour saw the group on national TV on September 17, 1967, they probably weren’t expecting this type of ‘explosive performance.’

Keith Moon’s drum erupted (because it contained three times the ‘usual’ firepower), and Townshend smashed his guitar into pieces. He said in a VH1 interview, “The Smothers Brothers had a fairly radical show at the time and they bravely asked us if we would destroy our instruments. Keith [Moon] persuaded the pyro-technician on the show to make a cannon, which he put inside his drum. And in the rehearsal it went bang, but it kind of made a lot of smoke and a bit of a dull thud. And Keith said, ‘Listen, you must increase the charge.”

Aside from being a musical genius and brilliant songwriter, this is yet another reason why Freddie Mercury is a legend. He’s not just a performer or entertainer, he is a certified showman. There are no theatrics, stage antics (although he did perform while riding on Darth Vader’s shoulders once) or mind-blowing visuals. In fact, his only prop is a bottomless mic stand. But dang, he stole the show at Live Aid on July 13, 1985.

It was something people would never forget even those who didn’t make it to the event. He left the audience gazing at him in awe and wonderment – like they’ve just had a once-in-a-lifetime religious experience. Even with so many legendary performances under their belt, this is undeniably Queen’s finest moment – one that effectively secured their spot as one of the greatest rock acts of all time. According to guitarist Brian May, “That was entirely down to Freddie. The rest of us played okay, but Freddie was out there and took it to another level.”

This gave us goosebumps. The raw emotion hits you right in the feels. If there were those who doubted the legend that is Nirvana, on November 1993, they became instant believers. It’s deep and visceral and not something you see every day. Therefore, it’s not surprising that this version is the one that received the most airplay. It’s a pinnacle moment for the band especially Kurt Cobain.

Don’t you just miss those days when music was THIS good? You can hear so much emotion in his voice and it just gets to you. And Dave Grohl’s drumming is stellar too – he doesn’t come across as showy but with those nice fills, there’s no doubt he’s an excellent drummer. It’s subtle but amazing all the same. This isn’t our first time listening to this masterpiece but man, we get chills every single time and it almost moves us to tears. How can anything sound so perfect?

Pretty much like The Doors’ frontman and vocalist, this live performance is nothing short of controversial. Although to be fair, that’s nothing new. Nevertheless, their appearance on The Ed Sullivan Show on Sept. 17, 1967 somehow shocked viewers and even the show’s producers. It definitely didn’t go on as they planned because if there’s anything we know about Jim Morrison, it’s that he’s highly unpredictable – you never know what stage antics he’ll do next.

The rehearsals actually went well and a few minutes before air time, they were told to change the lyrics in “Light My Fire” from “Girl, we couldn’t get much higher” to “Girl, we couldn’t get much better”. Of course, Jim being Jim, he sang the original words. When told that they were banned from appearing in the show in the future and that the producers were actually thinking of booking them for six more times, Morrison responded: “Hey, man, we just did the Sullivan show.”

This actually needs no introduction. We all know Jimi Hendrix’s epic and guitar-driven performance of the National Anthem at Woodstock in 1969. That year, he was the highest paid musician and he headlined the legendary music festival. He was definitely at the top of his game. During his appearance at the event, he wanted to replicate the sounds of bombs and rockets so he used distortion and amplifier feedback.

It was electrifying, to say the least – too bad only few people were left to witness his greatness. However, not everyone was pleased. There were those who believed that it was a deep political statement in protest of the Vietnam War. Three weeks later, however, Hendrix explained: “We’re all Americans … it was like ‘Go America!’… We play it the way the air is in America today. The air is slightly static, see.” Up until today, no one can top Hendrix’s version of the ‘Star-Spangled Banner.’

This is a real classic, any way you look at it. You may have seen this song performed a couple of times but nothing can beat this version. It’s captivating and absolutely magical. This is Led Zeppelin at their finest moment! Sometimes though, you can’t help but wonder if Jimmy Page’s violin bow is actually a magic wand because the sound it produces is almost otherworldly. We’ve never wanted to be like him so badly! The man’s talent is beyond us.

But that’s not to say the rest of the band weren’t stellar too. In fact, they brought so much into this show that we can’t help but be blown away. It’s utter perfection and let’s be honest, very few rock acts can hold a candle to these guys. They’re simply on another level. With its power and intensity, you’d think this version of “Dazed and Confused” is their tour de force.

We cannot say ‘brilliant’ enough. We can’t even begin to describe how enchanting the guitar solos are. Three decades later, nothing can ever come close to this performance. Pink Floyd is famous for their elaborate and grand concerts and live shows. They’re considered as one of the first rock acts who made use of colorful lights and photo effects which were ahead of its time.

The Wall tour may have had only 31 shows but it was psychedelic rock on a grand scale. According to Roger Waters, “It couldn’t possibly travel because of the sheer expense of getting this thing to move. It was miles ahead of anything that had been done in rock ’n ’roll and the amount of effort that went into every single detail was unheard of. It was very f—ing difficult to do but we had some very good people on board who made it happen.”

This was a way for The Beatles to ‘test the waters’ if they can be as big in America as they were in Europe. Of course, the moment they appeared, there was no doubt that it sealed the deal – the Beatlemania has spread to the US. This ground-breaking performance also gave Ed Sullivan the highest ratings for his show and it’s been reported that around 73 million people watched it thus making it an iconic moment in TV history.

There’s not a shred of doubt that they’re one of the best bands to ever walk this Earth and those screaming fan girls surely had the time of their lives! What a lucky crowd! George Harrison also shared, “And I’ve heard that while the show was on there were no reported crimes, or very few. When The Beatles were on Ed Sullivan, even the criminals had a rest for ten minutes.”

This time, we are totally serious about getting our hands on a time machine. We just love witnessing beastly and electrifying performances such as this. The energy is so high and the experience incredible – everyone in the audience probably became instant storytellers afterwards. Some people (or let’s call them haters LOL) claim that there’s nothing great about this because the beat and rhythm are way too simple.

Well, Danny Carey did a mighty fine job behind the kit. He makes it look easy but in truth, it’s anything but. And Maynard Keenan’s voice gave us goosebumps. This is definitely Tool at their prime – everything is raw and powerful. This is proof that you don’t need special effects to create a massive sound. We’re pretty sure the band has plenty of incredible, mind-blowing shows but we think this is the best version of this track. It’s like being part of an amazing musical ride.

This concert is hands-down epic. Imagine being part of that massive crowd! This was taken on Sept 28, 1991 at the Monsters of Rock Festival held at the Tushino Airfield in Moscow. Considered as one of the biggest concerts of all time, Metallica opened their set with this track much to the delight of the crowd (estimated attendance between 500,000 to 2 million).

To sum up their entire performance, well, they put on one heck of a show. It’s definitely one for the books. So if you’re trying to make a list of their best concerts, this will easily make it into the top 5. It’s metal at its finest. You know what else we love about this? There were no smartphones at the time therefore everyone was just enjoying the music. Let’s be honest, it’s hard to find this much energy and passion from the audience such as this. Oh good times!