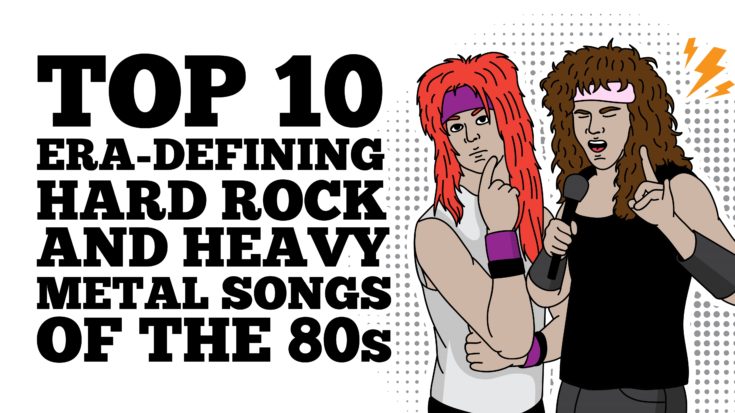 What Was Your Favorite Jam?

The criteria is simple: it should embody the 80s. You know, when you hear it, you automatically think of this decade and how influential the track is at the time of its release. From big and loud hairstyles to tight pants and leg warmers, let’s take a trip down memory lane and find out which songs best represent the golden age of hard rock.

Cheers to the song that eventually became the definitive Motörhead anthem. It was Lemmy Kilmister’s way of showing the world they weren’t here to follow anyone’s footsteps. They won fans over because of their no-nonsense approach to hard rock. Nothing flashy or cheesy – they were all about unleashing that blunt power, furious speed (which actually turned out to become their signature sound) and boundless energy.

Fun Fact: Q Magazine wrote about the track saying, “This song has an intro which wouldn’t be out of place ushering in the end of the world.”

This is the title track of the album that broke them. And it was chaotic and unrepentant. It’s like if all hell broke loose, this is the song you can hear playing in the background.

Let’s give credit where it’s due. Mötley Crüe and their penchant for overindulgence and basically anything excessive was legendary. But then again, so was their music. Before making this album, they were all about girls, parties, drugs and alcohol. But during recording, they knew they needed to get their acts together and so they did.

“I knew it was a classic from the time I heard that very first ‘bomp bomp bomp bomp’ — that intro just kind of grabs you. This song has been popular for 20 years. It was funny because I was watching VH1 and they had the Greatest Hard Rock Songs and ‘Feelgood’ was 15 or something. I was like, ‘Wow, of all time.’ Then you have Led Zeppelin and Aerosmith and AC/DC and ‘Feelgood.’ I was like, ‘Wow, that’s cool.’ It’s our signature song in some ways.” – Vince Neil to Rolling Stone

Well, it sure paid off nicely. It became their highest ranked single and also received gold certification from the RIAA.

Even if the song stopped after Angus Young’s first guitar note, this would still be a brilliant masterpiece. Decades after it was released, people still crave for it like gooey, melty grilled cheese or salted butter popcorn. You just can’t get enough of it. Besides, it was the first single that featured their newest frontman, Brian Johnson. So what better way to introduce him to fans than having him belt out this beast of a track?

“The boys had a title. Malcolm and Angus [Young] said, ‘Listen, we’ve got this song. It’s called ‘Shook Me All Night Long.’ That’s what we want the song to be called.’ And if you listen to the chords, [the chorus] just fell into place so I can’t claim any credit on that thing. It was as quick as it had to be, which was that night. I guess I had to try and impress somebody. It was just a thing that came at the time, and I still think it’s one of the greatest rock and roll riffs I’ve ever heard in my life.” – Brian Jonson to Absolute Radio

It’s a timeless classic for sure. It still rocks hard even today!

Should we say Van Halen’s magnum opus? It’s their most successful single and basically what propelled most people to jump into the VH bandwagon. It was different from their earlier material since this one’s driven by a rolling synth line.

“‘Jump’ is a song that we wrote for several different reasons, primarily because it is leap year and secondly, because I was watching television one night and it was the 5 o’clock news, and there was a fellow standing on top of the Arco Towers in Los Angeles and he was about to check out early, he was going to do the 33-story drop — and there was a whole crowd of people in the parking lot downstairs yelling ‘Don’t jump, don’t jump’ and I thought to myself, ‘Jump.’ So, I wrote it down and ultimately it made in onto the record, although in a much more positive vein. It’s easy to translate it the way you hear it on the record as a ‘go for it’ attitude, positive sort of affair — an I-jog-therefore-I-am approach.” – David Lee Roth

Whatever the meaning or origin is, it’s definitely an anthem of the 80s.

It was a massive success and the one song that basically catapulted them into rock superstardom. There’s a pretty interesting story here. Joe Elliott was once quoted saying that the track is about “something you can’t ever get your hands on.” And aside from featuring a Marilyn Monroe look-a-like in the music video, they also dedicated some of their performances to the iconic actress.

However, Joe set the record straight when he said:

“I don’t want to break anybody’s heart here, but Marilyn Monroe was just another average actress to me. The song was about somebody that’s out of the picture. ‘All I’ve got is a photograph, but it’s not enough.’” – Joe Elliott to VH1

Not that it actually mattered. It received heavy radio airplay and has been a crowd favorite during their concerts and live shows. From the vocal performance to the guitar riff, this song just refuses to be forgotten.

Love ‘em or hate ‘em (maybe just Axl Rose for the most part) but the fact remains that they helped shaped the hard rock sound in the 80s. They’re probably getting more credit than they actually deserve but with a massive following and after rolling out one hit after another, Guns ‘n Roses should definitely be on this list.

“I was at my house and I had that riff happening and Axl came over and he got those lyrics together, and then the band sort of arranged it. We got an arrangement for the whole band, ’cause that’s how we work. Someone comes in with an idea and someone else has input and in that way everyone’s happy. That came together really quickly too, that was arranged in one day.” – Slash

This is how rock ‘n roll is supposed to be – pure, raw, authentic and untouchable. Besides, it’s Axl Rose in his prime. What more can you ask for?

If by any chance, you need a solid proof why Megadeth deserves a spot on this list, just watch this live performance and see for yourself. Playing insane riffs without missing a beat and basically performing flawlessly in front of a massive audience? Don’t even get us started on the killer bass line! “Incredible” doesn’t even cut it. Yep, they pulled it off pretty nicely.

“Even in the studio, half-baked, Megadeth was capable of extraordinary musicianship. The twin guitar attack on ‘The Conjuring,’ the guitar harmony line in ‘Peace Sells’ — these were achieved not only through careful composition, but through camaraderie that comes when a band is really clicking.” – Dave Mustaine

There may have been lineup changes over the years, but this one is definitely the best. The whole album was a tour de force – you couldn’t shrug them off even if you wanted to. It’s a real standout and an absolute masterpiece.

In the UK, this was the band’s first top 10 hit. It talks about the European settlers and their arrival to the New World and also their conflict with the Native American tribes. The lyrics reflect the perspective from both sides. What made it controversial was the single’s cover artwork which was set in Hell and depicted a Native American wielding an axe while wrestling with a devil.

According to bassist and primary songwriter Steve Harris, “I wanted to try and get the feeling of galloping horses. But when you play this one, be careful not to let it run away with you.”

Bruce Dickinson’s vocal performance is almost otherworldly. He hits the high notes with so much power and energy, it’s mind-blowing. What a song! If it doesn’t give you goosebumps, you need to crank it up more. Seriously, we pity anyone who can’t appreciate this song even one bit.

Whether you’re a big fan of Ozzy Osbourne or not, you can’t deny that his voice sounds incredible in this particular performance. He’s probably high as a kite but dang, he killed this one. As a solo artist, this is one of Osbourne’s most popular tracks. It ranked at no. 9 on VH1’s “40 Greatest Metal Songs.”

“Randy had the basic riff, the signature riff. Then we worked on music together. He needed something to solo on so I came up with a chord pattern and the section for him to solo over.

Also, let’s not forget how legendary Randy Rhoads’ guitar work is in this song. The man had serious talent.

It’s difficult to pinpoint what exactly makes “Master of Puppets” remarkable. But in a nutshell, it became the epitome of hard rock in the 80s. It’s practically responsible for propelling thrash metal into the mainstream scene. It basically raised the bar for this genre and if anything, it only secured Metallica’s spot as one of metal’s greats.

“I just went to this party in S.F. and there was a bunch of sick freaks shooting up, and it made me sick. It’s not about any drug in general but people being controlled by drugs and not the other way around.” – James Hetfield on the song’s inspiration

It was adventurous and elaborate. The face-melting solo alone is enough to send chills down your spine. The opening guitar line is quite epic as well. All in all, it was the best metal had to offer in the 1980s. It didn’t just capture the spirit and vibe of the decade, it was also Metallica at their absolute finest.