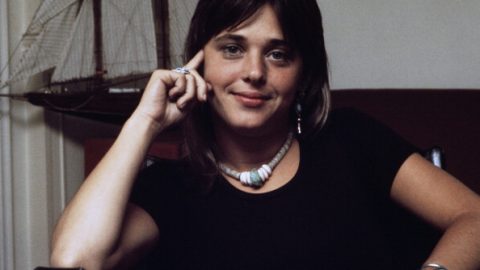 Detroit born Susan Kay Quatro started playing drums for her dad’s jazz band then joined two of her sister’s in the Pleasure Seekers as a singer and bassist. She started her solo career in 1971 when she moved to England. Quatro embraced the androgynous rock image as she grew into a new independent skin. Though she gained more success over seas than in her native U.S.A., she remains among the strongest women in rock.

While Suzi was finding her footing at the dawn of her solo career, many record companies where looking to fill the void that Janis Joplin left after her death. “According to the Elektra president, I could become the new Janis Joplin… I didn’t want to be the new anybody,” said Quatro about this period in her career.  She spent a good period reflecting and discovering her sound.

Currently, Quatro lives in Essex but she hails from Detroit, Michigan. Though Suzi Quatro found more success in UK, reaching #1 on the charts she’ll always an American girl at heart. “If you look at me, I’m very Detroit. Plain black leather and plenty of attitude,” Quatro says. Her American rock influences are evident in all aspects of her music- gritty and unapologetic.

The Queen of Noise

Suzi played instruments all her life. One fateful night in 1969 she was recognized by Mercury Records after a show she played with Cradle.  about meeting record producer and starting her solo career that night, Quatro says “Mickie took me to Motown Studios that night, along with Jeff Beck and Cozy Powell. I’ll always remember this. I picked up the bass, Jeff came in, Cozy came in, and we started to jam on Cissy Strut.” So a rock queen bassist was born.

Goddess of The Bass

The raspy voiced bad girl was a splendid musician. Listening to the beginning of “Your Mama Wont Like Me,” you can hear her opening riff get as funky as rock and roll can get until the song escalates into a rude rant about every reason you don’t want to take her home. But most epic is her bass solo while performing in Praha during a 1979 tour. The crowd loses their minds and all you can hear is whistles as Suzi keeps her eyes closed, listening to the sound of her

Yeah, she is GORGEOUS. Suzi Quatro is the kind of beautiful that’s only amplified by her real talent, professionalism in her trade, dedication, and sincere kindness. It’s hard to find any negative comments about Quatro because there isn’t a darn thing that is ill-willed about her. Quatro truly cared for her bandmates and never would attempt to upstage anyone for any amount of time. She was a rebel but in her core she was a class- act.

In the later part of the 1970’s Quatro, took a roll on Happy Days as bass playing younger sister to Fonzie’s girlfriend. The Happy Days producer offered her the roll without meeting her or having her audition, upon finding a photo of her on his daughter’s bedroom wall.  Suzi’s name on the show was Leather Tuscadero. Her performance was so legendary that a band was later named after her character.

Suzi had a very original style. She was not a show off in any sense of the word but boy did she look good in just about everything. Her rock and roll persona was based off her ability to play bass, to which Joan Jett has said, “I think the fact that I was able to hear people like Suzi Quatro having success playing rock’n’roll made me think, ‘Well, if she’s doing it, why can’t I?'” Reflecting now, you can see quite a bit of Suzi’s style mirrored in the Runaways, including Joan Jett.

Quatro had begun to play instruments with her Italian musician father in his jazz band at the age of 8- and never stopped playing music after that.Her talent was the main focus while her beauty was understated. It was simple, she was talented AND gorgeous. She was a rock and roll dream come true. Suzi Quatro didn’t appreciate the rock and roll persona either claiming that she wasn’t a sex, drugs, and rock and roll type of girl. What’s better than that?

But Have You Seen Her Lately?

Well look at her, she looks exactly the same. Everything about her is just so real and flawless. Suzi still continues to tour and lives in Essex, England. She is the bassist rock and roll deserves.