10 Essential Riffs You Need to Learn on The Guitar 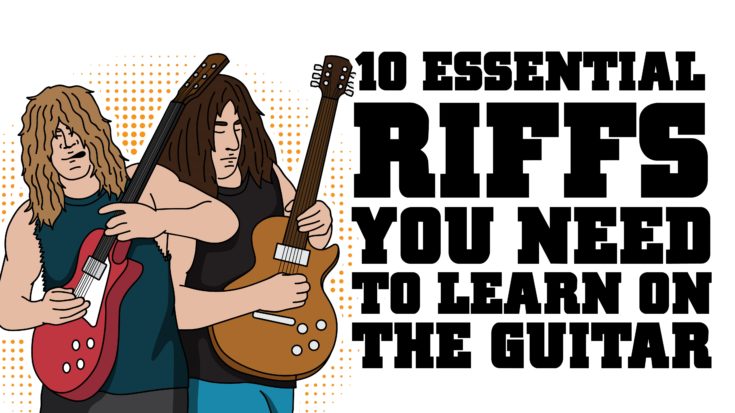 Admit it, watching these classic rock guitar greats just makes you want to be like them so badly. We know it can be a bit intimidating to learn the riffs especially when we talk about legendary songs but with practice, you might just be able to pull it off. Not everything on this list is easy but there’s one thing we can promise you – with enough patience and determination, it will be worth it.

Apart from the satisfaction of knowing how to play the riffs, there’s also the off-chance that should an occasion call for it, you can whip out your guitar and show off. Oh come on, you know you’ve always wanted to do that! But going back, add these to your “Need To Learn” list. Thank us later.

You won’t be joining the ranks of Jimi Hendrix, David Gilmour, Randy Rhoads and Jimmy Page anytime soon but at the end of the day, doesn’t it make you feel great knowing you can play these signature riffs anytime you like?

P.S. The songs are listed in NO particular order.

10. Creedence Clearwater Revival – “Have You Ever Seen The Rain?”

If you want to start off with something relatively easy, Creedence Clearwater Revival has got you covered. Even if you’re a newbie or already a pro at guitar playing, you’ll find their songs not only quick to learn but also incredibly fun. You probably won’t break a sweat with this one and besides, Marty here is an amazing teacher.

Taken off the 1970 album “Pendulum,” “Have You Ever Seen The Rain?” is a chart-topping hit written by John Fogerty.

“Well, as a song looking back Have You Ever Seen the Rain? is pretty good. But that was real; I was basically writing about the breakup of the band and using the natural phenomenon that we’ve all experienced when rain can be falling down on you coming down out of a blue sky.” – John Fogerty

All you have to do is learn these chords: C….G….Em….Am….F and voila, you’re all set to play this CCR classic any time you like. Nothing beats a good acoustic jam like this.

We can’t leave out this classic rock staple which also happens to be one of The Rolling Stones’ signature hits. You can channel Keith Richards while playing the iconic three-note guitar riff – we’re telling you, it’s surprisingly easy.

You don’t need to spend hours perfecting it. You’ll be just like Keef in no time! Okay, maybe that’s a bit of a stretch but at least you can groove to “Satisfaction” whenever you feel like it.

We don’t know if the riff really came to Keef in a dream but who cares, it’s a must-learn for every guitarist. Period.

This isn’t some heavy stuff so learning it should be fun – a good practice as you move on to more difficult songs to play.

“Lola” was a huge hit for The Kinks. We all know the story – a young man meets and gets attracted to a girl at a club only to find out she’s a transvestite. Ray Davies claimed it was a true story of a romantic encounter between the band’s manager Robert Wace and a transgender woman but rumor has it, it was actually inspired by a date between Davies himself and Candy Darling.

The Kinks came up with the iconic riff while the group was messing around with the open strings on guitars. The chords you need to learn are:
E…A…D
B7…F#7…A

“I remember going into a music store on Shaftesbury Avenue when we were about to make “Lola”. I said, “I want to get a really good guitar sound on this record, I want a Martin.”” – Ray Davies

We can’t get enough of that unique and distinctive guitar sound. So what are you waiting for? Pick up your guitar and play away!

This no longer falls under the easy category but take it as a challenge because “Layla” is an epic masterpiece by Eric Clapton. There are two versions – the first one is blues rock by Derek and the Dominos with some pretty incredible guitar riffs. The second is an acoustic version by Clapton which is spine-chilling and is still all sorts of awesome.

And if you’ve heard the isolated guitar track from Clapton and Duane Allman, it’s absolutely stellar.

“’Layla’ is a difficult one, because it’s a difficult song to perform live. You have to have a good complement of musicians to get all of the ingredients going.” – Eric Clapton

When the guitar god himself describes his signature song as “difficult,” you know he’s serious about it. But don’t let that stop you from learning the riff. Once you learn and master it, you’d be accepted in every single classic rock circle – that’s guaranteed.

You might need to catch a breath before the next one so from “Layla,” here’s something simple – The Doors’ signature song “Light My Fire.” They may have other awesome tracks but this is Jim Morrison at his absolute best. He wasn’t just a legendary frontman and vocalist but a prolific songwriter as well. And he always shined whenever he performed this.

Besides, this is what propelled them to stardom. It’s as if they became a household name overnight. Oh wait, they did.

“I was living with my parents in Pacific Palisades – I had my amp and SG. I asked Jim, what should I write about? He said, ‘Something universal, which won’t disappear two years from now. Something that people can interpret themselves.’ I said to myself I’d write about the four elements; earth, air, fire, water, I picked fire, as I loved the Stones song, ‘Play With Fire,’ and that’s how that came about.” – Guitarist Robby Krieger

Although much of the appeal of the song is due to Jim Morrison’s style and delivery, we can’t discount the fact that the riff is just as good. What are you waiting for? Start playing now!

Who said playing the guitar is easy? Just look at his fingers fly! If you’re a newbie, don’t worry if this looks next to impossible because it is. Lol, we’re just kidding. This is going to take more patience and plenty of practice. But on the plus side, learning it is fun – how many times have we used that word today?

Well the thing is, some people think studying these riffs can be boring and monotonous. On the contrary, it’s hours of nonstop pleasure from playing a Jimi Hendrix classic.

“Hendrix came in and kind of hummed us the riff and showed Noel the chords and the changes. I listened to it and we went, ‘OK, let’s do it.’ We got it on the third take as I recall.” – Drummer Mitch Mitchell

Hendrix was a perfectionist and this is the song that showcased his excellent guitar playing. There was something raw and unpolished about the way he played. If you tried to duplicate his sound and failed, don’t worry, you’re not the only one. The riff may be unbelievably simple but no one does it like Hendrix.

You cannot call yourself a guitarist if you don’t know the riffs to Chuck Berry’s epic track “Johnny B. Goode.” It’s widely regarded as the “first rock ‘n roll hit” and a must-learn if you want to take your guitar playing to the next level.

The song is special to Berry not just because it was a massive success but for the most part since it’s autobiographical and tells the story of his life although some minor details were changed.

“”Johnny B. Goode” is the Horatio Alger story of rock & roll, a message so basic that the song has become the inspiration for every kid who ever wanted to be in a rock & roll band or become a rock & roll star.” – AllMusic’s Cub Koda

There are numerous cover versions but of course, nothing beats the original. Once you learn the riffs, you can add your own twist to it!

The repetitive chord pattern is fairly easy to remember – Am…C…D…F…E7 and that’s it. This traditional folk song became the “first folk-rock hit” thanks to the success of The Animals’ version. It was a chart-topper both in the US and the UK.

Before that, they performed this while on tour with Chuck Berry and it became an instant crowd favorite so naturally, they recorded and bam! They got themselves a classic.

“’House of the Rising Sun’ is a song that I was just fated to. It was made for me and I was made for it. It was a great song for the Chuck Berry tour because it was a way of reaching the audience without copying Chuck Berry.” – Vocalist Eric Burdon

Also, thank heavens for this tutorial that’s newbie-friendly. We know it can get confusing for some but with the right teacher, it’s as simple as 1,2,3. You’ll be playing like a pro in no time.

This is all the tutorial you need to quickly learn the riffs to Deep Purple’s classic hit “Smoke on the Water.” It ranked fourth place in the “Greatest Guitar Riffs Ever” list by Total Guitar magazine. And we all have Ritchie Blackmore to thank. It was a shining moment for him especially when he got to show off his guitar chops with that now-famous riff.

It’s a simple riff but in true Ritchie Blackmore style, he created something magical out of it.

“The riff is done in fourths and fifths – a medieval modal scale. It makes it appear more dark and foreboding. Not like today’s pop music thirds.” – Ritchie Blackmore

Is that all there is to it? Maybe or maybe not. But if you’re going to learn some classic rock riffs, you can’t bump this one out. It’s a staple and every single guitarist has tried at least once to pull it off.

We were debating whether to just go all-in and pick Led Zeppelin’s “Stairway to Heaven” for our #1 but it’s just way too complex for most of us that we decided to “settle” with Pink Floyd’s “Wish You Were Here.” Both are classics but considering the degree of difficulty with the former, Pink Floyd can take one for the team because the riffs are repetitive.

The pattern is C…D…Am…G…D and it basically repeats throughout the entire five minutes and 41 seconds.

“It’s one of those strange songs that came to me very easily because David Gilmour had been playing the riff [goes on humming the intro riff], and I’d been listening to it, and going ‘what’s that?’ I said ‘play that again,’ so I learned it.” – Roger Waters

David Gilmour plays with an otherworldly feel to it. His guitar skills are incomparable. And of course, who doesn’t want to play like him? This should be at the top of every must-learn list.