10 Best Rock Documentaries You Need To Binge-Watch This Week 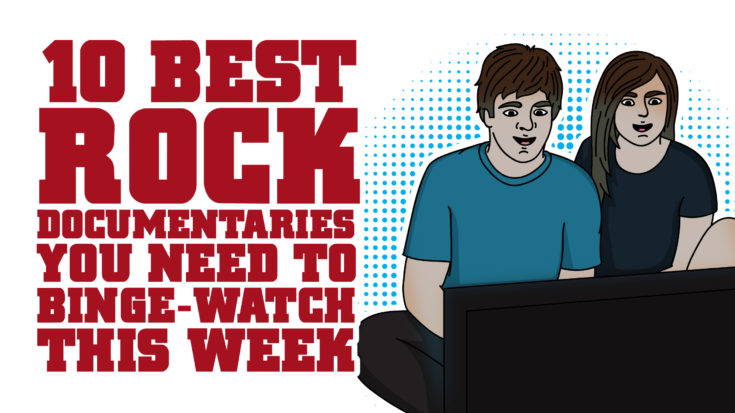 Not every rock documentary can boast of being stellar. It’s more than just story-telling (the musician’s rise to fame, hurdles along the way), there should also be a good balance about how their music has created an impact to fans and the world, in general. Plus, it should give us a good backstage sneak peek. We get to see one day in the lives of our favorite groups. All these and more make up an awesome rockumentary.

Here are our top 10 picks in no particular order:

If you want to take a peek at the rock ‘n roll scene back in the mid-‘60s, then look no further than this documentary film chronicling the then-23-year old Bob Dylan’s 1965 UK Tour. In 1998, the Library of Congress recognized it as “culturally, historically, or aesthetically significant” and therefore warranted preservation in the United States National Film Registry. With his handheld customized sync-sound 16mm camera, Pennebaker captured live performances, backstage scenes, after-parties, press conferences, crazed fans and even tempers flaring. When it was released two years later, it became a standard in the creation of rockumentary. It changed the game and unsurprisingly so, became a very influential movie. It was riveting to say the least and the world saw Bob Dylan’s raw talent. In this film, we saw Dylan transform from a simple guy trying to make a name in the folk scene to a real, full-fledged icon.

This 100-minute documentary film features snippets of The Who’s live performances (including the legendary one at Woodstock), interviews, television appearances like the band’s literally explosive US debut at “The Smothers Brothers Comedy Hour,” and some footages of the members smashing their equipments. If we can describe it in one word, it would be ‘exhilarating.’ It even followed a day in the life of Keith Moon – the legendary man behind the kit. The movie even featured his 31st birthday party and how the band members interact with their fans. “The Kids Are Alright” is intense and absolutely chaotic but in a good way – almost as if you are watching (right in front you) Pete Townshend destroy his Stratocaster and throwing the remnants to the audience. It’s an important rockumentary not just for fans of The Who but basically anyone who loves music and wants to see this insane British Invasion.

If you’re craving for some sort of drama, then this is probably the one you’re looking for. Aside from concert footages and studio rehearsals, one of the highlights of this film includes therapy sessions with Phil Towle. It also shows the no-holds-barred in-fighting and bitterness while working on their St. Anger album. The rockumentary featured Metallica’s struggle with alcohol abuse and the internal tension between Lars Ulrich and James Hetfield. In a nutshell, the movie follows them in their most challenging and turbulent years. It was brutally honest and incredibly raw, nothing like other rock documentaries before it.

When asked about it, Hetfield shared in one interview: “Hearing yourself, watching yourself, seeing the mirror back at what other people see. Especially where Joe and Bruce, the directors of this, they ended up being pretty much fly on the wall, so you really kind of forget the cameras are there and you’re being yourself. And a lot of times I’m not really comfortable with myself and seeing myself in the situations, but, man, I learned a lot about what I don’t like about me. Which was good — it was a good mirror. And I think everyone involved in that movie pretty much felt the same way about themselves.”

It follows The Ramones from their humble beginnings back in Forest Hills, Queens and basically, their explosive arrival to the rock ‘n roll scene. They were misfits who blazed through with the help of their punk-rock sound. Although they weren’t exactly known for achieving massive commercial success, they did influence the music of numerous bands. Their individual personalities clashed but instead of tearing up the group, it actually made everything work. This impressive documentary also features some of their early performances, candid interviews with the band members and of course, their induction into the Rock ‘n Roll Hall of Fame. The rough cut which premiered during the Slamdance Film Festival was shortened by almost an hour. Prior to the release in the US, the complete version was shown during the Berlin Film Festival in 2004. This rockumentary will make you fall in love with The Ramones if you haven’t yet.

This documentary chronicled the last few stops of The Rolling Stones’ US Tour in 1969. It’s a lot like watching a Greek tragedy with a hint of rock ‘n roll on the side. It features clips from their Madison Square Garden concert, photography sessions, recordings, and behind-the-scenes negotiations so they can put together an event to celebrate the end of their shows. As you may already know, it ended with the infamous Altamont Free Concert which was supposed to be a communal experience filled with music, peace and love. The fact that someone thought about hiring the services of a motorcycle gang (Hell’s Angels) in exchange for unlimited free beer, it already became a recipe for disaster. It was just a matter of time before everything went downhill – the free concert became chaotic and the result is the death of four people.

This movie features interviews and some old clips from The Clash’s collection in 1982. This is for anyone who wants to know the background and history of the band. The documentary also included the mounting tension and conflicts between Mick Jones and Joe Strummer. It even briefly touched the drug addiction of Topper Headon and his constant battle against it by going in and out of rehab. However, it didn’t cover anything after lead guitarist Jones left the band in 1983. It made no mention of the period when the group went on without him and even managed to finish their sixth and final album, “Cut The Trap” which was released in 1985 but unfortunately received generally negative reviews and was in fact, considered as their weakest record. It was the 2012 film “The Rise and Fall of The Clash” that extensively covered this particular era.

Aside from live electric performances from special guests (such as Bob Dylan, Neil Young, Ringo Starr, Van Morrison, Joni Mitchell, Muddy Waters, Neil Diamond and Eric Clapton to name a few) during the iconic “farewell concert appearance” of The Band on Thanksgiving Day in 1976, the film also features interviews with the members and studio recordings – basically The Band’s background, career and of course, their various musical influences. Scorcese also toured the group’s Shangri-La studio. In a nutshell, this epic documentary masterpiece captured a piece of rock music history. So it’s no surprise that this is widely considered as one of the greatest concert movies of all time. According to Robbie Robertson, “That’s what The Last Waltz is: sixteen years on the road. The numbers start to scare you. I mean, I couldn’t live with twenty years on the road. I don’t think I could even discuss it.”

This rock documentary chronicled The Fab Four’s hilarious first trip to the United States. It follows five days in the life of The Beatles. It’s an amazing piece of film because it captured John Lennon, Paul McCartney, George Harrison and Ringo in their natural, free-spirit state. It’s a fun film to watch – from the DJ enthusiastically shouting “Here’s what’s happening, baby! The Beatles!” to the screaming teenage girls everywhere, it was the clearest announcement of the arrival of the most popular band on earth. The US was about to experience Beatlemania. And of course, the rock ‘n roll scene was never the same way again. It’s a refreshing rockumentary especially since we get to see The Beatles’ funny antics – such as Ringo playing pranks by carrying the photographers’ cases and George donning on a porter’s uniform. It’s one movie even non-Beatles fans will love.

This rockumentary chronicles the events during the iconic Monterey Pop Festival held from June 16 to June 18, 1967 in California. Some of the legendary performers includes The Who, Jefferson Airplane, The Jimi Hendrix Experience, The Mamas and The Papas, Otis Redding, The Grateful Dead and Janis Joplin with her band The Big Brother and Holding Company. Estimated number of attendees is somewhere between 25,000 and 90,000. It was widely promoted and in fact, it somehow became the standard for music festivals. Therefore, it isn’t surprising that it influenced another historical event two years later, the Woodstock 1969.

Robert Christgau, a professional rock critic, wrote: “[T]he music and its… celebrants are like a wonderful secret — wonderful because even though everyone knows about it, it still delivers the thrill of discovery. Unveiled in 1968, Pennebaker’s vision of the 1967 event was instrumental in convincing potential organizers and participants that music was the healthiest way to crystallize the energy of a counterculture that by then seemed both blessedly inevitable and dangerously embattled.”

This film documents what is perhaps the most iconic music festival of all time, Woodstock, which was held from August 15 to 17, 1969. It attracted more than 400,000 people in attendance and featured some of the most legendary acts in music like Jimi Hendrix, The Who, Ritchie Havens, Joan Baez, Canned Heat, Grateful Dead, Creedence Clearwater Revival, Jefferson Airplane, Crosby, Stills, Nash & Young, and The Band. However, there are rock acts which failed to make it to the documentary. Nevertheless, it was an event to remember and the concert movie just became a benchmark for all that followed it. It raised the bar on how rockumentary should be done. It even became a recipient of the Academy Award for Documentary Feature. It was insane and chaotic. But since most of the performers solidified their legendary status with their performances, this movie is a must-watch for every classic rock fan.