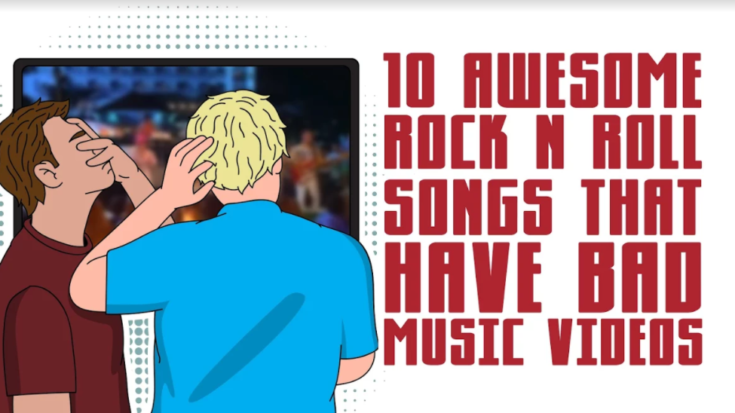 Music videos, when done right, can have massive contribution to the success of a song or an album. Several artists in the ’80s managed to break into mainstream because of heavy airplay from MTV. Not only did it help boost sales but also turned the rockstars into household names.

But on the other side of the coin, there are those which did more harm than good. The song, all by itself, is either good or at the very least tolerable but the music video is just the worst there is. Some baffled us, others made us cringe and there were those which had WTF written all over them.

Here are the top 10 music videos which you may or may not want to watch (and that’s okay).

P.S. We still wish we can un-see some of them.

If you need a good laugh, you HAVE to watch this one. It’s the perfect example of a music video which totally failed to match the awesomeness of the song. The first five seconds where the band plays imaginary musical instruments is just priceless and definitely one for the books. It’s so hard to take the song seriously when you’re watching this.

It will never be not funny.

“It doesn’t matter where we put this song because it has always had a strong effect on the audience, all the way back to the first time we played it—before it was even recorded. It was written on tour and we threw it in the set to see how it would go down. The audience had an amazing reaction to it without even knowing what it was.” – Neal Schon

To be fair to the band, this is their first concept video so we can cut them some slack. Still though, not even Steve Perry’s hotness can save it. The longer you watch, the weirder it gets.

So maybe this isn’t exactly an awesome song but it’s not really that bad all things considered. The music video, however, is a different story altogether.

First things first, just because it’s called “Tears are Falling” doesn’t necessarily mean you have to literally show someone with falling tears at the beginning. It’s way too cheesy for our taste. Second and perhaps one of the most important points we’d like to make: why the heck are they dressed like that? Paul Stanley looks prettier and more fabulous than the girl!

“By 1985, Kiss were a shadow of their former selves. Gone was the raw rock of their not so distant past, as well as their memorable “heavy Beatles” songwriting.” – AllMusic’s Greg Prato

It’s a catchy tune and pretty fun to listen to. But the music video is unbearable. It’s safe to say if you want to torture anyone, make them watch this on repeat.

“Velouria” is one of Pixies’ best songs. And so we don’t know why they had to subject us to this – a total waste of our precious four minutes. You could easily tell they were so uncomfortable in front of the camera. Actually, inasmuch as we want to write more about the video, there’s not much to say about it honestly.

What you will see is the band running in slow motion – slow enough to accommodate the entirety of the song. Yes, that’s it.

“You know the guy who does Snub TV? Pinko? He just came up to us in Manchester, where we were rehearsing and there was a quarry there. We had to think of something because everybody was giving us all this s–t because we didn’t have a video to go with the single. I was like, ‘Oh, sorry. We didn’t get it organized.’ For the push you have to have music and you have to have a video now. So we just gave them something. But we thought it was good… the slow motion thing.” – Kim Deal

It’s no surprise why MTV didn’t put it in heavy rotation. Because let’s be honest, who wants to watch that?

We wish we could un-see Alice Cooper’s close-up where he stares at the camera but feels like he’s watching you creepily. Oh god, we’re bound to have nightmares after this. It’s going to be his face each time we close our eyes.

It was his first top 40 single in two years and we would have been fine if he didn’t release this horrible music video. We know he’s weird but there’s just nothing to see here.

“One of its best songs was “Clones (We’re All),” a stylish tune that took Alice Cooper from shock rock to future shock… The result was a perfect combination of guitar rock power and sleek electronics.” – AllMusic’s Donald A. Guarisco

The song is interesting and awesome considering it’s the end result of Alice Cooper’s makeover. But the MV just doesn’t work. We know it’s supposed to be futuristic and all but hey, this is clearly not the best idea.

We have so much love for this song. The music video, however, not so much. Maybe if they showed a montage of concert scenes, that would’ve worked better. They’re basically just showing you what the lyrics mean as if you can’t interpret or visualize it yourself.

Drumming on cherry pies, that cherry pie falling on her lap and the girl getting hit with water from the fire hose (we get it, you want to extinguish the fire because she’s THAT hot) – eh, it’s tasteless and cheesy.

“A blessing and a curse, that song. I had fun writing it, all 20 minutes. And I had fun singing it. Unfortunately, the song rubbed some people the wrong way. And, of course, the whole title got out of control. It became the album title, the first video… Cherry Pie this, Cherry Pie that. I had fun recording the tune, but it’s probably the last of its type in our repertoire.” – Jani Lane

We get it. It’s about sex, no need to rub it in our faces. Geez.

You remember those times when guitarists step up, sing the vocals and you’re blown away? This isn’t one of those. The song is catchy and makes us want to snap our fingers or tap our feet. But the music video – where do we even begin?

The star of the show obviously is The Edge. From getting licked in the face by two girls to Bono and the other members tying a rope around his head – it makes you say WTF is going on?

“The lyric came very quickly and tapped into many of the ideas behind Zoo TV, the sense that we were being bombarded by so much information that you find yourself shutting down and unable to respond.” – The Edge

It’s bizarre on so many levels and practically unwatchable. We’re still wishing we could take back the last four minutes of our life. No wonder it always lands a spot in every ‘worst music videos’ list.

Hold on, did anyone else feel dizzy watching this? The song’s tolerable at best but the music video is pure torture. Close ups are fine but we don’t need to see his tonsils or nostril. On paper, it must have sounded like a good idea but looking at it now, we can’t help but think they shot this in a tiny closet. Wait, did they?

Interestingly, it was featured in both the book and movie adaptation of American Psycho where Patrick Bateman said:

“In ’87, Huey released this … Fore!, their most accomplished album. I think their undisputed masterpiece is ‘Hip to Be Square,’ a song so catchy, most people probably don’t listen to the lyrics. But they should, because it’s not just about the pleasures of conformity, and the importance of trends, it’s also a personal statement about the band itself.”

Well you know, he says that just before he killed Paul Allen with an axe. So anyway, we’d rather watch Christian Bale’s iconic movie than endure another minute of this trash.

It’s called “Roll the Bones” so obviously there will be some skeletons here and there. But man, we weren’t prepared for that CGI skeleton rapping – yes, you read that right, RAPPING. Apparently, he’s so cool, he puts on some old school sunglasses and even has a Mohawk.

It’s not Rush’s finest musical moment but we can think of worse rock songs than this. Still, that music video had us cringing so hard.

“The song ‘Roll the Bones’ is full of any number of little decisions that I had to make about what I thought, and how best to express them and how to introduce the idea that yes we do have free will and yes we do have choices, and yes our choices do affect the way our fates turn out.” – Neil Peart

It’s a musical experiment which isn’t their best decision but it is what it is. The MV, on the other hand, we’d be grateful if someone totally erased that from our memory.

We can see your face palm all the way from here. When did “Kokomo” fall under the ‘awesome’ category? Who the heck makes these lists? Okay, while it’s not exactly their best song, it still received a nomination for Golden Globes’ “Best Original Song – Motion Picture.” Besides, not everyone hates it – even critics gave it mixed reviews. Do we find it annoying? A little bit. But is it a hit? Yep, it topped the charts in the US.

But for the music video, that’s an entirely different story.

The MV confirmed what everyone had been thinking – their glory days were long over. Not even Tom Cruise mixing drinks could save it.

1. Mick Jagger and David Bowie – “Dancing in the Street”

Two legends, one epic music video fail – we love both David Bowie and Mick Jagger but they obviously shouldn’t have starred in an MV together. The song, which is awesome by the way, receives a lot of hate it doesn’t deserve because the MV is cringe-worthy.

The only reason we can forgive them for this folly is because it was done for a good cause which is the Live Aid famine relief.

“We banged it out in just two takes. It was an interesting exercise in how you can do something without worrying too much.” – Mick Jagger

We like the song but this is perhaps the ultimate example of how music videos affect the reception. If you judge it by the track alone, many would undoubtedly enjoy it. But putting it together with the MV, all you can see are two rockstars with big egos who didn’t hide the fact that they were trying to upstage each other.