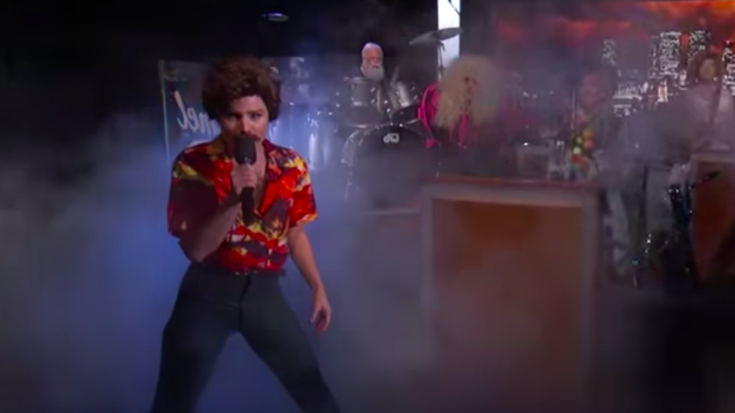 Do you want to build a sandman?

Dave Grohl and Disney’s ‘Frozen’ actress Kristen Bell who played Anna in the animated sensation, performed an unexpected mash-up of two historical hits. Grohl and Bell were in for a guest stint on Jimmy Kimmel Live and they dressed up as David Letterman and Magnum PI respectively as part of a Halloween special on the show. Grohl was standing in for Kimmel himself as guest host, in costume as another iconic TV host, David Letterman.

Bell was also in full costume of a Magnum PI complete with a fake mustache and some fake chest hair when she belted out her famous Disney song “Do You Want to Build a Snowman?” as requested by Grohl to be dedicated to his three young daughters, Violet, Harper, and Fifi. Midway through Kristen’s live performance, Grohl naturally took over the drums and they transitioned into a rocked-up version of the Disney song while mashing it up with Metallica’s classic hit Enter Sandman.