Why ‘Thick As A Brick’ Became A Success For Jethro Tull 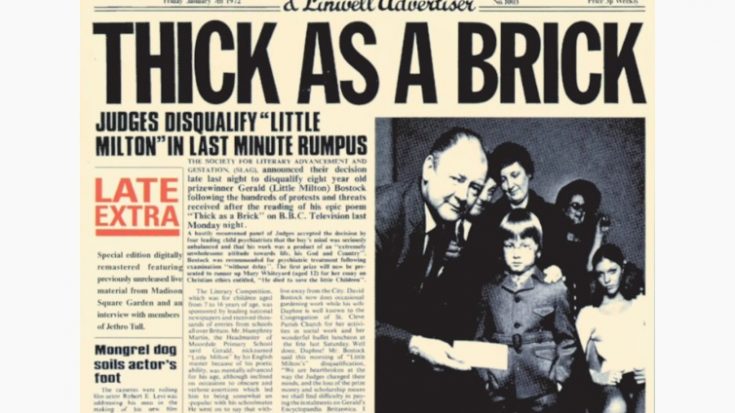 Jethro Tull soared as a game-changer in the music scene when they released their 5th studio album entitled Thick as a Brick. The “mother of all concept albums” as what frontman Ian Anderson suggested, was born from the critical reception of the band’s previous Aqualung, calling it a “concept album”.

The notion wasn’t true of course, since Aqualung was a collection of songs. Nevertheless, it drove him to create a fictional 8-year-old character by the name of Gerald “Little Milton” Bostock, who is a literary genius. The epic poem that the band was “inspired” from, were all mentioned on the packaging of Jethro Tull’s cover art for the album in the shape of a newspaper.

It was a product born from the efforts of all the band members and was also considered as the first all-progressive rock album from Jethro Tull, albeit the album was an instrument to mock the trendsetting lavish use of the genre in the 70s. The exertions were heavily inspired by the Monty Python comedy, and the wit was exhibited in the lyrics of the songs.

“The album was a spoof to the albums of Yes and Emerson, Lake & Palmer, much like what the movie Airplane! had been to Airport,” Anderson mentioned in an interview from The Arizona Republic back in 2013. The altering humor that circulates the album felt true that even fans have a hard time identifying if Gerald Bostock was even real or not.

The initial release of the album generated mixed reviews from critics, panning doubts about the album’s success. But the following months helped them boost popularity, ascending the top spot of Billboard 200— proving the critics wrong once again.