Why Angus Young Is More Recognized Than Malcolm Young 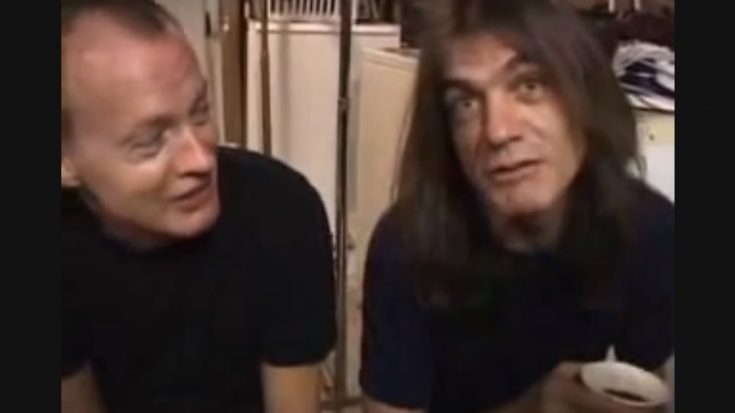 AC/DC's Angus and Malcolm Young in an interview - Matias / Youtube

While there is no solid evidence of sibling rivalry between the AC/DC brothers Angus and Malcolm Young, fans can’t help but speculate and wonder. While both play important roles in the band, it seems that people lean more to Angus when it comes to popularity due to his presence during performances. Being the lead guitarist helps a lot in the image, and with AC/DC being a hard rock outfit, it isn’t hard to see why Angus gets the spotlight. With the vocalist aside, Angus was a sight to behold. His signature school boy outfit with matching cap, the well-known SG he wields, his duck-strutting onstage, and the way he interacts with the crowd is just magical. He electrifies every performance with his antics, not to mention skillful guitar playing, it’s clear that Angus lives every moment onstage. Angus is one of the most authentic personifications of rock n’ roll in history, and that’s an understatement.

On the other hand, Malcolm Young was a more “reserved” rocker, supplying rhythm and backing vocal support for the band during performances. But this doesn’t take away the legitimacy of Malcolm’s musicianship in any way, as he was the primary songwriter of the band, and has penned hits like “Thunderstruck” and “Highway To Hell”, which have made their way to pop culture rather favorably. Malcolm was an underrated legend, with Angus describing his brother as, “Malcolm’s really underrated. He makes the band sound so full, and I couldn’t ask for a better rhythm player. Sometimes I look at Malcolm while he’s playing, and I’m completely awestruck by the sheer power of it. He’s doing something much more unique than what I do—with that raw, natural sound of his.”

Ever since Malcolm’s retirement, and eventual passing in 2017 due to complications brought on by dementia, he has been replaced by nephew Stevie Young to play rhythm for the band. Still, Malcolm’s synergy with Angus during their time together has been immortalized through their works, and continue to be regarded as one of the best guitar rock duos of all time.