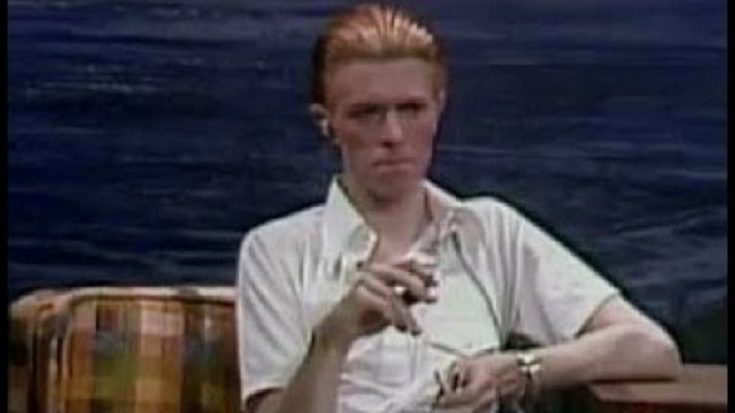 The 70s were designed for David Bowie’s meteoric rise of fame. After the birth of Ziggy Stardust at the start of 1972, David Bowie’s career took a turn for the better; he became the most famous musician in the world at the time and was able to capture the essence of what people all over the globe were yearning for through his art. Yet, apart from his music, his fans adored him for being honest and classy at all times – like the time when Bowie awkwardly sat on an interview in The Russell Harty Show back in 1975.

Harty’s show welcomed Bowie via satellite, as the musician was currently in Burbank, Los Angeles. The interview was painstakingly hard to watch, given the awkwardness surrounding the interview, and how many people seem to find Harty’s questions to Bowie quite rude. That is, Harty’s questions are thought-provoking, even going far as to question the legendary singer if he was coming back from England because he’s “short of money, or are you short of the ‘feeding off live audience.’”

The awkwardness didn’t stop there; Harty even began to ask Bowie if he thinks he’s a better musician after two years.

Harty asked: “For someone who claims not to be all that good a musician why are you coming back to perform on stage, or have you… are you a better musician in fact than you admit?”

Bowie retorted: “I can’t link those two parts. If I’m not that good a musician, why am I coming back?”

Bowie: “Well, coming back has got nothing to do with being a musician.”

Harty: “But do you think you’re a better musician after two years…?”

Bowie: “Well, I don’t play anything on stage. I’m a good performer, and I’m a good singer. That has nothing to do with being a musician, does it?”

Fans praised Bowie for being decent with the interviewer, despite the stupid questions. You can actually watch the full interview below.