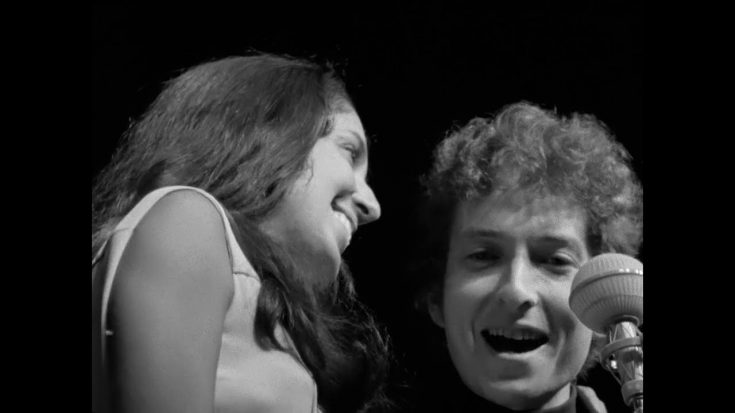 In the 60s, where most of the aspiring folk artists thrive in each of their own distinctness, some of them made headlines and became known as the voices of the generation. Bob Dylan and Joan Baez, two lovely singers who adventured on the depths of their musical careers, and discovered that there’s something more than their individual selves.

While Dylan conquered the world with his philosophical and experimental reveries in music, Baez, however, walked on a road with the lesser spotlight, and prefer to do things in a more traditional yet refined way. But both of them captured their listeners as being two of the finest vocalists during their time. It’s no surprise, then, that these artists have shared each other’s paths. Aside from the brief romantic relationship, both of them became inspirations for one another.

During a Bob Dylan interview for the Joan Baez: How Sweet the Sound (2009) documentary, Dylan mentions how he used to listen to the singer’s Joan Baez album, and gave her a lot of compliments for that one. Baez, also,  had created songs specifically intended for Dylan, as well as uses a lot of Dylan’s techniques when formulating a song; a piece of clear evidence of how these two shared something more than kinship.

The perfect example for their unwavering partnership is their 1964 rendition of Dylan’s “It Ain’t Me Babe,” from his Another Side of Bob Dylan LP. There’s a lot of love inside the performance, proving how much these two artists admire each other. The melodious blending that they created is powerful but not overbearing to hear, as Dylan’s acoustics harmonized the beauty of the song.