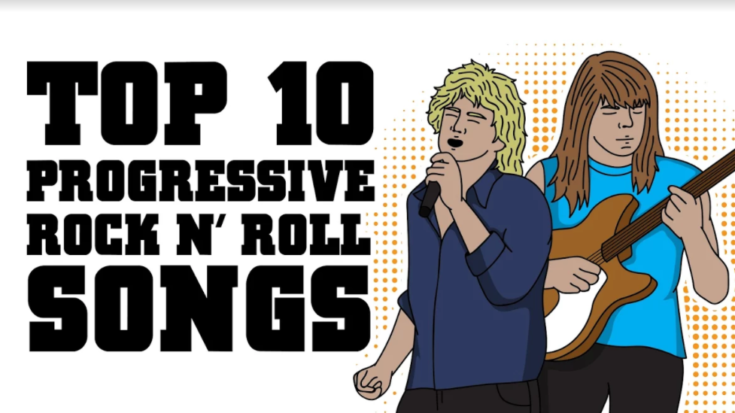 By definition, progressive rock is basically just rock music with classical influences – think Mozart and Beethoven. This subgenre has a lot to offer – sometimes, all in one song. You see, any prog rock band is guaranteed to have at least one song in that catalog that exceeds the 10-minute mark. Lengthy compositions are fairly common here.

From complex arrangements to bizarre lyrics (which may or may not make any sense), prog rock is many things but it’s never boring. Now, we’re about to take you on a rollercoaster ride – this is one musical journey you just can’t miss.

King Crimson is not everyone’s cup of tea, for some, they’re even acquired taste. But if there’s one thing we know, it’s that it takes something special to truly appreciate their music. Like it or not, they’re the real deal.

The thing is, you may not fully understand their song and yet, it gets to you on an almost spiritual level. Few can match that kind of effect. And this song specifically showcased the band’s inventiveness.

“We took the front seat on it, and pushed for that very up-front … in-your-face guitar [sound[. Yeah, definitely. We did that. You can hear it from the first track. This band is not f—ing about.” – King Crimson’s John Wetton

It runs for a little over 12 minutes and if King Crimson had one definitive track, this would be it. We also can’t help but marvel at its depth and simplicity. It’s an epic tune and we don’t know how anyone could resist it. We got hooked just a few seconds into the song!

This is one of the best things prog rock has to offer. It’s an absolute masterpiece and if Emerson, Lake and Palmer only released this and nothing else, they’d still be legends. Yep, that’s how good this is. Besides, it’s more than 20 minutes long and people still rave about it in 2017 so for sure, they must’ve done something right.

And our favorite part would have to be the fact that it showcased Keith Emerson’s incredible skills.

“Our sort of creativity comes in varying periods. We get long periods when there isn’t any creativity, we go into a studio and nothing sounds right, you know. Tarkus was written in six days because there was an awful lot of inspiration and one idea triggered another idea, and it was a long series of ideas being triggered off of what we had already done.” – Keith Emerson

It captivates anyone who listens to it and it’s just way too complex for us mere mortals. If you don’t believe us, you can try playing it yourself and you’ll understand why the supergroup deserved massive credits for this.

Everything about this is epic. And this is what prog rock music is all about. Dream Theater’s not messing around here and we can only hope other bands aim to be as good as this. From the harmony to the riffs and guitar solos, there’s no way you can listen to it just once.

It’s as if every time it plays, you find something new and exciting – not an easy feat to accomplish, to be honest.

“The story ends where it began, that’s in Octavarium, yeah, I mean, it’s not related to Scenes from a Memory at all, it’s just a coincidence I guess. The way that it’s related to Octavarium is that.. It’s kind of like a circle, we felt like that at that point, on the very last song, it was all back to the beginning.” – John Petrucci

It’s 24 minutes of pure musical bliss. And as if that’s not enough, they also paid tribute to other legendary prog rock groups like Pink Floyd because you know, why not?

If anyone wants to know what prog rock is, make them listen to this song. Our only issue with it is that it isn’t long enough – yes, even at a total of 43 minutes – it’s divided into two parts which goes for over 20 minutes each. We wouldn’t mind even if this went on for more than an hour. It’s good stuff like this that never gets boring no matter how many times you hit the replay button.

The complexity is mind-boggling – who would have thought this is one grand prank only Jethro Tull can pull off?

“Monty Python lampooned the British way of life. Yet did it in such a way that made us all laugh while celebrating it. To me, that’s what we as a band did on Thick As A Brick. We were spoofing the idea of the concept album, but in a fun way that didn’t totally mock it.” – Ian Anderson

It’s a brilliant piece, or pieces. There are two things that could happen the moment you start listening to the music – you get goosebumps or some major chills down your spine. Either way, your life is changed.

If you’re a musical genius like Mark Knopfler, you get inspiration from everything. Telegraph Road is a highway that runs from Colorado to Michigan. While traveling on a tour bus, he was also reading a book which was awarded Nobel Prize in Literature. That’s basically how it all began.

Somehow, you wouldn’t think he’d put two seemingly unrelated things and create a prog rock masterpiece out of it.

“in fact was driving down that road and I was reading a book at the time called Growth of the Soil [by the Norwegian author Knut Hamsun], and I just put the two together. I was driving down this Telegraph Road… and it just went on and on and on forever, it’s like what they call linear development. And I just started to think, I wondered how that road must have been when it started, what it must have first been. And then really that’s how it all came about yeah, I just put that book together and the place where I was, I was actually sitting in the front of the tour bus at the time.” – Mark Knopfler

The poetic lyrics and the mind-blowing guitar solo – it has all the ingredients for the ultimate prog rock song. It’s bone-chilling and there’s just not enough words to describe how amazing it sounds and how it makes you feel. You just have to listen to understand the magic.

In a nutshell, YES broke every single rule that ever applied to prog rock. They weren’t playing around. Well they did manage to pick up things from a junkyard (like clutch plates, pieces of metal and springs) and turn them into musical instruments so you see, they didn’t take themselves too seriously even while in the process of creating this majestic track.

“The record company didn’t know what to do with it, but we did, because we were performing it on stage and that was our legacy, to be able to go on stage and perform this music that would never be heard on radio.” – Jon Anderson

It’s the perfect track to open their 1974 album “Relayer” but honestly, we can just listen to this and put it on loop. We don’t like the shortened version just because we feel like if this was extended to a few minutes more, that’s a huge bonus for the listeners.

Sometimes, you can’t help but wonder why they’re not as famous as they should be. They make great music and are consistent in their sound. What more could anyone ask for, really? Still however, they didn’t manage to break into mainstream.

If “Arriving Somewhere but Not Here” didn’t send chills down your spine, then you’re listening to it wrong. Don’t you just feel sad for those who haven’t heard this yet? They’re missing out big time!

We picked this song over the other impressive tracks in their catalog because it’s epic on so many levels.

“I would describe it as a surrealist ghost story. It was about this idea of arriving at a point in your life that you never attended to arrive at, and I suppose having some perspective about that.” – Steven Wilson

When someone asks who Porcupine Tree is and what their music is about, all you have to do is make them listen to this because it basically sums up the band’s greatness.

For the record, this isn’t a song. It’s a musical journey all by itself. It’s captivating and astonishing. The diversity is mind-boggling too. Only geniuses can come up with something like this. It’s practically untouchable and every single member of the band gave top performance – it’s flawless no matter how you look at it.

It makes you feel things from beginning to end. It wasn’t a huge hit but it will always be remembered as one of the greatest prog rock pieces of all time.

“The inspiration behind it was … It’s difficult always to trace those lines because so many things tend to coalesce, and in fact it ended up being quite similar to a book called Anthem by the writer Ayn Rand. But I didn’t realize that while I was working on it, and then eventually as the story came together, the parallels became obvious to me and I thought, ‘Oh gee, I don’t want to be a plagiarist here.’ So I did give credit to her writings in the liner notes.” – Neil Peart

It’s an outstanding work of art and you can tell by their loyal following that Rush did something right with this one. Still, we think they missed the opportunity to clock it in at 21 minutes and 12 seconds.

This is gold. It’s a stunning piece of music. The depth and diversity are enough to take you to places without ever leaving your couch. And the live performance in Pompeii? We don’t even know how to describe it. There’s an otherworldly feel that the studio version cannot capture.

It’s simple yet complex. Then again, it’s Pink Floyd and they never shied away from anything complicated or technically difficult.

“The potential that human beings have for recognizing each other’s humanity and responding to it, with empathy rather than antipathy.” – Roger Waters talking about the song

Oh and if you noticed there’s something similar to this and the Phantom of the Opera, you’re not alone. Waters claimed that the riff from “Echoes” was plagiarized by Andrew Lloyd Webber but he decided not to file any lawsuit.

All in all, “Echoes” is a majestic tune that remains unrivaled up to this day. No one ever comes close to Pink Floyd.

The best part of this song is everything. From beginning to end, it’s utterly spellbinding. Even after four decades, it still has enough power to hit you right in the feels. It never gets old and the whole 23 minutes is nothing but pure musical ecstasy.

It’s like a banquet you can’t wait to feast on. If the world is ending, this is what we’d listen to.

“a personal journey which ends up walking through scenes from Revelation in the Bible….I’ll leave it at that..” – Peter Gabriel on what “Supper’s Ready” is about

This song has no peers and something like this comes only once in probably a hundred years. So aren’t we glad we lived in the same era as the geniuses who came up with “Supper’s Ready?” It’s too good for this world, to be honest. It gave “prog rock” a whole new meaning and it remains undisputed and peerless.