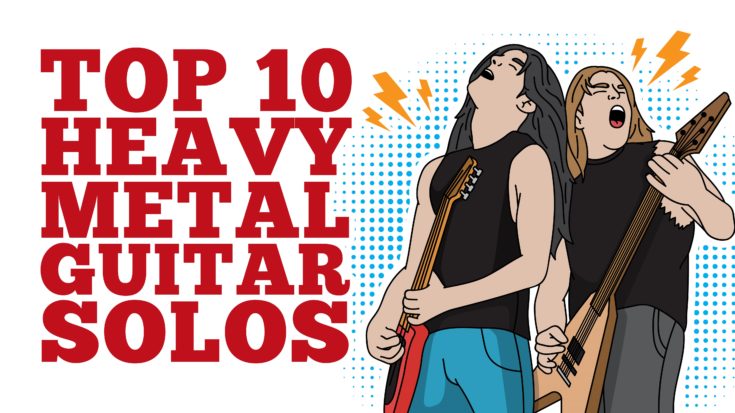 A Serious Case Of Eargasm

This is how you listen to heavy metal songs. First, you enjoy the music. Second, you build the excitement and wait for the solo. Three, you go all-out and air-guitar the whole thing. Total heavy metal experience right in your home.

Axe skill level: GOD. For the record, I had to put it on repeat around five times before I could fully accept I can never be half as good as him. At some point, I wanted him to stop playing because it made me want to stop practicing and give away my guitar to the first person who’s willing to adopt it. If there’s anything I’m sure of, it’s that Dave Murray is not from this world. Also known as ‘The Blonde Bomber’, it’s obvious he has vast knowledge of the fret board and whenever he plays the axe, there’s always fluidity and plenty of rhythm. Even when he’s tearing through the song, it’s always soulful and at times, you can even pick something bluesy when he’s doing slower solos. Oh and here’s a quick fact: did you know there’s a Facebook page solely dedicated to Dave Murray’s facial expressions when he’s shredding through those solos? Yep, you’re welcome.

All hail the great Synyster Gates. He always played intense, face-melting solos that makes you want to ask “How, syn? How did you do that?”. While I love the ‘Afterlife’, this is the part I look forward to the most and more often than not, I like to repeat the solo over and over again. Okay, I’m having goosebumps now. This is simply epic. During his interview with Ultimate Guitar, he was asked if he enlisted outside opinions on his guitar solos and Gates answered: “It’s definitely the best way to go. We do that with every facet of Avenged Sevenfold – everybody is with everything. I have the final say of what happens in a solo.” Let’s just say, he’s like a modern day guitar hero. And in the rock and heavy metal scene, he’s someone you can never ignore. He manages to step up his game every single time.

3. Seasons in the Abyss by Slayer

Always a state of musical perfection. So how else would one of the best thrash metal bands ever step up their game? Have Kerry King and Jeff Hanneman duel for a mind-blowing solo. There are so many things going on in this little piece of musical gem and it only proves one thing: Slayer is on a different level. Not sure how else to put it but this is some serious masterpiece or rather, a thrasherpiece. Sorry, I just couldn’t let the chance pass up. I remember 26 years ago when this was released, metal was never the same again. When asked about the recording, King said: “I don’t remember anything really special about the recording session. We were all just excited to get these songs out there. It felt like the session went pretty smoothly.” Straight from the mouth of a guitar god. I swear this is their crowning achievement.

There’s so much power in this solo. Enough said. Yngwie Malmsteen has always been a monster on stage and his guitar skill is almost otherworldly. If you’ve been to any of his concerts, it will sometimes feel like he’s screaming the high notes. I can’t pinpoint it exactly — could be his tone or feel — but this is hands down, musicality at its finest. You know what they say about Yngwie, “often imitated but never duplicated.” Don’t get me wrong, I love all his other songs but I just find myself always going back to this one. It speaks to me on a spiritual level. And that killer solo? I can only wish it was way longer – that is it’s only fault. But dang, it’s so fluid, emotional, creative – an utter perfection. This will always remind me why I was hooked to Yngwie’s music. Decades later, I still am.

Dimebag Darrell will always be one of the best guitarists to ever walk this earth. His solos always scream musical brilliance and this is certainly no exception. Only Dime could make a guitar cry as beautifully as that — it’s undeniably his finest piece and will forever be a sound no one can replicate. I’m missing him so badly now. He was once asked about the incredible face-melting piece and Dimebag Darrell said: “That particular solo was thought-out in a more orchestrated fashion than some of the others I play where I just start ripping right off the bat. The thing that really makes the ‘Floods’ solo come across like it does is [bassist] Rex’s playing behind it. He’s using his fingers and he plays a whole bunch of cool licks and shit in there. He definitely adds to the vibe and feel of my lead because I’m playing off his part a lot — it was a great foundation for me to build on, man.”

Can we just take a moment to appreciate how much beating that guitar just had? I can’t even play this on air-guitar, to be honest. It’s so epic and bad ass I had to keep checking if K. K. Downing and Glenn Tipton are even real OR if they were metal gods simply sent to us mere mortals to teach us a thing or two about playing the axe. The only thing I didn’t like was it had to end. And by the way, anyone who’s trying to learn this can tell you it’s one of the hardest solos to play. The riffs are complex and exude raw power which makes me think this could be Tipton’s magnum opus. It’s nothing short of perfect and if you’re a non-believer, all you need to do is listen to this song and I guarantee they’ll win you over with one of metal’s greatest solos ever played.

7. Children of the Grave by Black Sabbath

This riff is all you need to hear today. Tony Iommi is a musical genius. His hand looks like it has a life of its own and we have nothing but respect for this legend. I figured it’s about time to stop trying to play like Tony and just do myself a favor and buy a xylophone. 🙂 But seriously, this is one for the books. The solo break is astonishingly good (not that we’d expect anything less from Iommi). It’s fast yet melodic all the same. A total class act – how can you not love this guy? It’s the perfect composition from a great riffmaster. That feeling and rhythm can only come from him. It sounds so awesome I can’t even tell which my favorite part is exactly. Just kidding, I love all of it. Tony is the man, the god, the real deal. Please teach us your ways, master!

In my honest opinion, this is Metallica’s masterpiece. You are not a real fan unless you’ve found yourself in an utter state of awe after listening to Kirk Hammett’s guitar solo. The impossibly fast, in-your-face solo is almost too much to handle. The complex tapping is insanely good and unforgettable on so many levels. It’s Kirk at his finest YET. If anyone asked me how Metallica raised their heavy metal game, I’d say this is the ‘one’. See what I did there? Anyway, this song contains some of the heaviest riffs the band’s ever produced. On September 2008, Kirk was interviewed by Kerrang! and revealed this is one of his favorite solos: “Specifically, this is the middle solo of the song. Much like ‘Enter Sandman’ it’s a solo that everybody can pretty much sing along to, and it definitely gives me a really good feeling every time I play it.” P.S. The tune will likely stay in your head for days.

Whether you’re a huge Ozzy Osbourne fan or not, you can’t deny the fact that Randy Rhoads did a brilliant job with this solo. He’s always had a domain over other metal guitarists and there’s no other way of saying this but his music has no rival. He knows his guitar like the back of his hand and he plays sick notes. You can hear the strings sing and scream under his fingers. What a god! He was a groundbreaking artist and his legacy was such that it created a new meaning for heavy metal. “Mr. Crowley” was the song that showcased his stellar guitar technique. Randy Rhoads also said, “I’d have to say that ‘Mr. Crowley’ is my most memorable solo. I had spent hours trying to figure out a solo for the song, but wasn’t getting anywhere. I finally put something down. Then Ozzy came in and said, ‘It’s crap—everything you’re playing is crap.’ He told me to get in there and just play how I felt. He made me really nervous, so I just played anything. When I came back to listen to it, he said it was great, and I had to agree.”

10. Tornado of Souls by Megadeth

Ah, yes. The Great Chris Broderick. There’s really not much to say here except that this solo showcases Chris’ talent and skills. It’s pure and raw and if it doesn’t send chills down your spine, you’re not listening right. This is not an easy thing to play and it’s even tougher trying to pull it off live and yet, Chris does it flawlessly and effortlessly. Best solo ever. One on interview with Guitar World, he was asked whether his solos would come to him spontaneously, he said: “No, I spend a lot of time on my leads, but there are times when I spend a lot of time on a lead because I want it to sound spontaneous and off the cuff. If you want it to sound more anxious you rush ahead of the beat a little bit. And if you want it to sound more lackadaisical and you want it to seem like you were just thinking about getting to that note and you barely got to it in time, you play a little bit behind the beat. So for me it’s a very musical process because it starts with what I imagine, but then when it comes time to execute, it becomes a very thoughtful process.”