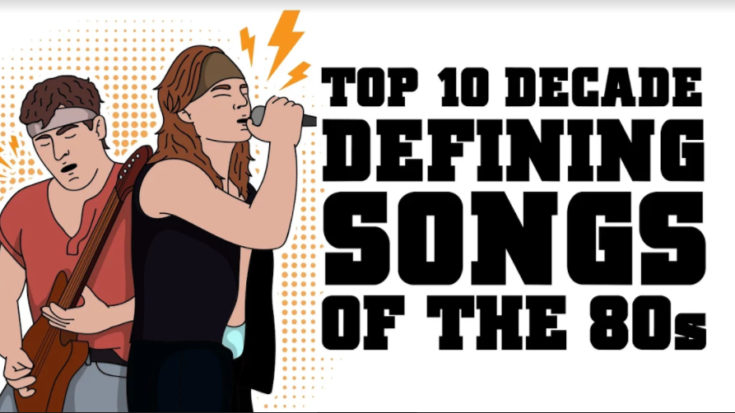 Tracks That Dominated Radio and MTV

The ’80s was an interesting time in music. The disco mania was beginning to dwindle away – people were now gravitating towards new wave and pop. And it was a glorious time for hard rock too. And let’s not forget MTV and its rise to prominence – it was a game-changer because everyone wanted their music videos to get a heavy amount of airplay.

In an era of Cabbage Patch Kids, Super Mario Bros., E.T., Gremlins, legwarmers and big hair, we picked out 10 songs which defined the ’80s. They’re not the greatest but they’re the ones that best represents the decade. If you’re looking for anything by Madonna, Cyndi Lauper or Cher, you won’t find them here. Although they had some decade-defining hits, we’ll just go for all things rock ‘n roll.

Let’s check it out.

This American classic hit is Bruce Springsteen’s protest song. The message is about the effects of the Vietnam War and how the veterans were treated when they are back home. They didn’t get a hero’s welcome and most of them were largely ignored despite their massive sacrifice.

You can understand where he’s coming from especially since some of his friends died in the war.

“When you think about all the young men and women that died in Vietnam, and how many died since they’ve been back – surviving the war and coming back and not surviving – you have to think that, at the time, the country took advantage of their selflessness. There was a moment when they were just really generous with their lives.” – Bruce Springsteen

It’s more than just a song – it’s an anthem. And Bruce Springsteen hit a gold mine with this track. There are songs that leave a lasting impression – this is one of them.

It’s one of those collaborations you can’t help but say, “Why didn’t they do this sooner?” and also makes you wonder why it’s just one song. They could have worked together for an entire album and that would’ve made all our flamboyant dreams come true.

Freddie Mercury and David Bowie both have big personalities which translated to stellar performance on stage every single time. At first, we thought they were going to outdo each other (like Mick Jagger and Bowie in their cringe-worthy music video) but hey, they didn’t and it’s not just good – it’s legendary.

“It was hard, because you had four very precocious boys and David, who was precocious enough for all of us. David took over the song lyrically. Looking back, it’s a great song but it should have been mixed differently. Freddie and David had a fierce battle over that. It’s a significant song because of David and its lyrical content.” – Brian May

Minus the same larger-than-life, otherworldly personas, they were similar in more ways than one. They were both fabulous and they know how to put on a show. There’s no way you can put this on and not be transported back to the ‘80s.

Steven Tyler has always been unpredictable but one thing we didn’t see coming was Aerosmith collaborating with hip hop group Run-DMC. We were shocked and skeptical – it’s the same reaction we had when we found out Paul McCartney’s been working with Kanye West. But unlike the latter, we were pleasantly surprised with the former.

Still, it’s a bit ironic that two of the members had no idea who Aerosmith was even if they released the original version 10 years before.

“I went through my whole album collection looking for a song that Run-D.M.C. could do that would point out the relationship between hip-hop and other kinds of music. ‘Walk This Way’ had a familiar rock sensibility to it, but at the same time, with very little change, would function as a hip-hop song.” – Producer Rick Rubin

The ‘70s was a golden time for Aerosmith but during the ‘80s, their records didn’t even make it to the charts. And since this remake of “Walk this Way” was a huge success, it gave both groups what they want – Run-DMC breaking into mainstream and Aerosmith getting back into the game.

Well, hello there hair metal era. For the record, we know Def Leppard’s got a string of amazing songs but nothing quite like “Pour Some Sugar on Me.” There’s a reason why it’s the band’s signature track and why it remains unmatched decades after it was first released.

It was something that’s hard to ignore because you can hear it everywhere and thanks to MTV for playing it on heavy rotation which contributed much to the song’s success.

“The song, a raw anthem dedicated purely to sex, boasts some of hard rock’s most unmistakable booming drum lines, courtesy of Rick Allen, who began to play an electronic kit after a car crash cost him his left arm.” – AllMusic’s Liana Jonas

It may have been written by accident but the song more than compensated for the costs and losses, it became a big win for the band. However, it wasn’t an immediate success because it was largely ignored at first. Listeners eventually came around.

This is one of the reasons why Guns ‘n Roses’ debut album was the bomb. “Welcome to the Jungle” basically summed up what the band had to offer and it worked, they gained massive following because of hits like this.
Only this explosive track is the perfect way to open “Appetite for Destruction.” Of course, it made GnR a phenomenon.

“If somebody had told me it was gonna be this huge record, I’d have laughed in their face.” – Slash

GnR at their prime was unstoppable. Say what you want about them but they made history and towards the late ‘80s, they left everyone else in the dust. It was so wild and intense, it was like a bucket of ice water poured over your head.

GnR was on the rise and they weren’t any other group you can just forget about. Besides, you know a band is something else when their songs remain timeless.

Hot on the heels of “You Give Love A Bad Name,” “Livin’ on a Prayer” was played on heavy rotation in MTV – because seriously, who doesn’t want to see Jon Bon Jovi’s smoking hot bod and gorgeous face on TV? The man was the stuff of every teenage girl’s dreams.

If you can remember back in the ‘80s, you can hear it on radio stations almost every 15 minutes. Then again, you can’t blame them. It was catchy and highly addicting to listen to.

“You know that thing is not very easy to play. Basically everything gets fed through a one-inch tube that goes in your mouth. Then you try to sing through it into a live mic. I tried it once. It will damn near take your face off. Your eyeballs are being dislodged from their sockets, man.” – Jon Bon Jovi

It’s that one song even haters learn to love. It may be overrated, overplayed and overexposed but it’s the track that transports you back to the ‘80s once it comes on.

“Master of Puppets” is the kind of tune that’s difficult not to try to air-guitar or air-drum to – heck, some even ‘sing along’ to the guitar solo. It rocks hard like that. Is it the best thrash metal track out there? We’d leave that for you to decide but fact is, it’s a definitive song of the ‘80s.

This was Metallica’s tour de force and they blew every other group out of the water which isn’t an easy task to accomplish. But they did it, spectacularly too.

“We had so much energy and belief. It’s interesting how instinctive things used to be, how impulsive. I don’t remember labouring over ideas or ways to do things. We just did it.” – Lars Ulrich

Metallica was propelled into international stardom and fans just can’t enough. And besides, you know you did something right when one of your classic hits made competitors step up their heavy metal game.

Joan Jett hit the jackpot with her cover version of The Arrows’ “I Love Rock ‘n Roll.” It was a huge hit for her especially when she recorded with The Blackhearts. It topped the charts for several weeks and received platinum certification status from the RIAA.

You don’t need to look far to know why this earned massive success – the tune is catchy and MTV, as with the other songs on this list, played a big part by putting the music video on heavy rotation.

“I did a very early version with them, it was great working with them, and no, there was no sense of trepidation on my part, despite the fact that everyone was telling me they were the most notorious band on the planet.” – Joan Jett on recording with The Sex Pistols’ Paul Cook and Steve Jones

This is Joan Jett’s happy ending especially because before she made it big with “I Love Rock ‘n Roll,” her career seemed to be going down the drain. The song had edge, it had attitude but it was also danceable.

This is how you welcome the decade – with a bang courtesy of Motörhead. “Ace of Spades” is heavy, hard-hitting, and unrelenting. If the band only had this one song and nothing else, they would still secure a spot in the rock ‘n roll pantheon. This tune sealed the deal for the boys.

It’s their signature track and a real crowd favorite even if Lemmy Kilmister believes there are better songs in their catalog. Still, it’s easily recognizable and not even the number of years since it was released dulled its fire.

“It’s a fantastic track. It’s got a natural speed, a velocity of its own, it’s got a great arrangement and it rocks like a bastard. And Lemmy’s lyrics are fantastic.” – Eddie Clarke

And this isn’t just for fans of rock music. It’s an anthem so it’s no surprise that you can hear this being played in video games and various TV shows.

Van Halen scored big with one of their most popular songs “Jump.” It’s a classic and an epic masterpiece at that. Besides, these are the guys who can have big, glamorous hair and tight-fitting suits and still look bad ass. How many can pull that off? It screams ‘80s whether you only listen to the music or watch the music video.

“the first thing I did up here was ‘Jump’ and they [Roth and Templeman] didn’t like it. I said ‘take it or leave it’, I was getting sick of their ideas of what was commercial..” – Eddie Van Halen

Sure, it wasn’t the best time for the band and there was a lot of drama surrounding them but hey, it’s not every day someone comes up with a majestic piece like this. And when you think about it, probably every other metal band wished they had “Jump” in their catalog. That says a lot if you ask us.