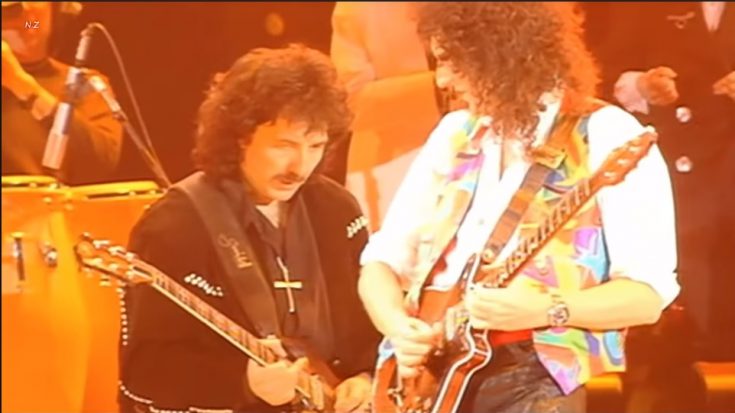 Heavy metal has been an integral part in the evolution of rock n’ roll into more diverse forms. Characterized by the generous use of distortion and high gain levels for guitars, heavy and driving bass progressions, and racing drum fills with gymnastics, is concluded by the powerful vocals of the lead singer. The genre picked up its pace in the 60’s and 70’s which then birthed other variations of metal in the decades to come. Of course, it wouldn’t be possible without talented axemen who pioneered the aggressive sound with their creativity and the heavy use of overdrive. Let us rediscover some of the most talented metal guitarists that helped foster and develop the legendary genre.

Although Queen was hardly a heavy metal band, their flexibility to transition into other branches of rock allowed them to adapt to different styles with ease. Brian May in particular, took a lot of inspiration from his contemporaries that were into heavy metal, and composed some of Queen’s heavy metal songs that are impressive considering that the band was more glam/prog and arena rock-oriented. Though many reference the thrash metal track “Stone Cold Crazy” as it is well-known, the more obscure “Ogre Battle” is a more fitting showcase of May’s metal skills.

Let’s face it, Ritchie Blackmore gave Deep Purple its signature energy with his reckless yet calculated performances. It’s interesting to know that Blackmore actually credits classical music as a big influence on his playing style. Though highly indistinguishable due to the high speed that Blackmore employs when playing, the arpeggios and his progressions are pretty much rooted from classical styles.

With early beginnings of the band taking a glam rock route, the band finally found its signature sound in 1990, with what is called groove metal, variation of thrash with a slower tempo. Dimebag Darrell, aka Darrell Lance Abbott, paved the way for the sub-genre to flourish, with his signature lumbering cadence of distortion filled chords, and crystal clear solos that make guitar wails a staple. Sadly, he was ended when an unstable fan shot him in 2004.

The Swedish guitar meister is best known for his work in the neoclassical metal sub-genre, where his pioneering placed him on the pedestal of the best metal guitarists. The intricacy of classical influence to Malmsteen’s playing became a fresh sound for the era, the technical precision he brings to the table has been rivaled by essentially nobody. His signature arpeggios and sweep picking technique is a breakthrough innovation for the evolution od the metal sound.

One of the most disciplined guitarists in the ranks, Steve Vai once started with almost fifteen-hour practice sessions after he fell in love with the guitar. In his time with Frank Zappa as , Vai encountered the most complicated musical work of his career, but also led to the development of his technicality and feel for composing music. While Vai doesn’t really thrive in heavy tracks, when he does, he delivers.

Though Dave Mustaine’s stint with Metallica was short, he gathered enough experience to start his own band Megadeth. Mustaine took on the role of vocals and lead guitars, though from time to time alternate with fellow guitarist Marty Friedman. Known for his spider rhythm technique and blistering solos, Mustaine is considered to be one of the pioneers of the genre.

One of the severely underrated metal guitarists (and band) is John Peter Petrucci of Dream Theater. They are known for long, necoclassical metal themes that are often paired with irregular time signatures. Petrucci is especially know for his high speed alternate picking technique on his seven-string guitar, but has also delved into more sustained and slow emotional solos.

The lead counterpart of James Hetfield, Metallica’s prize lead guitarist Kirk Hammett electrifies their performances with his crazy arsenal of skills. This includes, but are not limited to: palm muting, pinch harmonies, and tremolo picking. Hammett’s speed and precision paints a restless energy for Metallica’s sonic atmosphere.

Best known for his time with ex-Black Sabbath vocalist Ozzy Osbourne, and became the staple for his band. Rhoads was known for his passion for music, and even wanted time off the band to undertake a classical guitar course. He is known for non-pretentious and no-nonsense riffs, harmonies, and his neoclassical roots which made Osbourne’s solo career take off. Rhoads unfortunately died due to a tragic plane crash in 1982.

Probably best known as the grandfather of metal, Tony Iommi was an integral part of the Black Sabbath Sound. Although a victim of a freak accident in a metal factory which cut off the tips of Iommi’s middle and ring fingers on his right hand, this didn’t faze him and continued to become one of the most influential guitarists of heavy metal. His mastery of riff making paved the way for succeeding metal bands to improvise upon his iconic riffing legacy. Iommi is known for his deep and heavy sound, which was achieved by down-tuning his equipment by three half-steps.