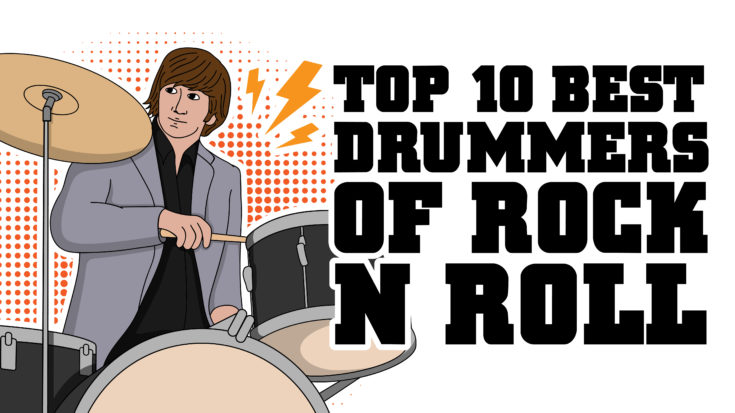 Say what you want but drummers are the backbone of every band. It’s easy for one song to fall apart once the man behind the kit misses a beat. Apart from having the best seat in the house, they have the most vital task in the group. You see, they can have the greatest guitarist, bassist or frontman but if the drummer doesn’t have that groove or “feel,” then it’s game over for everyone.

It’s about the timing, drive and vibe. But more importantly, they propel everything forward. The drum beats provide a sense of excitement no other instrument can. You know what people say, “A band’s only as good as its drummer.” And that’s pretty accurate considering it’s hard to cover up any mistakes made – both the audience and the other members can sense it and well, everything can go down the drain.

If you don’t believe us, just take a look at this list. What would Led Zeppelin be without Bonzo? Or Rush sans Neil Peart? Or The Who minus Keith Moon? It just won’t be the same.

We love his work with Genesis. And his powerhouse style always leaves us breathless. Also, he’s the kind of musician you have to see live. It’s hands-down incredible, watching him is almost like a religious experience. He’s not as flashy as others but he holds his own.

Oh and he’s versatile too – he can play practically anything. More than a sticksman, he’s also a singer and all-around rock god.

“I didn’t think about the drum fill, I just did it that particular take and that’s the one we used. We didn’t sit there thinking, ‘Oh boy, their mouths are going to be dropping when they hear this!’ It was nothing like that.” – Phil Collins on the drum sound of “In The Air Tonight”

From being parodied by a gorilla for a Cadbury commercial to Mike Tyson air-drumming to his solos, his playing is smooth but he has so much feel it translates to his audience. Not everyone appreciates his greatness but let’s put it this way, if drumming is like boxing, then he’s a heavyweight.

The sad thing about being Alex Van Halen is that he was Eddie always overshadowed him, Eddie was the superstar. And mind you, Alex is the anchor that held every classic hit together. You can’t think of “Jump” and not consider how it would sound without Alex’s drumming.

The man is technically proficient and what we love about his playing is that he can go fast or slow but either way, it always had that great feel and all the while, he NEVER misses a beat.

“[My father] was a musician, and it’s hard to put into words, but musicians are different than the 9-to-5ers. It’s a different mentality … the whole planet is your home.” – Alex Van Halen

Do you have any idea how dedicated he is? He once played with a broken hand and the injury was so bad he couldn’t hold a stick. What did this genius do? He tied it to his wrist using a shoelace because the show must go on.

Mitch Mitchell is just as good as every other drummer on this list, but sadly though, he’s not as recognized. We don’t know why he remains underappreciated – one only needs to look at his solos to be mesmerized.

Judging by his style and technique, you can tell how heavily influenced he was by Buddy Rich. And just like Alex Van Halen, the reason why he’s not as popular as Bonzo or Neil Peart is because he was constantly overshadowed by the guitarist – and it’s no less than THE JIMI HENDRIX.

“All of this stuff I did that I was rather proud of, I thought I came up with it. But no, I got it from Mitch.” – The Police’s Stewart Copeland on Mitch Mitchell

Legendary fills, great style and explosive drumming – he’s a real dynamite and just because he sits behind Jimi Hendrix doesn’t mean we have to ignore this creative genius.

Some people make jokes that Ringo Starr is overrated. Maybe the only downside to being a member of The Beatles is you have to compete with multi-instrumentalists and legendary songwriters. But if we were to look at Ringo’s drumming skills, it’s still way above average. Besides, if it’s good enough for John Lennon, Paul McCartney and George Harrison, then it’s good enough for us.

Are his fills and beats simple? Yes but every single one of them is perfect for the songs. It’s the glue that kept their classic hits together.

“Before Ringo, drum stars were measured by their soloing ability and virtuosity. Ringo’s popularity brought forth a new paradigm … we started to see the drummer as an equal participant in the compositional aspect … His parts are so signature to the songs that you can listen to a Ringo drum part without the rest of the music and still identify the song.” – Journey’s Steve Smith

Ringo was low-key and it’s easy to overlook him but think of how essential he was to The Beatles as a whole. This is what we meant when he said drummers become the backbone of every band. And we’d be lying if we say we don’t enjoy feet-tapping or finger-snapping to Ringo’s drum beats.

In the world of hard rock, Ian Paice stands out. Unfortunately though, you rarely see his name pop up in “Greatest Drummers” list. He deserves so much more than that. From his mind-blowing footwork to his jaw-dropping speed, there’s so much confidence in his drumming and let’s be honest, that is everything.

Sure, skills and techniques are important too but any sticksman who isn’t confident enough is sure to bring the rest of the band down. That never happened with Ian Paice slamming away behind the kit.

“He has a swing that feels just right. And his dynamics are great. The drummer in my trio, Van Romaine, calls him the ‘Steve Gadd of rock.’ … It’s like a gigantic locomotive thundering down the tracks with everything totally in sync.” – Deep Purple’s Steve Morse

To say that he’s the greatest – that’s still up for debate but he’s certainly up there with other rock gods. He was way ahead of his time. With the style and skills alone, he blows everyone out of the water.

Every single drummer on this earth aims to be as good or even close to Buddy Rich. You see, when fellow legendary sticksman Gene Krupa calls you “the greatest drummer ever to have drawn breath,” then you know you did something exemplary.

His technique, style and speed remain unmatched and unrivaled – the man is clearly a league of his own. He has no peers.

“I would say of just sheer technique he’s the best I’ve ever seen. I remember he did a sort of press-roll thing which lasted for about five minutes. It started off as a whisper, which you could barely hear, and it got so it filled the whole room of about 3,500 people and it was like thunder.” – Queen’s Roger Taylor

His drumming is explosive, exciting and exhilarating. It’s more than his technical proficiency because when he plays, it’s not all noise. Besides, if you think all he can boast of is speed, then you need to listen closely. He’s one of the greatest men to ever hit the skins, enough said.

Ginger Baker is synonymous with “the invention of drum solo.” Ginger is many things but he is neither predictable nor repetitive. It’s like you never know what to expect next but either way, you are left craving for it and after he’s done, he keeps you wondering why it wasn’t twice as long.

Too many times as a member of the power trio Cream, he has stolen the spotlight from Eric Clapton. You can name three of your favorite sticksmen and Ginger could have easily taken them on especially when he was at his prime.

“His playing was revolutionary – extrovert, primal and inventive. He set the bar for what rock drumming could be. […] Every rock drummer since has been influenced in some way by Ginger – even if they don’t know it.” – Neil Peart

He’s a virtuoso to the truest sense of the word. It was his drumming which became the backbone of Cream’s music. His influence wasn’t confined to rock ‘n roll alone. He’s just as influential in jazz and other genres.

Keith Moon is pretty much consistent on and off stage. He’s highly unpredictable, wild and intense. Well, how else will you describe a man who gets a kick out of flushing explosives down the toilet or putting cherry bombs in his kit? That’s how he rolls. But when he gets down to business, he always steals the spotlight.

Moon the Loon, at the height of his career, burned brightly. He may have sat behind everyone else but his drumming was the lifeblood that fed The Who’s music.

“I suppose as a drummer, I’m adequate. I’ve got no real aspirations to be a great drummer. I just want to play drums for the Who and that’s it.” – Keith Moon

Oh, Keith we beg to disagree. You are way more than “adequate.” His playing was always unconventional and unique in many ways. Even with all his crazy antics, he gets the job done.

Here’s a million-dollar question: is Neil Peart the most overrated drummer? The simple answer is NO. By its very definition, being “overrated” means getting more recognition than he actually deserves. And following that logic, we can confidently say Neil Peart is definitely one of the greatest kings of slam we’ve ever seen.

“We were so blown away by Neil’s playing. It was very Keith Moon-like, very active, and he hit his drums so hard.” – Guitarist Alex Lifeson

More than technical proficiency, Neil is creative and imaginative as evidenced by his stellar drumming. To be fair to everyone on this list, they are excellent in their own way especially since they have different styles and techniques.

In a band with members who are legendary in their respective musical instruments, Neil still stands out. And watching him live is witnessing a man work his magic. Over time, he has proven his skills and anyone who disagrees needs to watch his solos again.

We have two words for you – Moby Dick. Besides, when other rock icons point you as the greatest drummer to ever grace rock ‘n roll, that definitely says a lot about your skills doesn’t it?

It was John Bonham who’s responsible for Led Zeppelin’s sensual and soulful groove. He was fast, intense and with an impressive footwork. But his playing still had soul. He’s content staying in the background but he keeps up with everyone.

“John Bonham played the drums like someone who didn’t know what was going to happen next—like he was teetering on the edge of a cliff. No one has come close to that since, and I don’t think anybody ever will. I think he will forever be the greatest drummer of all time.” – Dave Grohl

Bonzo is untouchable. He’s a legend even among rock gods. Where other drummers just bang the skins, Bonzo goes for the rhythm. There’s speed and power but still with finesse. He can go from wild to subtle and still blow everyone away.