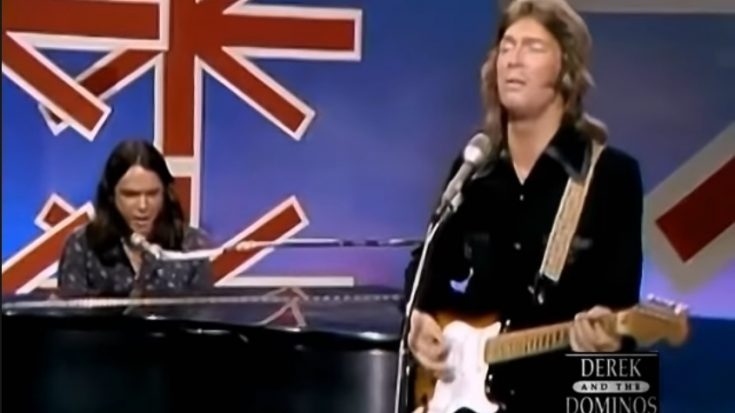 George Harrison’s debut album, All Things Must Pass, hit the right buttons as it launched him way past his Beatle identity. But this did more than just establish his solo career, as the proponents in making the triple album possible also spawned one of the greatest rock alliances in history.

Harrison already had the chemistry going with drummer Jim Gordon, bassist Carl Radle, and keyboardist Bobby Whitlock thanks to the Delaney & Bonnie sessions for a 1969 tour. He was also close friends with Eric Clapton, who is known for their collaborations on the Beatles’ “While My Guitar Gently Weeps” and Cream’s “Badge”. It helped that all four of them were available for All Things Must Pass’ studio sessions, and appeared together and apart throughout the undertaking.

In a 2000 Billboard interview, Harrison said: “I mean, we used to do that ourselves, you know, the Fabs, back in the early days. So you’d have a break, somebody’d go to the toilet, they have a cigarette, and next minute you’d break into a jam session and the engineer taped it on a two-track. When we were mixing the album and getting toward the end of it, I listened to that stuff, and I thought, ‘It’s got some fire in it,’ particularly Eric. He plays some hot stuff on there!”

Two Derek and the Dominos studio recordings were taped during these initial dates, although it was requested that they re-record the parts for the official release.

“We made a deal whereby [Harrison] would get [Phil] Spector to produce a couple of tracks for us in return for having the use of our band for his album. We recorded two songs with him, ‘Roll It Over’ and ‘Tell the Truth,’ at Abbey Road Studios, before turning ourselves over to George as his session musicians,” Clapton notes on his memoir, Clapton: The Autobiography.

While All Things Must Pass was just another working engagement between the studio veterans, the freedom they experienced during the session as opposed to their previous strictly-overseen commitments, which resulted in the formation of Derek and the Dominos.

“I’d arrived in the U.K. in 1969 with Delaney & Bonnie’s band, which included Carl Radle and Jim Gordon,” said Whitlock in 2015. “In the year following our arrival, we recorded nonstop. In early December, there was the Delaney & Bonnie & Friends [On Tour With Eric Clapton] album recorded in London. Eric Clapton and George Harrison played on our tour of the U.K. and Europe, which is how we got to know one another so well. We all played on Eric Clapton’s first solo album, then there was All Things Must Pass.”

Harrison was responsible for initiating the formation, contacting Clapton during a period where he and Whitlock were staying at the guitarist’s Hurtwood Edge estate writing songs that would eventually be part of Layla and Other Assorted Love Songs. “Eric picked it up, and he was going, ‘Mm-hmm. Yeah. Okay. Let me ask Bobby and see what he thinks.’ He hung up and he says to me, ‘That was George.’ And I said, ‘Harrison?’ He says, ‘Yeah. He wants us to put together a group and be the core band for his new record,” Whitlock shared to Guitar Player in 2020.

This was a new opportunity for Clapton to be onstage again after his brief stints with Cream and Blind Faith. In his autobiography, he said: “It was the beginning of one of the most extraordinary periods of my life, the memory of which is dominated by one thing — incredible music. It began with me just talking to these guys about music and getting to know them, and then we just played and played and played. I was in absolute awe of these people, and yet they made me feel that I was on their level. We were kindred spirits, made in the same mold.”

The amazing musicianship and chemistry of the sessions carried over to the success of All Things Must Pass, which became a six-time platinum record that topped the charts and spawned two top 10 singles, including the no. 1 hit “My Sweet Lord”. However, Derek and the Dominos actually released their album first, beating Harrison to the finish line even if they were supposed to work for him.

To be fair, the band had already paid their dues and had spare time to complete Layla and Other Assorted Love Songs in the studio, famously assisted by Duane Allman of The Allman Brothers Band.

In a 2004 interview with Songfacts, Whitlock said: “It was a band. It was an equal effort and opportunity band. We all shared equally in everything. Eric was a band member. … He wasn’t ready at the time to step out in the forefront without having some fire behind him, something he was real comfortable with. Jim Gordon and Carl Radle and myself made a pretty formidable rhythm section.”

It was Harrison’s material like “Thanks for The Pepperoni” and “Art of Dying” that Derek and the Dominos began to shape itself. He also sat in the early takes of “Roll It Over” and “Tell The Truth”, which was shortly retracted after being released as a debut single and only reemerged on the 1988 box set Crossroads, and the 1990 20th-anniversary reissue of Layla.

While the band didn’t have the same amount of commercial success as Harrison’s All Things Must Pass did, the single “Layla” carried the entire album over and became a classic rock staple, even if the band split after a single album being recorded.

“It became a success on its own, not because of promotion and not because of Eric Clapton,” said Whitlock to Guitar Player. “I remember when we were doing our tour of the United States. We were riding in a station wagon somewhere up in Minnesota, heading to a gig, and ‘My Sweet Lord’ comes on the radio. At the time, it was the No. 1 record in the country. And there we were, four guys in a car, heading to some little gig somewhere. I mean, we were the guys on a No. 1 record, and nobody even knew who the hell we were!”