The Story Of Ace Frehley’s Final Show With KISS 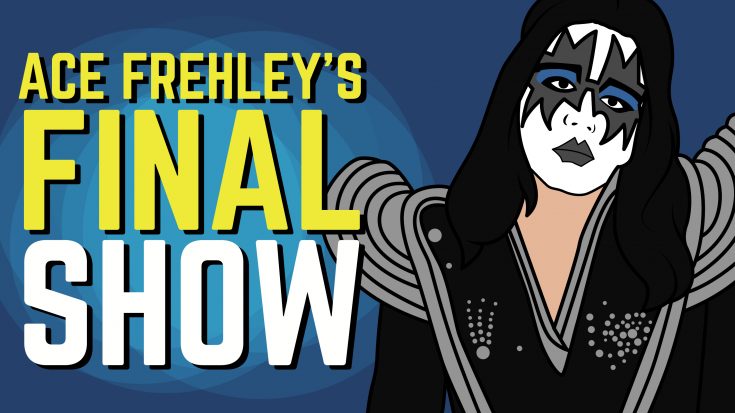 Ace Frehley’s last appearance with KISS was on December 3, 1980. But it wasn’t until much later that the world knew that his time with the band was over.

Everything started during the late ’70s, which was a slow and painstaking process involving a major steer away from the musical style they were known for prior to their shift to pop and disco-influenced material. It didn’t help that Peter Criss’ departure disrupted the balance of power between Frehley, Paul Stanley, and Gene Simmons.

In his 2011 autobiography No Regrets, Frehley wrote: “Before Peter left the band, there had always been a certain amount of creative and personal tension. It’s true that we often played two on two – me and Peter against Paul and Gene – but when tempers flared, I usually tried to be the peacemaker. With the loss of Peter, I soon realized things would never be the same.”


Frehley was also advancing rapidly as a songwriter himself, with his solo efforts gaining recognition more than his bandmates’ own, and with this came an ego that demanded more control over KISS’ material.

While he wrote and sang three songs on 1980’s Unmasked, it didn’t help the band recover from the slump they were experiencing. In contrast, the Australian performance of the Stanley-sung ballad “Shandi” became a top 5 hit that sparked renewed interest in the band, allowing them to support it with a sold-out tour.

“It was like a dream tour. I remember a lot of girls, a lot of champagne. Actually, that was probably one of the most fun tours we ever did because we were there for six weeks and we only did eight or 10 shows,” Frehley recalled in Kiss: Behind the Mask.

This didn’t stop things from going down the drain even further, especially evident with Music from ‘The Elder’. Frehley didn’t join them in person for the recording and instead sent his parts from his home studio. “When I see video footage of Kiss performing songs from that album on television, trying to look so serious and self-important. I don’t know whether to laugh or cry,” he said. The album’s commercial failure meant that there was no supporting tour in sight.

He finally decided to exit the band, recalling that: “I remember a conversation with my attorney, in his office,. He struggled to convince me that quitting Kiss was the stupidest thing I could do. … [But] I knew that if i didn’t leave the group, I was going to die. Everything about my life was in disarray at that time. I felt no connection to Kiss anymore and wasn’t happy about the direction the band was taking.”


Frehley appreciates the effort Stanley did in reconciling with him, however, saying: “Paul actually came up to the house and we hung out and talked for a while. We went to a mall in Stamford, Conn., did some shopping and tried to recapture some of our old friendship. I look back on that now and realize it was a generous gesture on his part. Paul tried very hard that day to talk me out of leaving, but there wasn’t much he could do to change my mind.”


This put Frehley and the band in a tighter financial situation as they had already negotiated a $2 million record advance for each new studio album, with the agreement that all three original members should be involved.

Ex-business manager C.K. Lendt explained: “Should Gene, Paul or Ace leave, Kiss would be in breach and Phonogram could cancel the deal. With Kiss’ recent string of failures and their tarnished public image, it was highly unlikely that any other record company would offer them a deal that would come close to matching what they had.”


Frehley’s project was finally given the green light but he wasn’t involved in 1982’s Creatures of The Night. This meant that other people had to take his place, five of them to be exact, including Robben Ford, Steve Farris, and Vinnie Vincent. Frehley still appeared on the cover and liner notes, along with the promotional video of “I Love It Loud”, as Lendt said it was important to “maintain the fiction that he was still in Kiss and not rock the boat with Phonogram.”


Frehley’s departure was finally made public when KISS started their 10th-anniversary tour on December 29, 1982, with Vinnie Vincent replacing him and sporting his own Ankh warrior makeup. This was plagued by poor ticket sales and cancellations but was a necessary step in KISS’ revival.

He then attempted to launch his solo career with three albums,1987’s Frehley’s Comet, 1988’s Second Sighting, and 1989’s Trouble Walkin’. Things weren’t as smooth when the ’90s rolled in, however, prompting Frehley to rejoin KISS for the successful reunion tour, which was followed by more tours and a reunion album before he finally left for good in 2001.


Frehley also stirred controversy by letting his replacement Tommy Thayer wear his Spaceman makeup. “They should have come up with different makeup like they did with Eric Carr and Vinnie Vincent,” he said to Village Voice in 2014.

His relationship with former bandmates Stanley and Simmons were quite contradicting, lobbying for ownership rights of his character at one time, then collaborating with them on albums on another. He then realized that he wanted to be back with the band, saying that: “I told Paul and Gene, ‘All the times you worked with me, I was a screw-up. I was always late and didn’t show up on time and missed recording sessions.’ I was telling them this year, ‘I’m now the guy you want me to be.’ Hopefully it sinks in, you know?”