The Story Behind “November Rain” By Guns N’ Roses 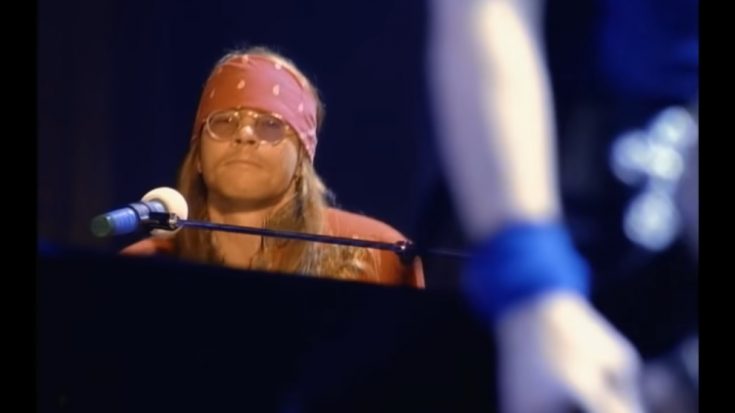 The ballad “November Rain” from Guns N’ Roses’ Use Your Illusion album was inspired by a short story by Del James titled Without You, which is part of a collection called The Language Of Fear. The book was reissued in 2008 after being out of print and now features a new intro by frontman Axl Rose that reads: “Del James has a personal knowledge of most of the situations he writes about, and has a love of the gutter from having been there.”

Axl Rose wrote the song and was originally intended to be 25 minutes long but was cut to around 9 minutes. It also holds the place of the longest song as a Top 10 hit, as well as having the longest guitar solo in a Top 10 single.

The music video for “November Rain” cost over $1.5 million to make but was a worthwhile investment in the end as it received massive airtime on MTV. Slash noted in a Q Magazine interview from 2004 that:  “We got into doing these huge production videos and by ‘November Rain’ it was too much, just too involved. At the end of the day it was a great video but that’s when I started realizing that it was getting out of hand.”

Matt Sorum was instrumental in bringing the song together thanks to his training in classical music. With regards to the orchestral elements the track, he said: “I worked on the arrangements for those songs, the way they broke down and the dynamics. The band wasn’t really that dynamic when I joined. It was a rock band, like ‘Go for it.’ Just loud. ‘When we’re on, it’s loud.’ And I came from an orchestral upbringing and classical music – I was in a wind ensemble. I sounded crazy to them: ‘We need pianissimo instrumental right here and mezzo-forte right here.’ And they’d go, ‘What?!?’

“Pianissimo means ‘quiet.’ And here we’re doing mezzo-forte,” he added. “That means ‘medium loud.’ Now, we’re going to go double forte here, which means, Okay, go back to your regular volume. I would explain all these sections to the band, and I said, ‘This needs to be a journey, you need to take people on a journey to this song.’ So that’s what we did on ‘November Rain.‘”