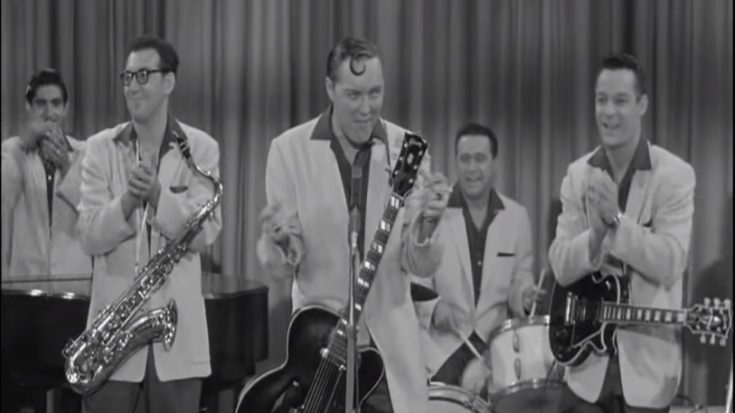 Another great influence that laid down the foundations of rock n’ roll was Bill Haley and his band, The Comets. Known for their crisp, formal aesthetic, Bill Haley developed his sound when he recorded his own rendition of the prevalent “Rocket 88”, which was made famous by Ike Turner’s Kings of Rhythm. Originally a country musician, Haley adapted this style of rhythm n’ blues and hillbilly fusion that became the band’s signature sound. Here are some of Bill Haley and The Comets’ greatest hits throughout the band’s career.

Borne from the 12-bar blues progression by Bobby Charles, the song originally used a New Orleans blues influence before being adopted by Bill Haley and The Comets. Haley and the Comets’ version featured a faster paced progression, and replaced the rhythm n’ blues shuffle into a more rock n’ roll arrangement. Their version also shed off some of that blues weight for an easygoing melody that showcased their own flair.

Bill Haley and The Comet’s immaculate and pure performance of the song was a fresh take on the budding rock n’ roll scene back in the day. With clear vocals and piercing backup ones, “Razzle Dazzle” features a duplicating lyrical progression that is upbeat and catchy, an interesting dance track of the past.

The simple lyrics and progression carries a strong charm with it, featuring a trilling piano melody and vocal parts that resound the lyrics with impeccable timing and modulation. The detailing brought on by the bluesy saxophone parts are a welcome addition to the song’s ensemble.

From a Big Joe Turner original, Bill Haley and The Comet’s version was a brighter, less explicit one that saw more commercial success. With an energetic slap bass implementation and a playful sax response riff, “Shake, Rattle And Roll” charted at the seventh position, and spent 27 weeks at the Top 40s list.

Bill Haley and The Comets’ version of this track became the most successful of its variants, reaching the top of the charts on its release. Following the famous rock n’ roll format that’s well-known and used by artists such as Elvis, the successful formula contained that authentic charm, with consistent beat patterns and sax parts that add to the full sound of the ensemble.