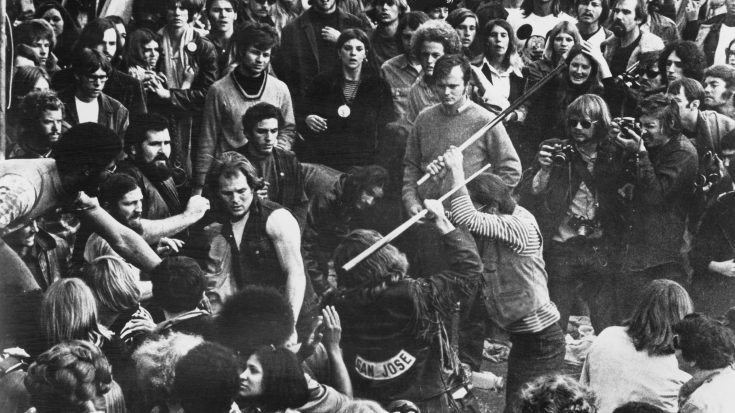 A still from the documentary film 'Gimme Shelter', showing audience members looking on as Hells Angels beat a fan with pool cues at the Altamont Free Concert, Altamont Speedway, California, 6th December 1969. The concert was headlined and organized by The Rolling Stones. The film was directed by Albert Maysles, David Maysles and Charlotte Zwerin. (Photo by Bill Owens/20th Century Fox/Hulton Archive/Getty Images)

Far from the peace and love of Woodstock in South East New York, the Altamont Free Concert has been remembered as a tragedy. The event was organized by the Grateful Dead and took place on December 06, 1969. Among the headliners were Santana, Jefferson Airplane, Crosby Stills and Nash, The Flying Burrito Brothers, and the Rolling Stones. There were over 300,000 fans in attendance.The infamous one-percenter motorcycle gang, the Hells Angels, were employed by the Rolling Stone’s management to work security for their performance. They were paid $500.00 worth of beer.

A member of the Hells Angels, Bill “Sweet William,” has been quoted talking about working the Altamont Concert. He said:

“We don’t police things. We’re not a security force. We go to concerts to enjoy ourselves and have fun.

By the time Santana was finished performing, the Hells Angels and the crowd were completely intoxicated. After the Flying Burritos completed their set, the Rolling Stones took the stage. Already, a woman who was 6 months pregnant had suffered a skull fracture from a beer bottle that was thrown from the crowd. After this, the Hells Angels had armed themselves with weapons made of sawed-off pool cues and motorcycle chains.  Someone had accidentally knocked down a Hells Angel’s motorcycle during Jefferson Airplane’s show and the motorcycle gang started to erupt with anger. Marty Balin of Jefferson Airplane tried to peacefully calm the fight- only to be knocked unconscious by a man in the gang.

The Rolling Stones at Sundown

The Rolling Stones waited until after sunset to perform. Mick Jagger had been punched in the head by a concert-goer immediately stepping out of his helicopter.  When the front man took the stage he cautiously tried to calm the crowd by announcing, “Just be cool down in the front there, don’t push around.” Once the Stones started playing “Under My Thumb,” everyone in the crowd including the Hells Angels were completely obliterated. Merdeith Hunter, 18, had kept running onto the stage, repeatedly being chased and beaten by the Hells Angels. After numerous attempts from the gang to keep Hunter back, the 18 year old pulled a .22 caliber revolver from his jacket. Alan Passaro of the Hells Angels, stabbed Hunter twice and pushed his gun away- killing Meredith Hunter.

Rolling Stone Magazine described the event: “Altamont was the product of diabolical egotism, hype, ineptitude, money manipulation, and, at base, a fundamental lack of concern for humanity.”