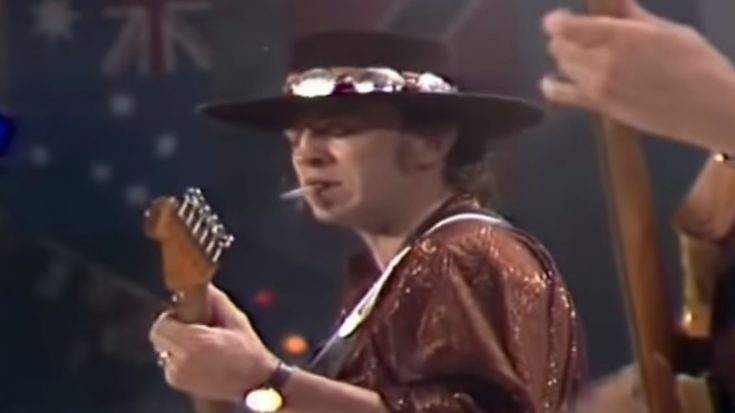 Stevie Ray Vaughan’s rise signaled the new breed of guitarists to take over the rock scene with the perfect mix of classic taste and modern execution. Indeed, the prodigy bluesman helped rejuvenate the scene with his jaw-dropping showmanship, which was deeply rooted in the classics no doubt. And while it is a proven fact that Vaughan was a beast in the studio, nothing compared when he melted faces on-stage, the audience being the deer to his headlight of a playing style.

While it may be heartwrenching to recall the guitarist’s final moments on stage, it didn’t dissolve the sheer mastery of his craft Vaughan displayed in this show. Standing in line with names such as Buddy Guy and Eric Clapton, SRV didn’t pull punches when he dished out this live swansong in 1990.

SRV’s decency led him to credit Lonnie Mack and his song “Wham” for helping the bluesman achieve his playing style. He finally had the chance to do so on his Live Alive tour. The guitarist poured his heart out without fail, as this was also his first performance where he was completely sober.

It has been every rocker’s dream to perform at New York’s Carnegie Hall, SRV himself included. He got the chance to do so a day after he turned 30, playing onstage with guests including his brother, Jimmie. The performance featured covers of Guitar Slim and Albert Collins songs, to which SRV enjoyed to his heart’s content.

SRV was slowly gaining popularity in the scene by the early ’80s, which was encapsulated in his performance at the El Mocambo club in Toronto, Canada. While this was already his second time at the venue, it still topped his first appearance as an opener for Steppenwolf as he dished out raw covers of Jimi Hendrix’s “Voodoo Chile (Slight Return)” and “Third Stone From The Sun”.

The Montreux Jazz Festival of 1982 was SRV’s first major exposure to a mainstream music audience, which wasn’t even the most exciting experience for him. Though a couple of crowd members booed him, he still powered through tracks that would soon comprise his debut album’s listing. Jackson Browne also took notice of the performance and invited SRV over to his studio after a jam session that transpired the night after his show.