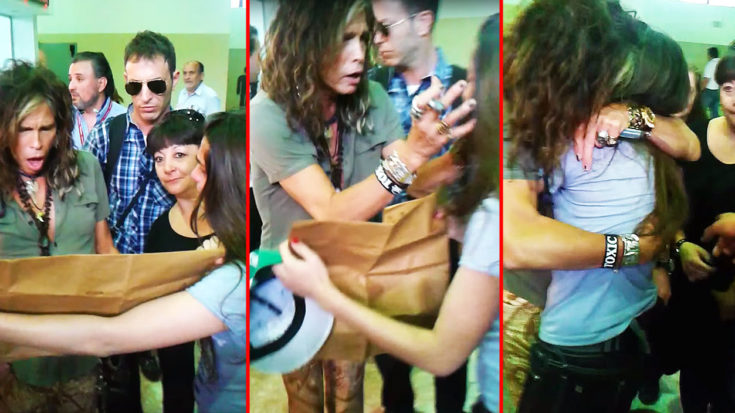 Steven Is The BEST!

No one is a stranger to see or know that Aerosmith lead singer, and solo artist Steven Tyler deeply cares about his fans. Tyler has commonly stopped to talk with fans, hug them, sign autographs and sometimes just say hello in hopes of making their day, and making them happy. Well, Tyler may very well have just made this fan’s life!

Tyler was greeted at the airport by a young girl who had a sign that basically stated that she was a huge fan, loved him, but was too young to attend his show that night and was heartbroken. Steven immediately embraced her for a long time as she cried on his shoulder. He comforted her, signed some of her items, including the sign, a Boston Celtics hat and her arm. Steven topped it off by planting a kiss on her cheek.

It’s pretty awesome to see major celebrities like Steven Tyler stop and make time with their fans. After all, they wouldn’t be successful if it weren’t for them! Never change, Steven, you’re the man!

Watch the beautiful moment for yourself down below!