Relive The 1974 Performance Of ‘Green Grass & High Tides’ Of Outlaws 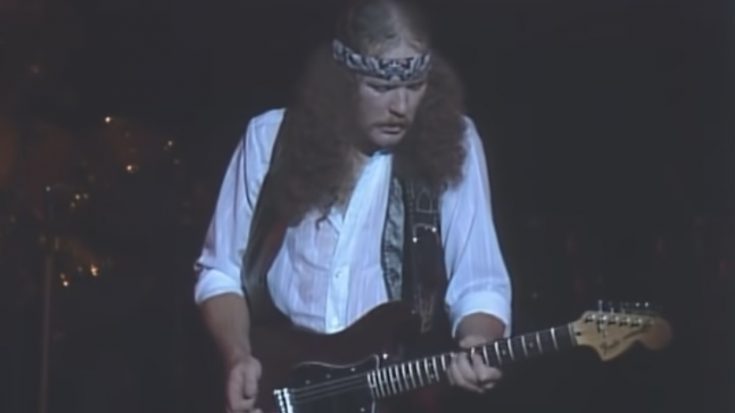 The Outlaws “Green Grass & High Tides” is the final track on their self-titled debut album released in 1975. It is one of the band’s best-known songs and has become a requested favorite at AOR radio stations. This number features its famed two extended guitar solos that take the song to over ten minutes of runtime.

Founding member Hughie Thomasson shares how the song came to be: “I wrote that song in Saint Augustine, Florida. We went to a cookout on the beach and everybody forgot to bring their guitars. I was standing by the ocean and there was a breeze and the words kept coming to me. It’s about all the rock stars I liked that died had come back and were playing a show just for me. Like Jimi Hendrix, Janis Joplin and Jim Morrison. And eventually more of course.”

According to Henry Paul, the song isn’t about marijuana but instead points out to rock and roll legends who have passed on, while the title was taken from the Rolling Stones’ “Best Of” collection called Big Hits (High Tide and Green Grass).

He said: “From what I gather, there was an album out, the best of the Rolling Stones, called ‘High Tides and Green Grass.’ That was the name of the Rolling Stones’ greatest hits – this is like 1966 – and I think it was a manifestation of that title turned in reverse, ‘Green Grass and High Tides.’ I know that much. And I know that it was a song written for rock and roll illuminaries, from Janis Joplin to Jimi Hendrix, and it had nothing to do with marijuana. But it had to do with, I think, a specific person’s lyrical look at rock and roll legends. ‘As kings and queens bow and play for you.’ It’s about Jimi Hendrix and Janis Joplin. ‘Castles of stone, soul and glory.’ A lot of it is just sort of a collage of words that really don’t have all that much to do with anything, they just fit and sounded right. But I have to say it’s one of my favorite lyrics. My songwriting is more Steinbeck, really rooted in accuracy and reality; this is definitely Alice In Wonderland. It’s the whole ‘White Rabbit.’ It’s sort of like one of those magic lyrical moments that will forever be mysteriously unclearly conceived.”