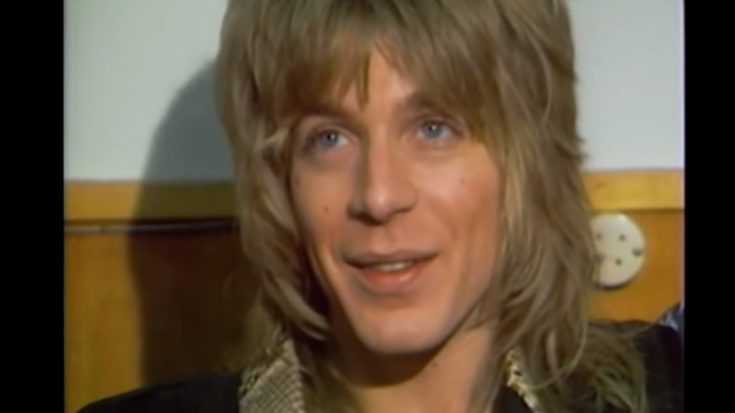 With the recent news of the late Randy Rhoads’ equipment being stolen, an update said that most of the items have already been recovered. The Musonia School of Music, founded by Rhoads’ mother Delores (Randy also taught guitar here), was broken in by thieves on Thanksgiving night, leaving the main room cleared, and hauling over 40 years worth of memorabilia, family items, and many more, including Rhoads’ first-ever guitar.

Reports say a woman named Bobbi Fredriksz spotted the stolen items in a dumpster at North Hollywood, while walking her dog on an early Sunday. “As I was laying in bed, not feeling well, it came on [the TV, and] I was like, ‘Wait a minute, oh my God.’ [So] I ran all the way back over here it was still there,” she said. “Somebody else started to see it and called police,” Fredriksz said.

The police have already recovered most of the stolen stuff, including Delores Rhoads’ trumpet which she received in her childhood. Nick D’Argenzio, Rhoads’ nephew, said “The trumpet is valuable because it’s my grandmother’s. She passed away recently. This is her legacy.”

Rhoads’ first guitar remains to be missing, though, which was a 1963 Harmony Rocket. Even the Prince of Darkness pitched in to help, posting a $25,000 reward to those who could point out the suspects or lead to the retrieval of the items.

In an Instagram post, Ozzy said, “The school became something of a pilgrimage to his fans from all over the world. It is a place where the Rhoads family happily opened their hearts to share the life of Randy. As you can imagine, the items that were stolen, including Randy’s first electric guitar, are irreplaceable to the Rhoads family.”

As many of you have heard, the Musonia School of Music in N. Hollywood, CA (the school where Randy Rhoads famously taught guitar) was viciously robbed on Thanksgiving night. Musonia was run by Randy’s late mother, Delores, and after his death 37 years ago, the school became something of a pilgrimage to his fans from all over the world. It is a place where the Rhoads Family happily opened their hearts to share the life of Randy. As you can imagine, the items that were stolen, including Randy’s first electric guitar, are irreplaceable to the Rhoads Family. I am heartbroken that these treasured physical memories of Randy and Delores have been taken from the family so I’ve decided to personally offer a $25,000 reward for information leading to the arrest and conviction and/or return of all stolen items. For information regarding the theft or return of these items please contact: Nick D’Argenzio Phone: 818-281-7893 E-Mail: [email protected] Here is a list and images of the items that were taken: · Randy Rhoads’ First Electric Guitar Owned, Harmony Rocket Est. 1963 · Randy Rhoads’ Original Quiet Riot Gear – Peavey Amp Head, 1970s · Randy Rhoads Series Marshall Head, Rare Protoype No. 1 or 2 given to the family by Marshall Company. · Delores Rhoads’ First Trumpet, a Prewar/Great Depression Era Silver Fresh Besson Trumpet. This was given to her as a child by her medical doctor father in exchange for medical services as a barter during the great depression. This subsequently sparked Delores Rhoads long lived music career. · 40 years of fan gifts to the Rhoads Family, memorabilia, all photos of Randy Rhoads, the Osbournes, Delores Rhoads, and miscellaneous instruments were taken. The photo shown in the main room was cleared out.