He Plays ‘Comfortably Numb’ On An 18-String Guitar—Watch Out David Gilmour! 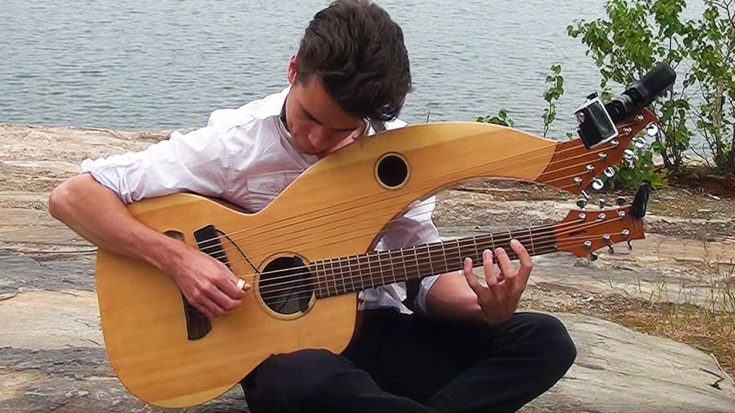 Who Knew This Song Could Get Any Better?

If you thought Pink Floyd’s song “Comfortably Numb” off the band’s critically acclaimed album The Wall couldn’t get any better than it already is, you’re wrong. Rising YouTube sensation Jamie Dupuis uploaded a video of himself covering the Floyd masterpiece on a harp guitar. Dupuis turns this grand psychedelic opera song into a easy, chill and relaxing instrumental jam. For the song’s ending solo, Dupuis appropriately busts out his electric Fender Strat for a bluesy take on David Gilmour’s genius solo. The vibe Dupuis injects into this song is beautiful, and will send chills down your spine and may even bring a tear to your eye. What a wonderful way to resurrect an all-time classic.

Dupuis is an up-and-coming guitarist who shares his work on YouTube. One of the artist’s many talents (showcased in this video) is his ability to play the harp guitar, a double neck guitar with the top neck containing harp-like un-fretted and unstopped open string, similar to a harp. Dupuis is known for covering a wide variety of songs, ranging from classical to modern. Pink Floyd’s Gilmour has been out on a solo tour, and recently returned to Pompeii, Italy for a historic performance. We imagine that if Gilmour heard this, he would probably enjoy it as much as we did. Hopefully it gets to him!

You can watch Dupuis’ amazing cover of “Comfortably Numb” down below. Also be sure to check out his other covers on his channel!