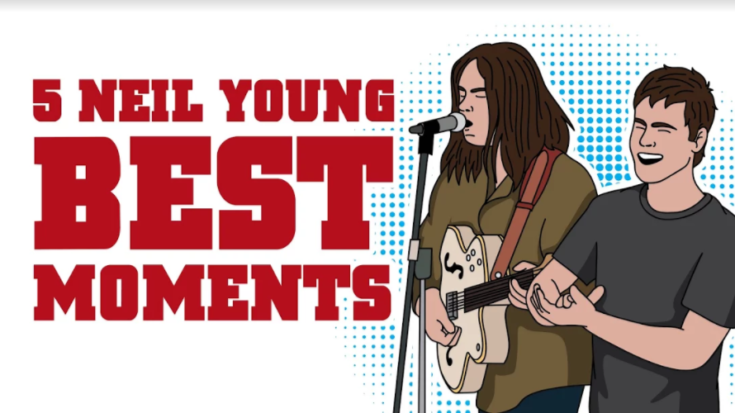 Showing His Brilliance One Song At A Time

Neil Young is one of those musicians who can take you to places without you needing to leave the comforts of your own home, or room or bed. He’s been blowing us away since the ’60s and while we love the studio versions of his classic tunes, nothing beats his live performances.

There was always something so pure and raw with the way he plays his guitar and sings, not to mention his excellent storytelling. He’s the living proof that you don’t need too much showmanship to delight the audience and give them a grand time. Whether it’s electric or stripped-down acoustic, the man is clearly overflowing with talent. He’s had his fair share of unsuccessful and even disappointing records but that’s for another day.

This time, we handpicked five of his finest musical moments which is easier said than done, actually. We could go for 10 easily. Then again, he didn’t earn his legendary status for nothing.

If this doesn’t make you feel things, you’re probably made of ice. Clearly, he was a musical genius and it’s stuff like this that makes you long for classic rock because we know we’ve said it many times but it’s worth repeating – they don’t make music like this anymore.

There’s always something about his acoustic performances that’s eerie and beautifully haunting. It feels like even in the middle of a crowd, Neil Young is sharing something personal and intimate to you.

“One of the strengths of Young’s acoustic sets is that they carry a distinct identity from his electric work; they’re not merely “unplugged” versions of his high-volume catalog, but a completely different mood designed to emphasize his wounded nasal voice and delicate finger-picking.” – Pitchfork’s Rob Mitchum

We don’t know what kind of sorcery this is – how he channels his emotion to the listeners through his guitar. In fact, the entire live performance was peppered with magic, that’s the only way to describe it.

We know this isn’t just Neil Young but who wouldn’t want to remember his days with CSN? We love their chemistry and how energetic this whole performance is. Our favorite part is when Stephen Stills and Young trade licks – we just had to put that moment on repeat!

We live for this kind of jam – groovy and just leaves you craving for more. The only thing we don’t like about it is that it didn’t go on for 20 minutes more. It’s never long enough to be honest.

“If I was ever going to teach a master class to young guitarists, the first thing I would play them is the first minute of Neil Young’s original “Down by the River” solo. It’s one note, but it’s so melodic, and it just snarls with attitude and anger. It’s like he desperately wants to connect.” – Trey Anastasio

“Down by the River” is the song that showcased Young’s talent. There’s no question why he’s called the Godfather of Grunge. He knew what he was doing and he did it so dang well. We’ve seen this more than twice and it still leaves us in awe every single time.

Neil Young lived and breathed rock ‘n roll and it showed in his live performances. What did we tell you earlier? He can go from wild, hard rock to slow and spine-chilling acoustic and bring it every single time. Sometimes you can’t help but wonder, is it the same man?

Neil Young thrashing like a madman is like a punch in the face or a bucket of ice cold water on your head. It doesn’t always work for everyone but with Young’s monstrous talent, anything is possible.

“I had my trainer, and we just lifted weights and I did calisthenics [in my dressing room] to get my blood to the level it would be at after performing for an hour and 25 minutes.” – Neil Young

It’s exhilarating. His ferocious guitar work is smoking and just insane. He’s known for his improvisational jams which we can never get enough of. And well, this electric performance is just too hot to handle.

It’s the song you want to play when you just want to relax and chill after a very long day. We’ll just put it out there, no one does it like Neil Young. He was obviously passionate about his craft and a performance like this, stripped down to the core, seemingly takes us to places we never even knew existed.

It’s serene but hypnotic all the same. It’s as if he somehow mastered the art of putting his audience in a trance! Oh no wait, he definitely did.

“It can be dangerous working in a full moon atmosphere, because if there are things that are going to go wrong, they can really go wrong. But that’s great, especially for rock ‘n’ roll.” – Neil Young on his obsession with the moon

The melody and vocals – how can one song be the epitome of musical perfection? Throughout his entire career, he’s had some hits and misses but “Harvest Moon” remains a fan favorite and it’s no surprise why.

The man and his guitar – who would think they could create something as magical as this? You can be a grown adult who doesn’t cry easily but this piece could move you to tears just a few seconds into the song. It will get you every single time – at least, that’s what it does to us.

This is Neil Young at the top of his game. His brilliance always shines through. “Great” doesn’t even begin to describe it.

“About that time when I wrote (“Heart of Gold”), and I was touring, I had also—just, you know, being a rich hippie for the first time—I had purchased a ranch, and I still live there today. And there was a couple living on it that were the caretakers, an old gentleman named Louis Avila and his wife Clara. And there was this old blue Jeep there, and Louis took me for a ride in this blue Jeep. He gets me up there on the top side of the place, and there’s this lake up there that fed all the pastures, and he says, “Well, tell me, how does a young man like yourself have enough money to buy a place like this?” And I said, “Well, just lucky, Louis, just real lucky.” And he said, “Well, that’s the darnedest thing I ever heard.” And I wrote this song for him.” – Neil Young

For a highly creative person such as Young, he finds inspiration everywhere. And to the man he wrote this for, how did he feel when this became a classic tune which still earns praises until today?

This performance was unforgettable then and it still is now. Looking back, he won us over with his simplicity – no theatrics, props and what-not. It was just him and his music.