Neil Diamond Dusts Off This Forgotten Fan Favorite To The Delight Of One Very, Very Lucky Audience 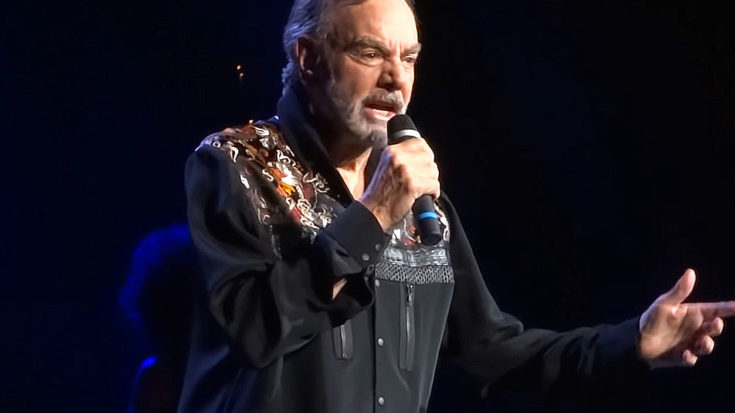 When Neil Diamond announced plans for a massive world tour in celebration of 50 years on the stage, he never imagined it would become a farewell – but what a farewell it was. The 77-year-old legend announced yesterday that his recent Parkinson’s diagnosis has forced him to retire as a live performer as he immediately canceled the upcoming Australian and New Zealand legs of his 50th anniversary tour, but before the disease had him in its clutches Diamond gave fans a tour to remember.

Classics like “Cherry Cherry” and “Sweet Caroline” kept the crowds on their feet for hours while deep cuts “Jazz Time,” “Lonely Looking Sky” and “Skybird” kept them in thrall and wondering what else might be up Diamond’s sleeve, and he didn’t disappoint; the May 30, 2017 date on his tour saw Diamond resurrect the 1976 fan favorite “Dry Your Eyes” to the audience’s delight after having left it untouched since The Last Waltz, and his reason was simple –  “It’s been relegated to the attic,” he said. “I think it’s due to come out after 40 years.”

Fun Fact: Diamond released his first single “Solitary Man” in 1966 and never looked back, earning songwriting credits for The Monkees’ 1967 smash hit “I’m A Believer” and taking on the world as a highly sought after solo artist.

He beautifully reworked “Dry Your Eyes,” a song written about the emotional and social aftermath of the assassinations of Dr. Martin Luther King, Jr. and Bobby Kennedy, into a tribute to the victims of terrorism just 8 days after the horrific Manchester Arena bombing that claimed the lives of 23 and left hundreds of others injured. While we’re sad that Neil no longer gets to do what he’s loved to do for more than half a century, there’s something poignant about “Dry Your Eyes” at a time like this; even when we’re given a million reasons to be sad, we can always count on Neil to be the proverbial arm around our shoulders and share a little sunshine where it’s needed. Check out Neil’s 2017 performance of “Dry Your Eyes” in the video below and hopefully it’ll bring a little sunshine into your day, too.