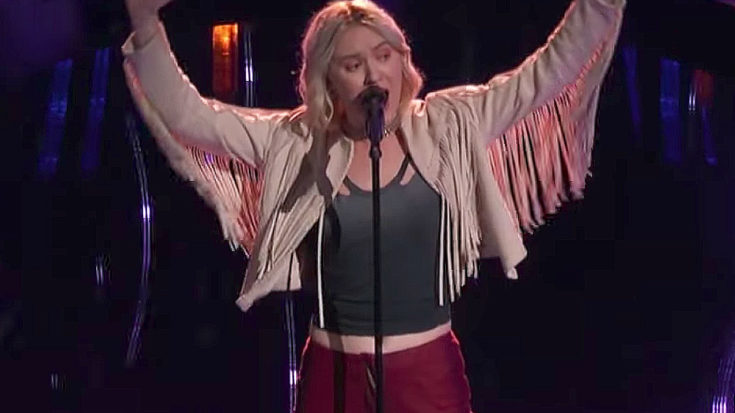 The Voice Gets A Healthy Dose Of Rock N’ Roll

One of the hottest shows on television, The Voice got a healthy dose of that Fleetwood Mac magic when contestant Chloe Kohanski took the stage, bringing with her a searing cover of “The Chain” that was so good, it sent judges Miley Cyrus, Blake Shelton and Jennifer Hudson scrambling to pick her first.

The 23-year-old Nashville native, bearing a striking resemblance to Miley Cyrus both in appearance and voice, originally set out to become an English teacher until she realized that music was where her heart really lay and joined a blues band, giving her the chance to show off the gritty, smoky voice that will no doubt take her to the top of the competition.

‘The Chain’ came to represent the resilience of Fleetwood Mac and the strength of their bond as they continued on for many years despite their personal and professional difficulties. It’s the first song they play in concert.

While Chloe sang, Voice judges Miley Cyrus, Jennifer Hudson, Adam Levine and Blake Shelton all sat with their backs turned, listening and liking what they heard but not quite ready to commit to turning around; it wasn’t until Chloe ramped up her “The Chain” performance with a guttural wail that she quickly got the attention of Shelton and Cyrus, who raced to slam their buzzers in hopes of snagging the singer for their teams and Jennifer Hudson shortly after, who turned around to see what the commotion was all about.

We won’t spoil the surprise as to which team Chloe Kohanski ultimately chose, but we’ll give you a hint: there will be a whole lot of rockin’ and rollin’ going on! Besides, with a talent like hers, she’ll be a crowd favorite in no time.