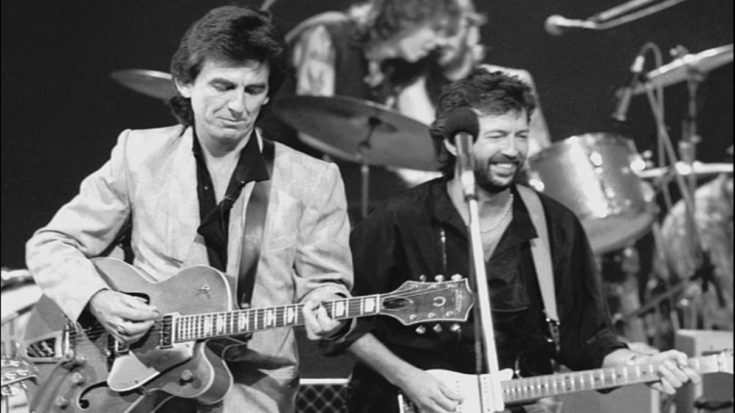 Live In Japan was a double live album that was released in 1992 and was credited to George Harrison with contributions from Eric Clapton and Band. Following 1971’s The Concert For Bangladesh, this was Harrison’s second live compilation, and it was the penultimate latest project during his lifetime. George Harrison did not undertake a significant amount of touring beyond his time spent with The Beatles. But he made the most of the opportunities he was given.

George’s next tour wouldn’t take place for another 17 years. To date, the only time he has performed with Clapton was in December 1991, when he played a series of concerts in Japan. In 1992, George Harrison’s Live in Japan album was released, and it’s an upbeat and thrilling celebration of Harrison’s 20 years as a solo artist and Beatle.

Speaking with Q magazine, Clapton recalled the moment Harrison decided to do the tour with a perfectly-lined up band. “I don’t think he’s ever had the experience of playing for an audience with a great band,” Clapton said. “The Beatles played to 10-year-old kids who screamed their heads off. He’s stopped smoking, he’s got himself into fighting-fit shape, he’s got my lighting, my sound, my band. It’s a crack team.”

The group performed several of Harrison’s classics, along with lovely song covers by different artists. But fans were a bit more excited to hear the Beatle classics, which included “While My Guitar Gently Weeps.” One of The Beatles’ most famous songs, “While My Guitar Gently Weeps,” can be found on their 1968 album The Beatles (also known as the White Album). It was composed by Harrison, with Eric Clapton playing the lead guitar. In an exercise for randomness, the Chinese I Ching inspired Harrison to write this gem.

Listen to this rare live version of the duo’s performance in Japan below.