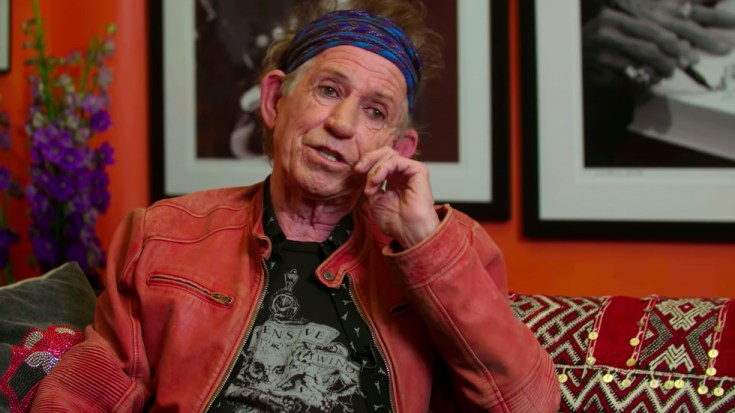 Keith Richards is about to release a forthcoming expanded 30th-anniversary reissue of his 1988 solo debut, “Talk Is Cheap”, and he is giving his fans a teaser of the new music from the album that he will be sharing. The Rolling Stones icon has recently shared the new lyric video for “Big Town Playboy,” a previously unreleased track that was recorded during the making of  “Talk Is Cheap”.
The song is a pretty solid blues shuffle that features former Rolling Stones guitarist Mick Taylor and Rock and Roll Hall-of-Fame inducted blues pianist Johnnie Johnson, who also worked closely with the legendary Chuck Berry.

“This album holds up,” Richards said of the reissue of his debut solo album.“I’ve been listening to it and not through the mists of nostalgia either because it doesn’t affect me that way. This is more than the sum of its parts. I really admire it. We were having fun and you can hear it,”  he adds.

The super deluxe reissue of Talk is Cheap is in a case hand built and aged by the @Fender Custom Shop using the same wood, plastics and metal as Keith's Micawber Telecaster! Tap link on @officialkeef profile to preorder or visit store.keithrichards.com!

“Big Town Playboy” is one of six bonus tracks included on the expanded 2019 reissue of his first solo release.

The song was actually originally introduced with the lead single, “Take It So Hard”, but ended up not getting released with it.

The 30th Anniversary reissue of “Talk Is Cheap” will be released through multiple formats on March 29. There will be Super Deluxe and Deluxe box sets, with an 80-page book featuring a new interview with Richards available.

This new release will be out before Richards and The Rolling Stones launch their 2019 “No Filter” tour at the Hard Rock Stadium in Miami Gardens, FL on April 20.

Watch the lyric video for “Big Town Playboy” down below: