Funny Clip Of David Bowie Doing An Impression Of Jagger 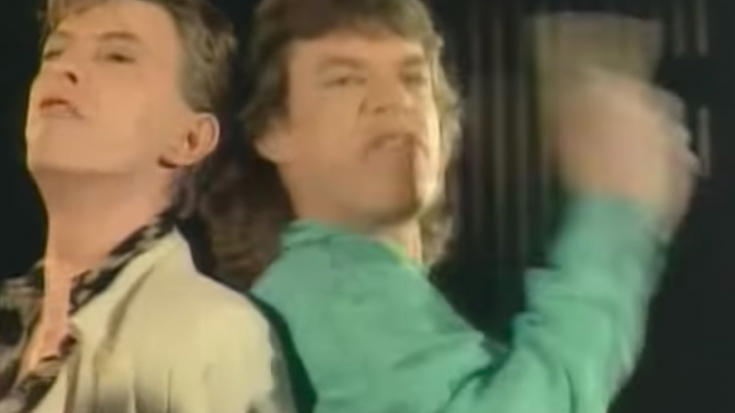 It’s no secret that Mick Jagger and David Bowie were pretty good friends. So much that it’s normal for them to sort of make fun of each other on national television. They met in the early 70s and even worked together a bunch of times. They even have a song (and an unforgettable music video) together for their cover of ‘Dancing in the Street’ which prompted rumours of a secret love affair between the two rock icons. Jagger even recalled in an interview with Rolling Stone how their friendship worked, saying,

“There was always an exchange of information within our friendship. And I suppose there was always an element of competition between us, but it never felt overwhelming. When he’d come over, we’d talk about our work — a new guitarist, a new way of writing, style and photographers. We had a lot in common in wanting to do big things onstage — using interesting designs, narratives, personalities.”

Jagger’s favorite memory of Bowie was when they did “Dancing in the Street”.

“We had to record the song and film the video all in one day. We walked straight from the studio onto the set of the video,” said Jagger. “At the end of the day, we were saying, ‘See, it can be done! Why are spending years in the studio?’ We enjoyed camping it up. The video is hilarious to watch. It was the only time we really collaborated on anything, which is really stupid when you think about it.”

Now Bowie seems to be fond of Jagger as well. In a vintage Michael Parkinson talk show appearance of Bowie, he showed a pretty hilarious impression of Jagger. He told an anecdote of how much of a Little Richard fan he was. And how he first encountered the Stones when they were the opening act for Little Richard way before they were even famous.

“I’ve never seen anything so rebellious in his life and some guy yells to the stage “get your haircut”, he recalls. Then, Bowie shifts to imitate Mick Jagger’s accent and talking mannerism and says Mick Jagger sarcastically answered, “while I look like you?”
And then he thought “oh my god this is the future of music”, and the audience burst into laughter.

Watch the interview below: