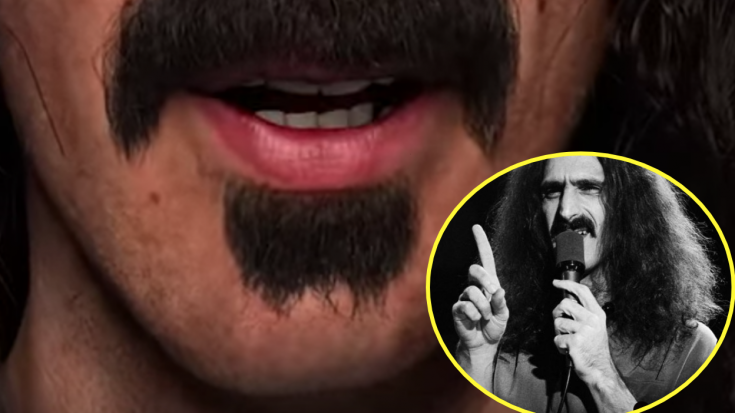 Frank Zappa is back – and we’re not completely sure how to feel about it.

No, he’s not roaming the earth as something out of AMC’s The Walking Dead; Zappa, who died in 1993 at the age of 52 after a lengthy battle with cancer, has returned as a hologram just weeks ahead of his much-hyped hologram tour.

Appropriately titled “The Bizarre World of Frank Zappa,” the tour kicks off on April 19th and runs until July 14th and finds Zappa’s hologram using hours of never-before-seen footage from the early 70s to create an unforgettable experience for fans who have been waiting to see it released from the Zappa family vaults, where it’s been for the last 44 years.

Today, his estate released a short video giving fans the first ever look at Zappa as a hologram, and he’s so lifelike that it’s actually a little terrifying.

The video, which premiered on Frank’s official YouTube channel, features the late legend responding to recent controversy surrounding the tour. The newly resurrected Zappa is on camera for only a few moments, saying “I’m a person who likes to do what he wants to do whether people like it or not and what I do is designed for people who like it, not for people who don’t.”

But before anything else, the video comes with a tongue in cheek nod to Zappa’s threat to include a “Warning Guaranteed” sticker on all of his music after his 1985 showdown with Congress.

If nothing else, it’s good to know that even in death, Frank Zappa knows exactly how to stick it to the man wherever and whenever possible. Check out the video just below this article, and let us know – is his hologram creepy or cool? Oh – and while you’re at it, check out this list of tour dates for The Bizarre World of Frank Zappa to see if his hologram is coming to a city near you!