Flashback: The Birthday Gift That Made Steven Tyler Cry In Front Of Millions – On Live Television 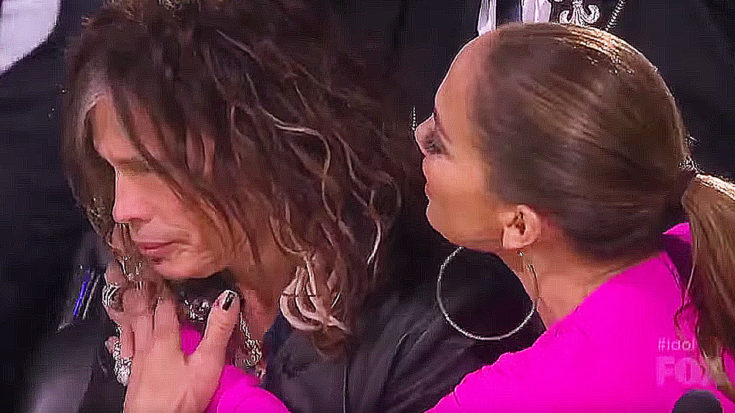 Aerosmith Singer Gets Surprise Of A Lifetime

What on earth do you give one of the biggest rockstars on the planet for their birthday? For Aerosmith frontman and budding country singer Steven Tyler, the gift of a lifetime wasn’t something flashy (well…actually, maybe a little flashy) and expensive, it was something a little closer to the heart – and it was enough to make one of rock’s biggest bad boys cry on national television.

Steven’s 64th birthday was spent on the set of hit reality show American Idol, and towards the end of the show he was met with all of the show’s top 10 finalists assembling onstage.

…Until the crowd onstage parted, revealing an extra special guest.

Surprise! It was Joe Perry, stopping by to wish his old friend Steven a happy birthday! Daughters Liv and Chelsea, son Taj, and grandson Milo were also in on the big surprise:

Thinking it was just going to be one big chorus of “Happy Birthday,” Steven received the surprise of a lifetime when after a few moments, special guest and Aerosmith bandmate Joe Perry crept out from behind the show’s contestants for a very, very special rendition of “Happy Birthday”!

“I didn’t know what to get you for your birthday, so I guess this’ll have to do.”

Join us in celebrating 70 years of one of the most rockin’ human beings to walk the planet with this footage of Steven’s special moment, and when you’re done crank up a little “Walk This Way” for the birthday boy.