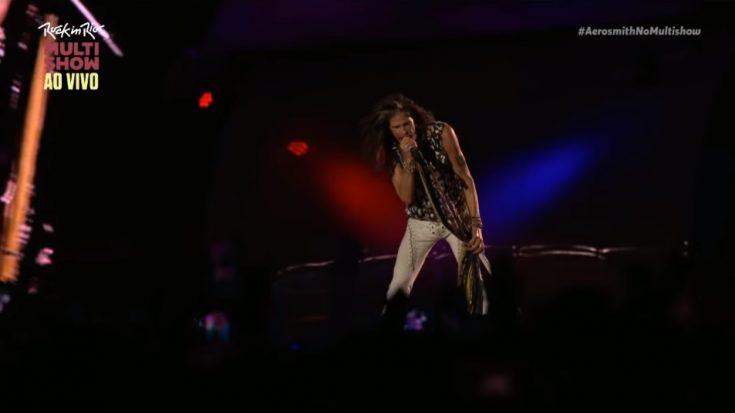 Who doesn’t love the bad boys from Boston? One of the most successful hard rock bands of the 70’s with a career that spans almost 5 decades, Aerosmith has paved the way for rock n’ roll to innovate throughout the years. Let’s take a comprehensive trip down memory lane and retrace the interesting journey of this gang of rockers we all know and love!

In 1964, Steven Tyler had his own band called the Chain Reaction, while Joe Perry and Tom Hamilton was in Jam band, a blues oriented act. Down the line, Joey Kramer joined Perry’s band when they moved to Boston. The two bands met in the same gig by 1970, where Tyler fell in love with Jam Band’s sound. After several proposals to become the lead vocalist, Tyler joined Jam Band. They eventually donned the name Aerosmith after Kramer’s suggestion. Former member Ray Tabano left the band in 1971, and was replaced with rhythm guitarist Brad Whitford.

After performing at Max’s Kansas with Columbia Record’s president in the audience, Aeromsmith signed with the label for $125,000, and released their successful debut album, Aerosmith, in 1973. Rooted in blues-inspired rock, this album saw the massively popular track “Dream On“. After a lengthy tour schedule, the band’s second album Get Your Wings was released in 1974, contained popular tracks such as “Same Old Song and Dance” and “Train Kept A-Rollin’“. Come 1975, Toys In The Attic was released, cementing the band’s popularity even overseas. Hits like “Sweet Emotion” and “Walk This Way” became the most recognizable songs of the collection.

Aerosmith’s notoriety as a party band was prevalent in this era, with Tyler and Perry being dubbed as the “Toxic Twins” due to their association with drugs.

Aerosmith’s Rocks album was released in 1976, and is considered to be the rawest form of  the band’s rock sound, garnering praise from contemporaries and successors alike. In 1977, the band released their fifth record, Draw The Line. While the album wasn’t as successful as previous releases were, “Draw The Line” and “Kings and Queens” were crowd favorites during concerts. A tour in support of the album took place, but was poorly executed due to their drug problem and hectic schedules taking toll on the live performances.

1978 saw the band starring in the movie Sgt. Pepper’s Lonely Hearts Club Band as the Future Villain Band, where they covered the Beatles’ hit, “Come Together“.

The band started recording their next album in 1979, but went on tour instead to take a break from recording sessions. In a Cleveland show in July 1979, Joe Perry’s wife and Tom Hamilton’s wife got into a scuffle backstage, to which Tyler confronted Perry about his wife’s antics. The argument got heated and Perry left the band after it, taking the material he wrote with him on the way. He went on to establish his own band, The Joe Perry Project.

Night In The Ruts was released in 1979, and only managed to grab gold certification by the time. A tour commenced in support of the album, but fewer and fewer attendees were present in shows, due to the waning popularity of the band. Tyler even collapsed onstage due to heavy drug use during one of the shows.

The compilation album Greatest Hits was released in 1980, and even though it didn’t do well initially, it eventually became one of band’s best selling album in the US. Steven Tyler met a motorcycle accident in the fall of 1980 however, injured and hospitalized for about 2 months.

1981 saw the band starting on the album Rock In A Hard Place, where Brad Whitford took his leave after recording the first single. Whitford tried to do a tandem act which failed, and then eventually joined Joe Perry’s band after. Rick Dufay took Whitford’s place during his absence. Rock In A Hard Place was released in 1982, with only the single “Lightning Strikes” charting on the 21st place. With Aerosmith challenged in getting gigs and filling clubs, the Night In The Ruts tour wasn’t going anywhere. Tyler and Perry was reunited in a show in Worcester, and got high backstage that resulted in Tyler collapsing again.

Perry and Whitford came to see Aerosmith perform at the Orpheum Theater in Boston on February 14, 1984, which ignited discussions about their possible return into the band. Several months later, the original members reunited, with Tyler being quoted, “You should have felt the buzz the moment all five of us got together in the same room for the first time again. We all started laughin’—it was like the five years had never passed. We knew we’d made the right move.”

The band’s reunion tour Back in The Saddle, commenced shortly after the reconciliation. They were still plagued by the drug problem, which caused troubles, even though the shows were consistently attended by fans. Aerosmith signed to Geffen Records  to work on a comeback album, although Columbia was still earning royalties due to the live album releases.

The band released Done With Mirrors in 1985, marking their return in creating material, but failed to attract interest, raking only a gold certification to boot. However, Aerosmith saw relevance once again, with RUN-D.M.C’s cover of their hit “Walk This Way“, when they participated in the track, the iconic music video breaking the barrier between rock and hiphop. Tyler also had a personal success after completing his rehabilitation, after support from the band and their peers, who believed the band would not rise again if Tyler failed to get treated in time.

Aerosmith needed to land big on their next album or go bust, and churned out Permanent Vacation, which went on to become one of the band’s most massive successes in over a decade. “Dude (Looks Like a Lady)”, “Angel”, and “Rag Doll” all became chart rankers in the 20’s bracket. Tyler credits the album to be one they did completely sober.

1989’s Pump was even more successful, with hits like “Love in an Elevator”, “Janie’s Got a Gun”, and “What It Takes” taking top three spots each. Aerosmith also received their first Grammy award  for Best Rock Performance by a Duo or Group with Vocal, with “Janie’s Got a Gun”. After an extensive 12-month tour for Pump, the band took a break before continuing on to make Get A Grip.

1993’s Get A Grip was also successful, ranking at number 1 at its debut. Although critics hated the fact that power ballads dominated the tracklist, “Cryin’“, “Amazing“, and “Crazy” became in-demand hits of the airwaves. Big Ones saw its release in 1994, and brought the biggest tracks from Permanent Vacation, Pump and Get A Grip into a compilation album, along with two originals, “Blind Man” and “Walk On Water“. The band was also one of the performers for Woodstock ’94.

Nine Lives was released in 1997, but flopped in comparison to the previous releases, with 2 year tour suffering problems due to Tyler being injured at one show, and Kramer suffering from burns after his car caught fire in a gasoline station. This slump was saved when Aerosmith released “I Don’t Wanna Miss A Thing” in 1998, for the film Armageddon. The power ballad became Aerosmith’s most successful single, and was their first chart topper that spanned for over 4 weeks.

The new millennium was ushered by Aerosmith with their SuperBowl XXXV halftime show on January 2001. On March of the same year, Just Push Play was released, and succeeded to reach platinum quickly. The band was also inducted into the Rock and Roll Hall of Fame, and is the only band to ever do so with a song active in the charts.

On 2004, the band released their long promised blues homage, Honkin’ On Bobo. The album was a nod back to their blues rock roots, with live recordings showcasing the good old grit they started from. Aerosmith also toured with Motley Crue for the Route of All Evil Tour in 2006, but Tom Hamilton was left out following news of him receiving treatment for throat cancer.

2007 saw the band’s Aerosmith World Tour 2007, the first in nearly a decade, which included dates in Europe, North and South America, and Asia. After touring, the band once again headed to the studio for a final studio album. This also saw the band’s inclusion to the popular video game Guitar Hero, with a standalone game called Guitar Hero: Aerosmith, which Joe Perry said was a collaborative effort between the band and the developers. The game also spearheaded the Aerosmith/ZZ Top tour of 2009, which was ended unexpectedly due to Tyler being injured by the shoulders.

By the year’s end, Steven Tyler suddenly pulled out of a South American gig to pursue solo endeavors which included his autobiography Does the Noise in My Head Bother You?. Perry said the band wasn’t in contact with Tyler for a while now, and was seeking a new vocalist for Aerosmith, where Lenny Kravitz was approached but ultimately declined the offer. Fans were relieved when Tyler joined the Joe Perry Project in November 2009 and assured them that he isn’t leaving the band any time soon.

However, talks of a replacement surfaced once again in 2010, with Joe Perry worried about the downtime Tyler’s leg surgery costing the band almost two years in idling. Tyler responded with a cease and desist notice and threatened to sue the band and its manager if they didn’t stop.

May 17, 2010 saw the beginning of the Cocked, Locked, and Ready To Rock Tour which spanned North and South America, and dates in Europe. Tyler was once again on hot water for joining the judges of American Idol without prior consultation from the band.

2011 to the present – Music From Another Dimension!, Las Vegas Residency

The band released its 15th studio album Music From Another Dimension!, on November 2012, now focusing on a heavily electronic pop sound. The band also underwent the Global Warming tour which ended in 2014, with 86 completed dates from America to Asia.

The band toured with Slash with Myles Kennedy and The Conspirators in 2014 in North America, followed by a 17 date European tour. After a string of solo work and side projects,the band went on the Rock ‘N’ Roll Rumble Tour in 2016, and the Aero-Vederci Baby! Tour on 2017.

At the time of writing, Aerosmith is currently taking a break from the recently concluded first leg of the Deuces Are Wild concert residency in Las Vegas, which started on April 6, 2019, and will conclude on early December of the same year. Perry also announced that he and Tyler are set to work on a new album earlier this year.