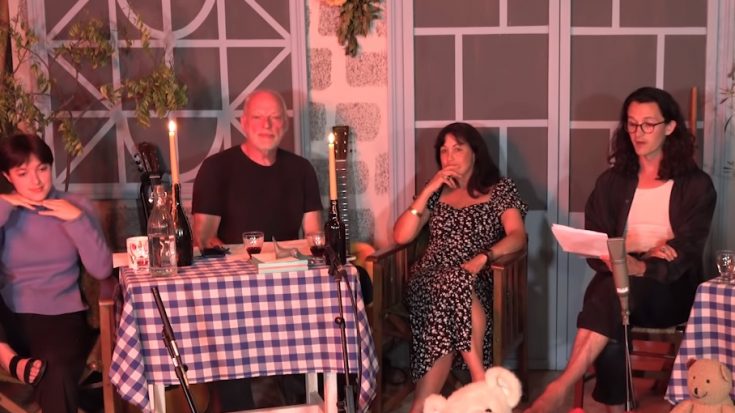 Gilmour has been honoring Barrett by keeping songs from 1967’s The Piper at The Gates of Dawn in the setlist of both Pink Floyd and solo endeavors, even if he wasn’t part of the record. He also helped the struggling ex-Floyd member with his solo career, The Madcap Laughs and Barrett. Now, Gilmour acknowledged his predecessor by performing “Octopus” from The Madcap Laughs and Barrett’s “Dominoes.”

In the stream, Gilmour announced that he is currently editing a collection of Barrett’s lyrics, saying, “The lyrics have never been printed properly. Syd never wrote them down. They were never properly transcribed. There are all sorts of different versions of all of them.” He also explained that “Dominoes” was as straightforward as it is, and said that it was his favorite song from Barrett.

Gilmour also went on to expound on the origins of Pink Floyd, specifically his relationship with Barrett. “He was this maverick writer and leader,” he said. “He was a couple of years younger than the other guys, but he was very, very bright. Somehow, very, very sadly, he lost his mind. There are all sorts of theories as to why he lost his mind, and certainly I suspect it was exacerbated by his drug use. But he was an enormous amount of fun and a brilliant poet.”

He also alluded to Barrett’s lyricism, saying, “It was very similar to the way that he talked. You’re struggling to get to grips with what he’s meaning. It’s not gobbledygook; they definitely mean something to him, but there’s a sort of a barrier between him and me and anyone else that prevents us from being able to hear it. … That’s what it was like to talk to him in that period, 1969, 1968, ’70.”

The guitarist does this weekly live stream with his family titled Theatre For Dreamers, which was named after his wife’s (Polly Samson) latest book.