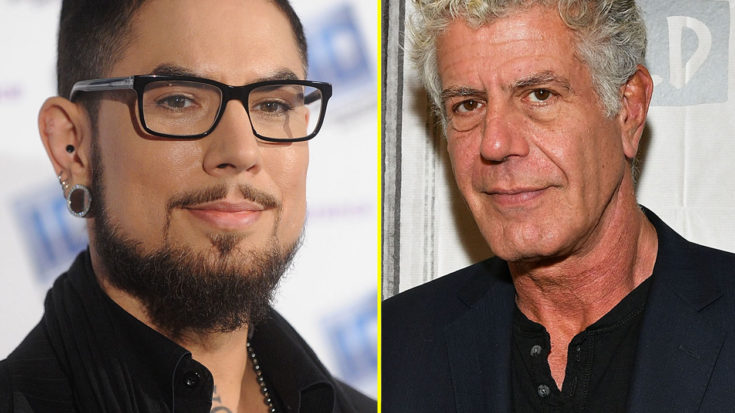 Within mere days of each other, two brilliant souls who brought color into an otherwise gray world were gone – tricked by depression into believing that the world is somehow better off without them (spoiler: it’s not).

While their respective deaths made folks a little uncomfortable as they were forced to accept the reality that depression doesn’t discriminate based on how much money you have, how hot your girlfriend is, or how great your life looks on social media, they did something else far more important.

They opened up an important conversation – one that’s long overdue – about how we treat mental illness and suicides.

Leading the charge is Jane’s Addiction guitarist Dave Navarro, who took to social media just hours after news of Bourdain’s death hit the airwaves. The 51-year-old rocker delivered a heartbreakingly real response to last week’s tragedies, calling upon his own experiences with depression to hopefully inspire someone – anyone – to reach out for safety if they felt themselves brushing up against the darkness.

Navarro posted a photo with a link to the Suicide Prevention Lifeline and stressed that while he couldn’t “speak to anyone else’s thoughts or actions,” he could and would speak from his own experience. For a moment, things got a little too honest, a little too real as he recalled writing his final letter and figuring out how his belongings should be distributed among his friends and family.

Then, the tide turned; Navarro talked about the bravest decision he’s ever made, the decision to reach out to anyone who would listen – friends, family, therapists, psychiatrists, anyone who could be a life preserver to a drowning man. As someone who’s been to the edge, looked into the abyss and lived to tell the tale, Dave Navarro was able to offer an even more important perspective that people in the throes of depression are in too much pain to consider: it can, does, and will get better.

“As the tide comes in and rolls out, the universe takes many shapes and constantly evolves. We are made of the same stuff. We are constantly changing and evolving and flowing…sometimes scary, sometimes beautiful, sometimes lonely, sometimes supported. Hang in there to allow the process and the shapes to change,” he asked, promising that he could say “100% that they do”.

I don’t know what you’re going through, or where you’ve been or even who you are. But I do know that Dave Navarro is 100% right; the shapes do change, and so do the circumstances that are overwhelming you. You’ve just got to hold on. Reach out if you’re finding it hard to make it to the next sunrise; I promise you, it’s worth it.

You rock. Each and every one of you, and you matter. If you or someone you know is struggling to make it to the next sunrise, you’re not alone. Please, please, please reach out and get help – it can, does, and will get better.