After Engaging In A Guitar Battle, Conan O’Brien & Jack Black Get The Surprise Of A Lifetime 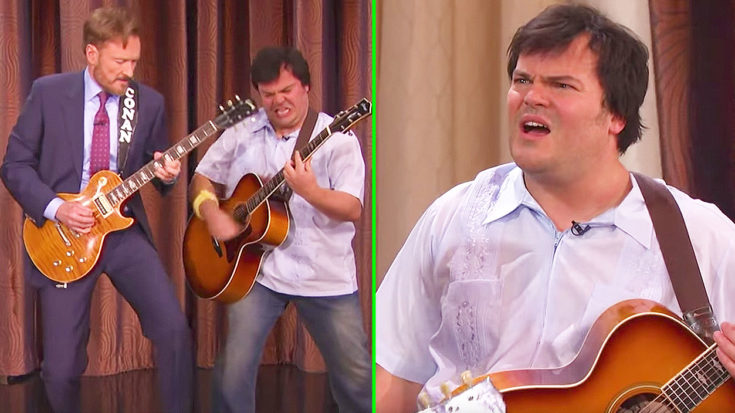 No One Saw This Coming!

Conan O’Brien is the best of the best when it comes to late night talk show hosts. He’s clever, funny, engaging, is a great interviewer, and truly appreciates the talent of his special guests. It also doesn’t hurt that he’s a big music fan!

Conan once had Jack Black on the show, and they started to discuss guitars and music. Jack Black has always been a major fan of classic rock, and has actually proven he can jam with the best of them on guitar. So, Conan and Jack engage in an epic guitar battle. They went from calm chat about stuff to trying to outshine each other while showing off their axeslinging skills. Things definitely heated up when Jack argued that he’s in a “legit band” unlike Conan.

“I think of your band as more of a hobby, and less like a passion. I rock way, way, way harder than you.” – Jack Black to Conan

Jack jams out some classic riffs on an acoustic guitar, while Conan (seemingly) shreds an amazing solo on a Les Paul. At this point, we were all blown away and seriously impressed. Who would have thought Conan had it in him? Jack’s a great musician, that’s a given, but we didn’t know about Conan’s mad chops until now!

However, it’s soon discovered that Conan isn’t actually playing, and from behind the curtain a certain iconic guitarist appears proving it was indeed him playing Conan’s parts the whole time. It’s a hysterical moment that’s bound to make you chuckle! This is how you settle differences…. or not.

Check out the amazing video down below and let us know what you think! It’s entertaining and downright hilarious – what else would you expect from this Tenacious D frontman?