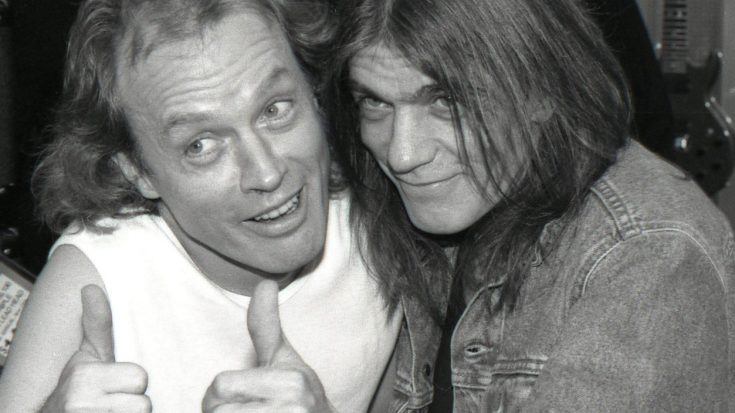 First and foremost, our hearts are with all who loved late rock legend Malcolm Young, who died last year at the age of 64. A fiercely brilliant musician whose rhythm guitar playing was an integral part of AC/DC’s sound and legacy, Malcolm left behind far more than a glowing legacy that spans half a century – he left behind a family that loved him dearly including younger brother Angus, with whom he built one of rock’s most respected and enduring bands and shared an incredible bond.

AC/DC took to social media in the wee hours of Saturday, November 18th to break the news of Malcolm’s passing, offering up sweet tribute to a man whose talent, vision, and sheer force of will turned him into an inspiration for countless musicians around the world:

It is with deepest sorrow that we inform you of the death of Malcolm Young, beloved husband, father, grandfather and…

A short time later, another post appeared on AC/DC’s Facebook page – this time, bearing a heartbreaking tribute from Angus Young, devastated at the loss of his best friend in the entire world. Though brief, Angus’ words brilliantly sum up the close relationship he and Malcolm shared and how deeply missed he is:

Today it is with deep heartfelt sadness that AC/DC has to announce the passing of Malcolm Young.Malcolm, along with…

“As his brother it is hard to express in words what he has meant to me during my life, the bond we had was unique and very special. He leaves behind an enormous legacy that will live on forever.

Crushingly, Malcolm’s passing only further compounded Angus’ grief as it was only one month prior that their brother George passed away at the age of 70.

In addition to Angus, Malcolm is survived by a sister as well as loving wife O’Linda, children Cara and Ross, son-in-law Josh, and three grandchildren. Our hearts go out to the Young family, AC/DC and the millions of fans around the world who never knew Malcolm but gladly called him a friend for over four decades.