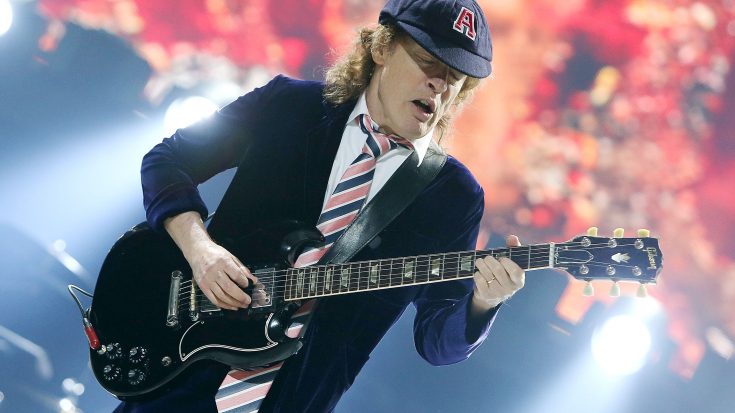 Angus Young emerged as a guitar hero from AC/DC, fusing different styles which gave the band a lasting impression in music. For many years, he has been hailed as one of rock’s finest gunslingers, inspiring hundreds of aspirants to pick up a guitar and learn from the master. But who among those guitarists did Young draw lots of inspiration from?

The answers were quite obvious: Jimi Hendrix, Chuck Berry, and Muddy Waters.

In an interview with Guitar Magazine, Young remembered the fleeting feeling he felt when he first heard of the wonders of Jimi Hendrix’s playing. In his teenage years, Hendrix appeared on the music scene, blowing the young Angus’s mind away. “And around when I was about 13-14, that’s when Jimi Hendrix appeared on the horizon,” Young said. “And when I first heard the song ‘Purple Haze,’ I was totally enthralled. ‘How’s he doing that?’ I was just so impressed with it. When along came Hendrix, you kind of went, ‘Woah! This is another level on guitar.’”

Going over to the next musician who inspired the Australian rocker so much was Chuck Berry. Berry became a symbol and an inspiration to many other bands and artists, ranging from the likes of The Beatles, Rolling Stones, and even Hendrix. And just like everyone else, Young was also captivated by “The Father of Rock n’ Roll’s” style. What he liked the most about the musician was how well he blended the different genres of music and mold them into a full-fledged rock madness. “So plain and simple, but it was so effective,” Young expressed. He also loved how easy it was for Berry to make his presence so powerful onstage, a technique Young frequently used whenever he does the signature “duckwalk.”

The last on the list is Muddy Waters. Waters, whose efforts in music tend to be overlooked by many, is viewed by the Australian rocker as his own personal hero. What he loved about the bluesman was how his records could bring joy and happiness to someone who listens to it. For Young, even if Waters’ choice of lyrics were either depressing or sad, there’s always the element of humor to it, turning the song into a happy-go-lucky one.