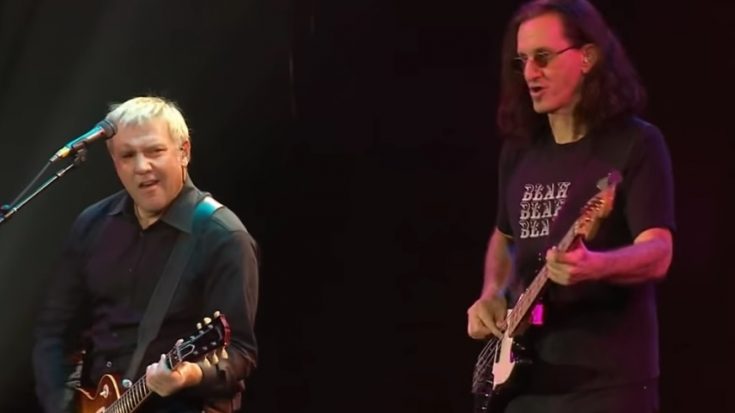 Rush guitarist Alex Lifeson has confirmed that he and bassist Geddy Lee have been talking about making new music together. “After we finished the last [Rush] tour in 2015, I started just writing on my own and doing some stuff,” he said in an interview with Make Weird Music.

He added: “Geddy was working on his book. We talked about getting together and doing some stuff together, but it got very, very busy for him, even after he finished writing the book — taking it on the road. So we never got a chance to sit down and start working or just having some fun together.”


Even with the delay, the two surviving Rush members are still open to collaborations. “We still talk about it, and I’m sure we will. Of course, now with the pandemic, it’s kind of wrecked things for a bit. But we’re both eager to get back together and kind of get back into that thing that we’ve done since we were 14 years old that we love to do. And we work really, really well together. So we’ll see what happens with that,” said Lifeson.

This isn’t the first time that the two hinted at potential collaborations, however. Lee has already said back in 2019 that the prospect was more than possible, although the passing of drummer Neil Peart was a difficult ordeal for the rest of the band. Lifeson said: “It’s been difficult. After Neil passed in January, I’ve played very little guitar. I don’t feel inspired and motivated.”

The guitarist has since felt better, however, saying that time has helped in healing the wounds. “For me, that first year of grieving is the milestone, and once you get past that, I think you … I don’t know, it’s an anniversary that you process, and it becomes a little easier to handle,” he said.

Lifeson continued: “With Neil, I’m always seeing pictures, and I’m always reminded of him, and all that stuff, and that was difficult, but now that it’s a year, I find that I think of the good times that we had together more than the sadness. And we had so many great times — we laughed so much over all those years. Aside from the work that we did and being a partner to one of the greatest drummers in history, and bass players for that matter, I just remember the laughing and the smiles and all of that stuff. So it rounds out the picture and makes it a little easier to move forward.”