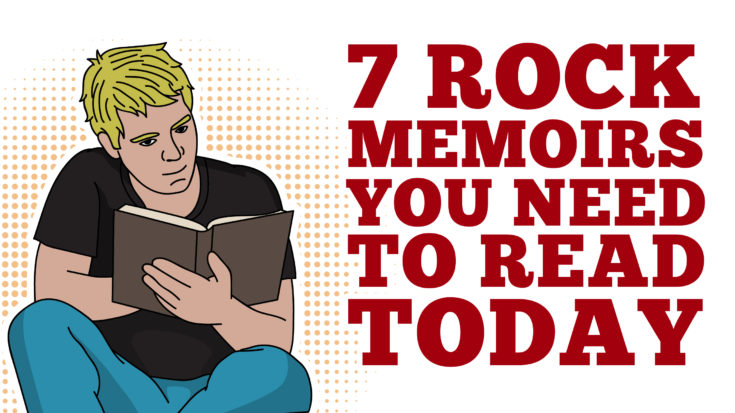 In a nutshell, there’s a common theme to the stories in these memoirs and that’s the musicians’ struggle towards stardom. And as they make it big, they experience the temptations of excesses and addiction. You may find clichés in some of them but the fact of the matter is, it inspires you to dream and never give up.

With all his craziness on and off stage, you know his autobiography is bound to be just as controversial. Ozzy Osbourne isn’t the type of guy who likes holding anything back. From his interviews to episodes of his reality show – he’s always all-out and transparent. This book starts at the time he was still a child and followed his life as a legendary rock star. New York Times-bestselling author and journalist Chris Ayres co-authored this due to Osbourne’s dyslexia. As expected from Osbourne, this is highly detailed and humorous, which readers absolutely loved. Most people claim that it’s among the most entertaining memoirs they’ve ever read. Even if you’re not a Black Sabbath fan, you’d still find this fun to pore over. All the crazy stories you’ve heard are here – the live bat incident included. And the opening line will surely get to you: “My father always said I would do something big one day.”

We’ve always looked up to him as a guitar god – someone who rarely makes mistakes. But this autobiography of his shows the legendary axeman in a different light – that he is human through and through. With all his success in this industry, his life was still filled with dissatisfaction, excesses and at some point, even self-destruction. This chronicles his life starting from when he was raised by his grandparents and never knowing who his father was. During his teenage years, he found comfort in his guitar and basically shredded his way towards rock stardom. The book also highlighted his collaboration with other legendary acts like Jimi Hendrix, Bob Dylan, and George Harrison. Drug addiction, alcoholism and tragedy – this is undoubtedly the tale of a survivor. There is so much poignancy and honesty in this memoir as Eric Clapton writes, “I found a pattern in my behavior that had been repeating itself for years, decades even. Bad choices were my specialty, and if something honest and decent came along, I would shun it or run the other way.”

3. Steven Tyler: ‘Does The Noise In My Head Bother You?’

This tells some of the craziest tales you probably have never even heard of. It’s a no-holds-barred account of what it’s like to be Steven Tyler – one of the most iconic frontmen and vocalists in the history of rock. The title pretty much sums it up but readers get a closer look into this charismatic man responsible for most of Aerosmith’s classic hits. You see, as the son of a classical pianist, Steven Tyler was definitely born to be a rock star. To anyone wondering what his life really is like, then here is the answer. The debauchery, the highs and lows of the band, the addiction and consequent rehab – it’s all here. Tyler didn’t skimp on the details. Here’s one random fact from the book: In the ‘70s, he smelled like a flower. He wrote, “I lived in black orchid oil. That intoxicating aroma. It’s now illegal to make it because of how many orchids they have to smush.”

4. Nikki Sixx: ‘The Heroin Diaries: A Year in the Life of a Shattered Rock Star’

Aside from random thoughts and musings, black and white photographs, and artwork, this book contains a year’s worth of diary entries by Mötley Crüe bassist Nikki Sixx. It follows the recording of the band’s fourth studio album – Girls, Girls, Girls. It also chronicles Sixx’s heroin addiction, relationships, wild lifestyle, and depression. At one point, his dependence on heroin almost cost him his life when he overdosed. The only good thing that came out of it was that it propelled the rest of his bandmates to quit using the drug. It’s an inspiring story given that it was a very challenging year for Sixx – he hit rock bottom but eventually decided to pick himself up and start all over again. Earlier this year, though, it was reported that there were talks of adapting this book into a Broadway play. According to Sixx, “[The play is] almost complete. And most of the music is from SIXX:A.M. There’s a couple of MÖTLEY CRÜE songs in there, because it is my life. But the Broadway play is really written… Yes, it’s based on ‘The Heroin Diaries’ book, and the music plays to that, because it was the soundtrack to the book, but it’s a little wider scope than that. It will probably tell some version of your story, or my story. There’s a lot of issues within it, that if you broke down psychologically what ‘The Heroin Diaries’ is about, there’s a lot of issues with abandonment, family issues and survival. So it’s a really interesting play, and it’s actually quite hopeful.”

What we like about Slash’s memoir is how deeply reflective, thoughtful, candid and wise it is. And we enjoyed how he showed a clear portrayal of what the L.A. hard rock scene looked like back in the ‘80s. From his battle with addiction, the ups and downs of his legendary band Guns ‘n Roses as they fought they way to the top of the rock chain, his rollercoaster relationship with frontman Axl Rose – he shares it all and the book also tells his personal struggle with his own demons. This paints a different picture – that Slash is more than the guitar-wielding badass in all-leather ensemble. He survived the lawsuits, notoriety, addiction, rehab and even self-destruction. And in the midst of it all, he made it through. Our favorite quote would have to be this: “I’ve always had to do things my way; I play guitar my way; I’ve taken myself to the edges of life my way; I’ve gotten clean my way; And I’m still here. Whether or not I deserve to be is another story.”

It’s not easy being a rock star. By now, that is pretty much clear. Even when they were at the top of their game, they had to struggle against so many things – addiction, endless parties, self-destruction, and debauchery. While we didn’t exactly expect so much from Keith Richards’ memoir, this is surprisingly good. In fact, we’d go so far as say this is among the best autobiographies we’ve ever read. This is a lucid, detailed, and entertaining book as Richards takes us on brilliant and remarkable ride as a member of one of the greatest rock ‘n roll bands in history. He has seen and experienced it all – drugs, premature deaths of his friends, tumultuous relationship with bandmate Mick Jagger, and the highs and lows of fame. Def Leppard’s Phil Collen highly recommends this memoir, saying that this is “A completely humble account of what was the birth and height of rock-and-roll opulence and insanity, from one of the true musical-trailblazing pioneers of our time.”

Bob Dylan was awarded the Nobel Prize in Literature this year and if that says anything, it’s that this man has a way with words. You’ll be taken on a glorious and memorable journey with one of music’s most iconic acts. You will feel inspired, angry, nostalgic and everything in between. Through his eyes, we see the Greenwich Village folk scene, Woodstock, New Orleans and other magical places that influenced Dylan and his songwriting. It’s an awesome and poetic read. One of his memorable lines is, “I’d come from a long ways off and had started a long ways down. But now destiny was about to manifest itself. I felt like it was looking right at me and nobody else.”

Aerosmith’s Joe Perry said it best when he described Dylan’s autobiography accurately, “If Dylan’s incredibly creative life was the Mississippi River, Chronicles is like a bucket of water that he scooped out to give us a taste that was totally captivating, and left me wanting to drink more.”