5 Janis Joplin Songs You Have To Introduce To Your Grandchildren 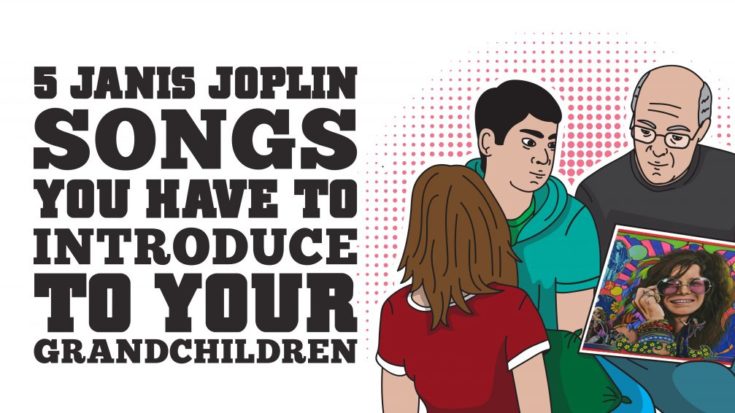 Let the young ones get to know the real queen of rock n’ roll!

While more and more grandparents are pressured to keep up more with the times and become tech-savvy just to connect with their grandkids, one easy way to form a bond with them is through music. You may find it surprising that when you introduce these youngsters to the rock classics, you’ll be seen as more hip and cool than old and boring. Music nowadays seems to have lost that gritty emotion and undeniable musicality songs from decades ago used to have and it’s only high time the next generation be reminded of them. Why not start off your grandkids’ music education to the awesome rock classics with the first queen of rock n’ roll of herself, Janis Joplin. You won’t be surprised these kids will be downloading and streaming Joplin’s greatest hits in no time.

1) Piece of My Heart

The kids have got to start with this iconic Janis Joplin hit from 1968. It was actually her cover of Aretha Franklin’s older sister Erma Franklin who first recorded it in 1967. It was Janis’ signature raspy blues vocals and ragged howls that made her own this song and turn it into a classic. Many artists such as Sammy Hagar, Melissa Etheridge and Joss Stone, Faith Hill and even rapper Shaggy covered this song and took it to the charts too but nothing really beats Janis Joplin’s rendition that remains her biggest chart success of her career. She also sang this song as part of her encore at Woodstock ’69 (another thing to tell your grandchildren about).  The message of the song about a lovelorn woman willing to sacrifice a broken heart if the man she’s in love it would just take it hits right through every listener’s heart when Janis pours out hear bluesy vocals charged with emotion during the line “take it, break it and have another piece my heart. Although she wasn’t the original singer, the song remains most associated with Joplin and no one else, really.

2) Me and Bobby McGee

No one can go through Janis Joplin’s discography without listening to “Me and Bobby McGee” at least twice. Not even young kids who are beginners in this world of classic rock. And grandparents, it is your job to guide the young ones into the wonders of Janis Joplin and her posthumously released hit Me and Bobby McGee. Written by country singer Kris Kristofferson the country-blues single reached the No. 1 spot in the U.S. singles charts as well as Joplin’s album “Pearl” (a vinyl record of Pearl would be a great Christmas gift idea). This song also made it to the history books as being the second single to hit No. 1 in chart history after the artist had passed away. A suggestion to introducing this classic maybe is to go on a road trip with your grandchildren and put this road trip -perfect song on while you tell of the its story about a couple who hitched a ride from a truck driver and sing as they drive through the American south. That’s a summer adventure to be excited about!

Another precious gem from her album “Pearl”, “Cry Baby” is a heart wrenching song that your grand kids will greatly appreciate especially once they’ve been captivated by the soul Janis’ voice brings. The opening wail to the track is just every emotion poured  out into a performance. It also teaches about forgiveness with Janis singing for her man to come back home even though she’s been hurt by him, she’ll forgive him and believe that things will work out in the end. Originally recorded by Garnet Mimms and the Enchanters, Janis again, covered it in 1970 and made it her own by putting her own signature blues-rock spin to the song. The song became a usual in Joplin’s repertoire and it was released as a single posthumously following her sudden tragic death in 1971.

Although this classic has already been covered well over 2000 times, only Janis Joplin’s bluesy rock rendition stands out and stands the test of time. Together with Big Brother & the Holding Company, this George Gershwin 1935 original was spun by Joplin in a raw and emotional way that is truly unforgettable. Even if your grandchildren are more into monotonous robotic pop music, by the time they listen to Joplin’s “Summertime” cover, they will feel the chills of unrefined emotion their robotic modern songs do not have. Interestingly enough, “Summertime” was originally written for the opera “Porgy and Bess”, so the way that Joplin turned an opera song into a blues-rock favorite that is molded into her signature style is somewhat revolutionary. Once your grandkid digests Janis’ powerful psychedelic chorus, there will be no turning back.

When talking about raw, powerful emotion in Janis Joplin’s raspy “whiskey-and-cigarattes” voice, “Try (Just A Little Bit Harder): is the song to back up that claim. Surely the kids would have even a slight idea who music industry mogul Clive Davis is, as he was also the one who aired an unreleased live performance of this tune by Janis Joplin on Friday night TV show in the seventies. This track one of the biggest highlights of her debut solo album ” I Got Dem Ol’ Kozmic Blues Again Mama!”. It really showed who Joplin was independent of her previous collaborations, a woman who is in control of her artistry. By the time you let your grandchild revel in this iconic Joplin track, you’d surely have a little fan in your hands, and you will be the coolest and hippest grandparent ever!