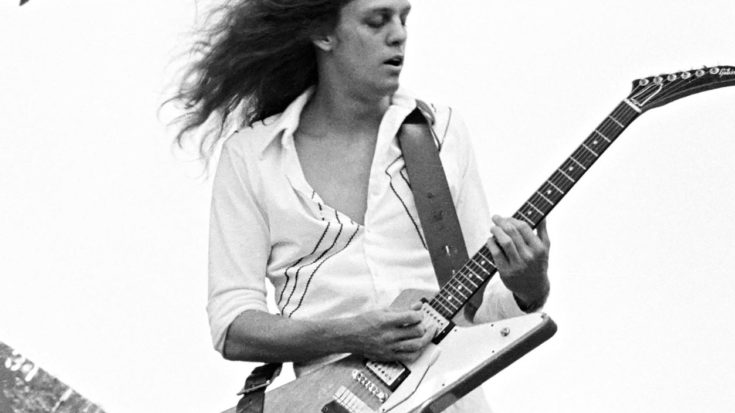 One of the most iconic songs of the 20th century, Lynyrd Skynyrd’s “Free Bird” is known for its profound lyrics, but more so for the blistering guitar solo performed by late guitarist Allen Collins. A world class musician, Collins played the entire solo himself on his Gibson Firebird, accompanied by guitarist Gary Rossington playing the rhythm parts on his Les Paul and the slide parts on his Gibson SG, effectively transforming “Free Bird” from a soaring ballad into a rip-roaring good time of a solo and one of the finest examples of guitar playing we’ve ever heard. Widely regarded as one of the greatest guitar players in the Southern rock genre, Collins’ talent is evidenced by how incredibly precise yet passionate he is as he tears through the song’s outro solo.

“The whole long jam was Allen Collins, himself,” Rossington says. “He was bad. He was super bad! He was bad-to-the-bone bad.

When we put the solo together, we liked the sound of the two guitars, and I could’ve gone out and played it with him. But the way he was doin’ it, he was just so hot! He just did it once and did it again and it was done.”

This isolated audio from the original “Free Bird” recording session is absolutely fantastic in that it’s Collins playing as he was meant to be heard; it’s incredibly clear, and for the first time we really get to hear the intricacies of what was voted the 3rd greatest guitar solo in the world by Guitar World magazine.

Lynyrd Skynyrd is hitting the road this fall and coming to a city near you – don’t miss your chance to see them LIVE! Tickets always sell out fast for such a legendary band, get yours now by clicking here!