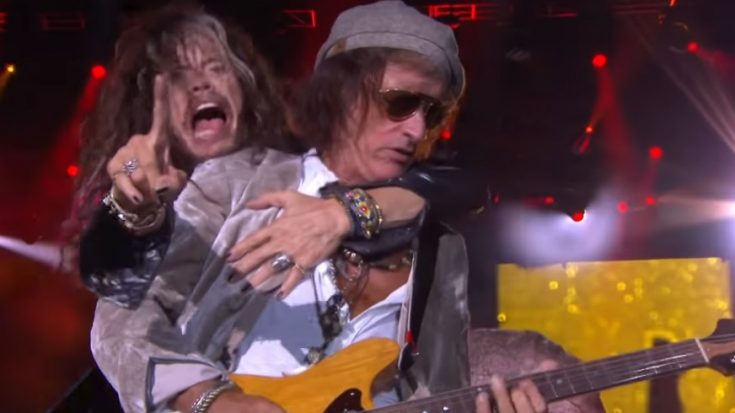 Can you imagine someone else fronting your favorite band instead of its tried and tested lead singer? Neither can we. While there are rock acts that have had a number of frontmen run through them, Aerosmith sure ain’t one of them. Steven Tyler has been instrumental not only in fronting duties but as the band’s chief songwriter as well. Here are some of the best live performances of Tyler to prove that no one can ever take his place.

Written by Tyler and Brad Whitford, “Last Child” is a soupy rocker from 1976’s Rocks, where the bad boys from Boston give it a raunchy live treatment in 2004’s You Gotta Move shows.

The power ballad from their succeeding comeback efforts in the form of 1989’s Pump has the band modify their hard rock sound with a pop twist. In this particular live performance, Tyler dishes out one of his best vocals to wow the audience, a proof that his voice has only become better as the years passed.

“Back In The Saddle”

Another great cut from Rocks is the album opener “Back in The Saddle”. While the studio version might be impressive in its own right, Tyler ups the ante in this 1977 live performance as he matches the gigantic riff of the song to deliver one of its most exhilarating renditions ever.

“I Don’t Want To Miss A Thing”

The power ballad that became bigger than the movie it was written for. Yes, “I Don’t Want To Miss A Thing” might not be the most Aerosmith-ic move the band has done over its extensive career, but it just shows their versatility in delivering music, especially in this live rendition from Japan.

One of the most enduring songs of the band, “Mama Kin” rightfully had a place in the live arena setlist of Aerosmith. Watch them rip it up in this super-gritty live version in Texas, 1977, where mistakes were made but all were forgivable given Tyler’s stratospheric energy levels.

How could we leave out the intense buildup of an intro that leads to a tasteful riff-driven progression of “Sweet Emotion”? One of their earlier tracks that gained the acclaim they deserved and propelled them to rock superstardom, “Sweet Emotion” is also a great live cut, especially in the Live Texxas Jam of ’78.

Redemption came a bit late for Aerosmith when they realized being all drugged-up wasn’t doing their career any good. “Dude (Looks Like A Lady)” had something new going for the band in terms of sound, but it was still the same old Aerosmith delivering the goods.

“Janie’s Got a Gun” is one of Aerosmith’s more controversial songs as it talks about sexual abuse, but that doesn’t take away the greatness of its writing and composition. This hook-laden masterpiece carries a brooding quality that Tyler channels with ease in this live Japan performance.

While most remember Aerosmith’s re-imagining of this song with Run D.M.C., the original version of “Walk This Way” still carries that powerful swagger that only Tyler can carry. You Gotta Move has one of the most bouncing versions of this song, which you can watch below.

Tyler’s self-penned hit for Aerosmith, “Dream On”, contains a powerful, lumbering sweep of a sound thanks to the bare instrumentation at the verses and the sudden explosion when the chorus hits. This live rendition from Woodstock 94 is no different except for the fact that Tyler gets to interact with the crowd as he sings with conviction.