10 Most Influential Artists of Classic Rock 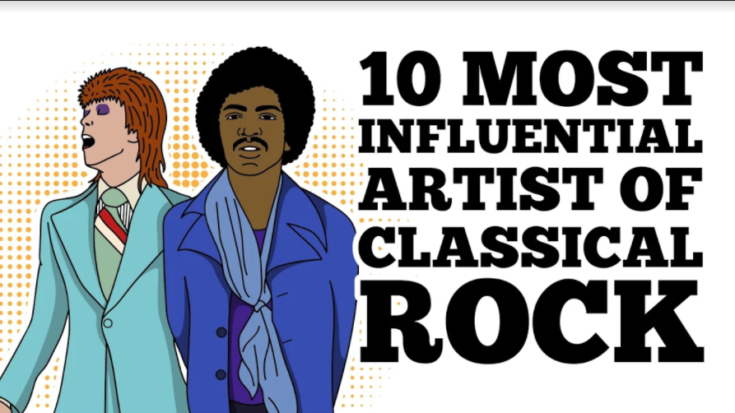 Legend has it that the following artists shook the earth’s core with such magnitude it can still be felt today. Classic rock is too vast that picking only a handful of the most influential musicians would lead to hours of nonstop debate. But we gotta do what we gotta do. And so more than fleeting fame (we keep saying “good music doesn’t expire in three months”), they’re notable for their influence over their peers and of course, the next generation of artists.

We understand there’s bound to be angry reactions and furious disagreements and well, what’s a classic rock post without that right? Fans of other genres may call us snubs but we’re all just passionate about rock ‘n roll and at the end of the day, it is rich with talent, groundbreaking innovations and these artists’ sweeping reach even decades after the height of their respective careers.

Now let’s explore their immeasurable contribution to the further development of classic rock.

Those who still think Jimi Hendrix is overrated need to go and listen to his songs on repeat. Did he get way too much credit and recognition? Definitely not, because he deserves every single one of them.

Did he singlehandedly change the sound of music? Well that’s for you to decide but the fact remains that he’s one of the most creative, innovative and influential classic rock artists of all time.

He may have taught himself how to play the guitar but his talent and skill as an axeslinger is undeniable. He allowed everyone to get into his head and “see” the music he visualizes.

Even minus the jaw-dropping showmanship (setting his guitar on fire or playing with his teeth), he took rock to a whole new level. The man was clearly way ahead of his time.

Eddie Van Halen gets a lot of hate but he’s probably immune to them by now. After all, love him or hate him, he’s laughing all the way to the bank. You may not even know it but you’re probably listening (and enjoying!) to some band Van Halen has heavily influenced.

From Eddie’s distinctive guitar tone and style to the group’s overall attitude and sound, it’s hard to deny how their music changed hard rock.

“When Van Halen started out, there was no path to fame. We just played what we liked. Even today it always comes down to the simplicity of rock and roll.” – Eddie Van Halen

We all have their self-titled debut album to blame. Any guitarist would acknowledge two truths after listening to that: it motivated them to practice for hours or it propelled them to burn their gear out of frustration and hopelessness.

Anyone who ever saw David Bowie in concert were always treated to a great spectacle – everything he did was a work of art. He was an artist through and through and it showed in his legacy to both music and fashion and of course, modern pop culture as a whole. Whether it’s glam, folk or hard rock, he managed to solidify his spot in the rock ‘n roll pantheon by pushing boundaries and testing limits.

If we had to describe him in one word, it would be “fearless.”

“The sheer amount of risk-taking and genre flipping throughout his musical life means his music has no boundaries when it comes to influence.” – Triple J radio announcer Zan Rowe

At a time when it seemed like there was nothing new to expect anymore, Bowie gave us something refreshing. He was an innovator and an original. He was different, unique and he was weird. And he embraced all that in the most fashionable way possible.

Where would rock ‘n roll be without its architect Little Richard? He was a key force in the birth of this genre. And he had his fair share of ups and downs career-wise, nonetheless, he always made sure his comebacks exceeded expectations.

He was wild, loud and just hands-down extraordinary – then again, all the rock greats are. You can hear his influence in the music of John Lennon, David Bowie, Jimi Hendrix, Smokey Robinson and Mick Jagger to name a few.

“Although he was only a hitmaker for a couple of years or so, his influence upon both the soul and British Invasion stars of the 1960s was vast, and his early hits remain core classics of the rock repertoire.” – AllMusic’s Richie Unterberger

He was called “Little Richard” because of his small stature. But his music was nothing of the sort – we did mention earlier that he was loud, right?

Where do we even begin with Queen? They had an extensive catalog of good music, legendary performances everyone strived to at least be on the same level with and eventually failed, complicated arrangements, spine-chilling vocal harmonies and they had Freddie Mercury. He was a musical genius, that’s kind of hard to dispute. Onstage, he was a force to be reckoned with – flamboyant, powerful and charismatic.

They released one rock anthem after another, filled stadiums and inspired other musicians to follow their footsteps.

“I used to take a nap in the van and listen to Queen. Over and over again and drain the battery on the van. Then we’d be stuck. That happened a few times. We’d be stuck with a dead battery because I’d listened to Queen too much.” – Kurt Cobain

Their massive influence includes musicians from different genres and generations – Metallica, Iron Maiden, Nirvana, Guns ‘n Roses, Def Leppard, Van Halen, and George Michael. These are just some among hundreds of those they have inspired.

On the heavier side of rock, Led Zeppelin is one of the most commercially successful bands of all time. They were innovative, revolutionary and highly influential. The perfect example is “Stairway to Heaven” – we know it’s not everyone’s cup of tea, some say it’s overrated and there are other tracks which are far better but let’s face it, as far as “influence” goes, this song is the real deal.

They didn’t just make rock ‘n roll music, they lived and breathed it.

“Led Zeppelin—talented, complex, grasping, beautiful and dangerous—made one of the most enduring bodies of composition and performance in twentieth-century music, despite everything they had to overpower, including themselves.” – Rock critic Mikal Gilmore

Whether it’s Aerosmith, Deep Purple, Dream Theater, Rush, Tool, The Ramones, Pearl Jam or Black Sabbath, Led Zeppelin made sure they left their mark in rock by influencing bands and artists of various genres, even pop!

Buddy Holly died more than fifty years ago at a very young age of 22, but he remains as relevant and influential as ever. If two of the greatest singer-songwriters of all time, John Lennon and Paul McCartney, studied his songwriting and performance style and even based their band’s name to his (The Beatles were inspired by “The Crickets”), then that definitely says a lot about his musical brilliance.

“[Holly] passed it on via the Beatles and via [the Rolling Stones] … He’s in everybody.” – Keith Richards

From The Fab Four to The Rolling Stones, The Clash, Bob Dylan, Elton John, Eric Clapton and Bruce Springsteen – his musical influence was huge and diverse. In fact, Don McLean’s iconic lyrics “The day the music died” referred to Holly’s plane crash.

And his voice – many have tried to imitate but arrived at the same conclusion – it was perhaps the most inimitable set of pipes in rock. Even with a short-lived career, he was able to reach generations of musicians – an accomplishment only a chosen few could achieve.

Would you believe there was a research conducted to prove that The Beatles “musically weren’t that important?” Wow, it doesn’t take a scientist, literally, to see the band’s cultural impact and how they changed the face of rock ‘n roll. They weren’t just four good-looking lads who had basic musical talents and skills.

They were multi-instrumentalists, talented singer-songwriters, innovators, risk-takers, and they were one of the best selling artists in the history of rock. Anyone who disagrees only has to scour YouTube and find thousands of cover versions done in different styles.

“They had already absorbed Buddy Holly, the Everly Brothers and Chuck Berry, but they were also writing their own songs. They made writing your own material expected, rather than exceptional.” – The Rolling Stone magazine

They were larger-than-life and for those who saw them as nothing more than a “mania,” they were terribly disappointed. They produced hit after hit, one legendary record after another. They were unstoppable and decades later, they’re still being revered by fellow musicians and you know, regular rock ‘n roll fans.

If we had to list down all the things Bob Dylan has contributed to rock ‘n roll, we’d have to make a separate list for that. He’s more than a literary genius, some of his other art works include paintings and drawings – some of which have been displayed in galleries. The man is passionate about his craft and it showed in his classic hits.

He wrote songs that stopped you cold and made you think. He had stories to tell and he told them in the best possible way.

“I knew that when I got into folk music, it was more of a serious type of thing. The songs are filled with more despair, more sadness, more triumph, more faith in the supernatural, much deeper.” – Bob Dylan

Bruce Springsteen, John Lennon, Johnny Cash, Neil Young, Pete Townshend, Patti Smith and Jerry Garcia – these are just some of the legendary artists who acknowledged Dylan’s significance in rock. Paul Simon once said that “He [Bob Dylan] defined the genre [folk] for a while.” and we couldn’t agree more.

We cannot dare speak of the word “influential” unless we include Chuck Berry. There’s no more solid proof than the fact that we’ve lost count of how many “Johnny B. Goode” cover versions there are. As if that’s not enough, his 1955 hit “Maybellene” is considered as the first rock ‘n roll song.

He was a musical genius who practically defined and refined the genre. He was a god even among his peers.

“Chuck Berry sadly passed away over the weekend. He was one of rock ‘n’ roll’s greatest poets. He will be missed but remembered by everyone who ever loved rock ‘n’ roll.” – Paul McCartney

He was consistent in his sound and you can still hear traces of his influence today. Musician Gary Clark Jr. was spot on when he said, “Simply put: If Chuck Berry had not been Chuck Berry, music would be different.” Amen to that.